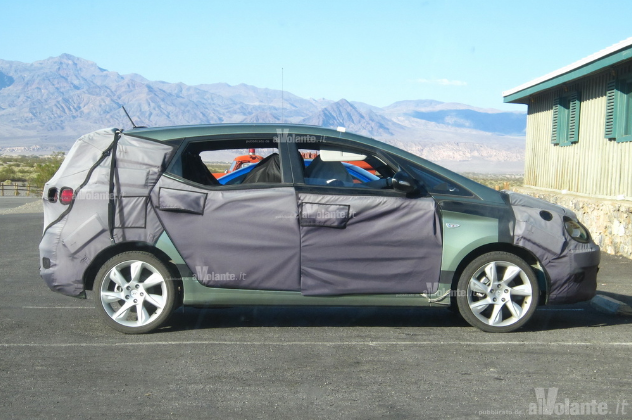 A surprise on the Death Valley roads, courtesy of a reader from AlVolante.it caught a new mid-size MPV developed by Hyundai. According to current models of Korean symbols, this van could be called i55 and should be officially presented at the Los Angeles AutoShow, scheduled for 18 to 27 November 2011 (or at most in Detroit in January).

The European version should make his debut at the Geneva Motor Show in March 2012 . In the form it should inspire the concept HED-5, presented at the 2008 Geneva Motor Show and characterized by a steeply raked windshield and side winding.

At the time the information on this van are scarce, but is said to have approved a cabin for seven passengers and will be equipped with the latest Hyundai engines, like the CRDi diesel engines 1.7/2.0 available in three power levels: 116, 136 and 184 hp. Should be combined with Start & Stop system and six-speed manual gearbox, with six-speed automatic as an option. For the US-spec version, Hyundai include at the first moment the kwnon 2.4 GDi Theta II engine with 201 hp. Will keep you informed!