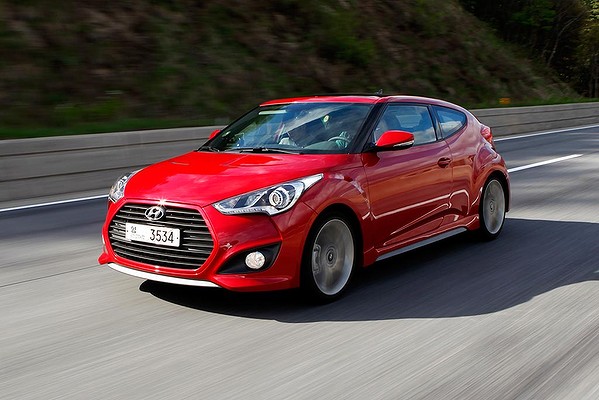 People from Drive Magazine had the opportunity to test the new Hyundai Veloster Turbo, for what they had to move to South Korea. Hit the jump to read his first impressions and see a video.

Koreans like their food hot. Kim chi, chilli fish, pepper sauce. But the nation isn’t renowned for producing hot hatches. Until now. The new Hyundai Veloster Turbo will take on the established hot-hatch/affordable sports car crowd with a 1.6-litre turbocharged (T-GDi) unit that pumps out 50 per cent more power (155kW) and almost 60 per cent more torque (265Nm). And it makes for a tasty dish.

Unlike some turbos, which tend to produce their power in an unwieldy rush, the engine offers linear, progressive power delivery, and finds its most enthralling point from 4000-6000 rpm, wailing from under the bonnet and pushing all the way to the red line. The sound of the engine is also much more appealing than in regular non-turbo model, with a nice intake whistle and a purposeful mid-range purr from under the bonnet.

Sitting on the freeway near Seoul in sixth gear and flooring the right pedal resulted in a smooth but still reasonably rapid surge, though dropping it back to fifth seemed a more fun alternative. The six-speed manual’s gear shifts were smooth, with a nice short throw to give it that sporty feel. The clutch pedal had good feel, though some may wish for a little more weight.

Power is sent to the front wheels and it gets down to the road nicely. Even on wet surfaces the Kumho tyres only lost their grip on a couple of occasions – and they are unlikely to be fitted to the Australian-delivered Veloster Turbo.

Although the new model’s suspension and steering will be tuned to suit Australian conditions by the local arm’s engineering team, the model we drove – a Korean-market version – proved comfortable and well-controlled.

It held its line well through corners and was nimble during quick direction changes, while on the straight stuff the ride was comfortable apart from the odd thump over sharped-edged potholes.

The steering reacted well when turning in to a bend, but did lack some feedback through the corner and there was a slight lack of response at lower speeds. However, pushing hard resulted in reasonable feel and no trace of torque-steer (where applying the power causes the wheel to tug the driver’s hands), or any unwanted kick-back through the wheel.

On first impressions it’s not quite as sharp as more expensive, manic cars such as the VW Golf GTI or Renault Megane RS250 – but we’ll reserve our final judgement until the car is launched locally in about October this year. While there have been plenty of changes under the metal, the new model’s appearance has also seen some tweaks.

The front of the Turbo model is dominated by its broad, blacked out grille, designed to swallow as much cold air as it can to help feed the air intake. At the bottom of the bumper, and all around the car, is a full lower extension body kit to give it that ground-hugging appearance.

Distinctive 18-inch wheels clad in low-profile rubber add some flair, as do the chubby twin exhaust pipes sticking out of the centre of the rear bumper bar. The oversized sunroof – which is expected to be fitted as standard on the flagship Turbo model – finishes it off nicely.

Inside, there have been a few alterations, too. The standard seats have made way for a set of comfortable, supportive, part-leather sports chairs with “Turbo” embroidered across the upright. They are very well bolstered yet still manage to keep your bum from going numb, even after several hours of sitting.

Also inside the model we tested was an upgraded eight-speaker Dimension stereo system that makes the already impressive unit in the regular Veloster sound average. The stereo on our test car was linked to a simple and intuitive touchscreen media system with integrated reversing camera and satnav – which should be added to the equipment list when it goes on sale here later this year. Our first taste of the spicier new Veloster Turbo has left us wanting seconds.