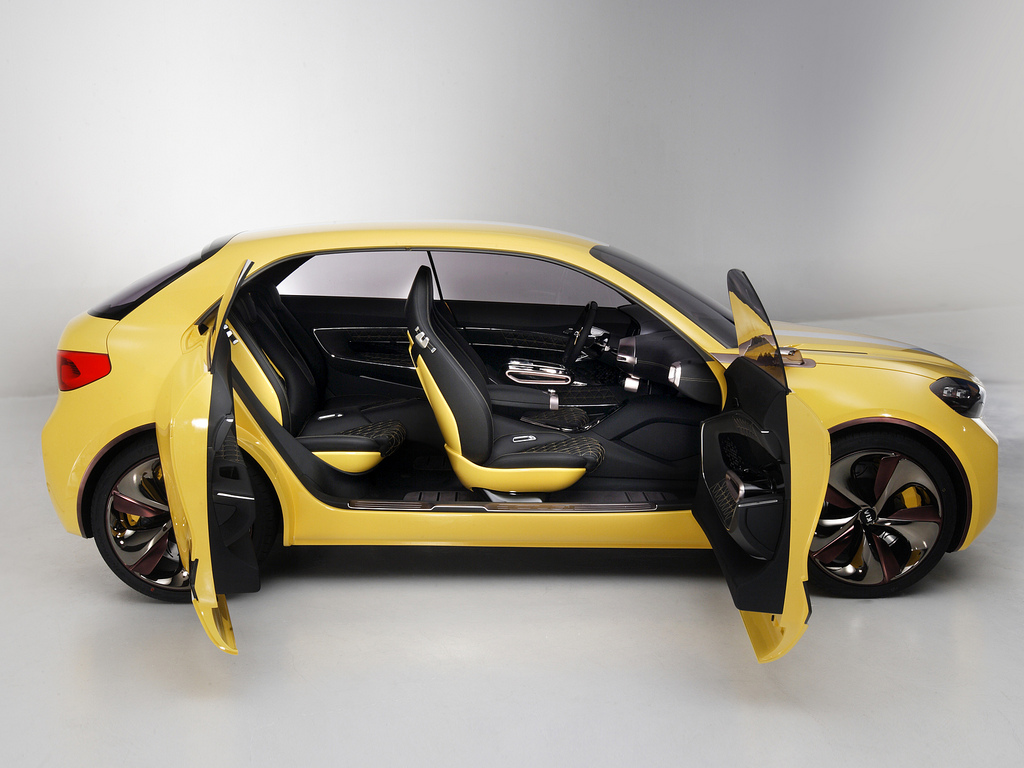 Kia Motors will reveal an all-new, compact, four-door coupe concept on Thursday, March 28th at the Seoul International Motor Show. The new Kia ‘CUB’ is less than four meters long and is styled to appeal to trend-setting urban dwellers.

CUB is both sleek and small, with a super-smooth exterior, a cheerful face, a daring character and headlamps that feature two-point LED lights – similar to those on the Kia Quoris flagship sedan.

Full details of the Kia CUB concept will be released at 11:10 a.m. (local time) during the Kia press conference on March 28th. Stay tuned!

Kia Motors sprang a major surprise on visitors to the 9th Seoul International Motor Show today in Korea with the world premiere of its all-new ‘CUB’ concept.

Designed at the Kia headquarters studio in Seoul, under the direction of President and Chief Design Officer, Peter Schreyer, the CUB is less than four metres long, has rearward-opening rear doors and an ‘access-all-areas’ interior concept without traditional B-pillars, providing excellent access to the luxuriously trimmed cabin.

The exterior styling of the CUB highlights that it is both sleek and small, with a cheerful face and a daring character. Design features created by Peter Schreyer for the 2007 Kia Kee 2+2 concept are revisited in a new form. The CUB’s nose has a broad wrap-around ‘mouth’ and there is a ‘dip’ in the top of the windshield – a motif that is featured on Optima, Sportage and cee’d models. The latest interpretation of the grille is a shallower design incorporating the turbocharger’s air intake, highlighted in the body colour.

The headlamps feature two-point LED lights – similar to those which first appeared on the Kia Quoris large flagship sedan last year. Large 19-inch alloy wheels fill the wheelarches and the front doors have aerodynamic ‘turning-vanes’ at sill level to streamline and add definition to the CUB’s flanks.

At the rear, LED tail lights complete the premium feel of the exterior and the nose treatment derived from Kia’s Kee concept car is replicated at the tail to accentuate the width of the vehicle.

The super-smooth exterior, with its flush glazing, minimum-drag wing mirrors and automatic touch-type door handles, promises ultra-low aerodynamic drag. A two-colour paint finish with a sporty stripe hints at the CUB’s high-performance potential, while the car’s broad track gives it an imposing stance.

With four individual seats, the CUB’s interior presents a unique ambience. The cabin creates the sensation of a luxurious coupe and is trimmed in black leather with yellow colour accents around the seats, door armrests and steering wheel.

The instrument cluster design is inspired by the eyes of a wild animal. The centre-stack design is minimalist with an air vent controlled by touch sensor. For extra safety, the steering wheel rim is capable of monitoring the driver’s biorhythms.

As well as a steering-wheel, there is a DIS (Driving Information System) controller connected to a gesture camera which provides easier operation while driving. With well-defined motions, drivers can set up each menu on the centre display. Hinting at the high-performance nature of the CUB, there is a footrest provided in the front passenger footwell.

The CUB powertrain features a new version of the company’s 1.6-litre GDi (Gasoline Direct injection) engine – recently confirmed as the powerunit for the new Kia pro_cee’d GT and cee’d GT sold in Europe.

Fitted with a twin-scroll turbocharger and strengthened internal components, the new engine generates 51 per cent more power (204 ps) and 60 per cent more torque (265 Nm) than the regular 1.6-litre unit. This engine enables both of Kia’s European GT models, with a six-speed manual transmission, to accelerate to 62mph in 7.7 seconds and reach a top speed of 143mph.

At present there are no plans to put the Kia CUB concept into volume production.