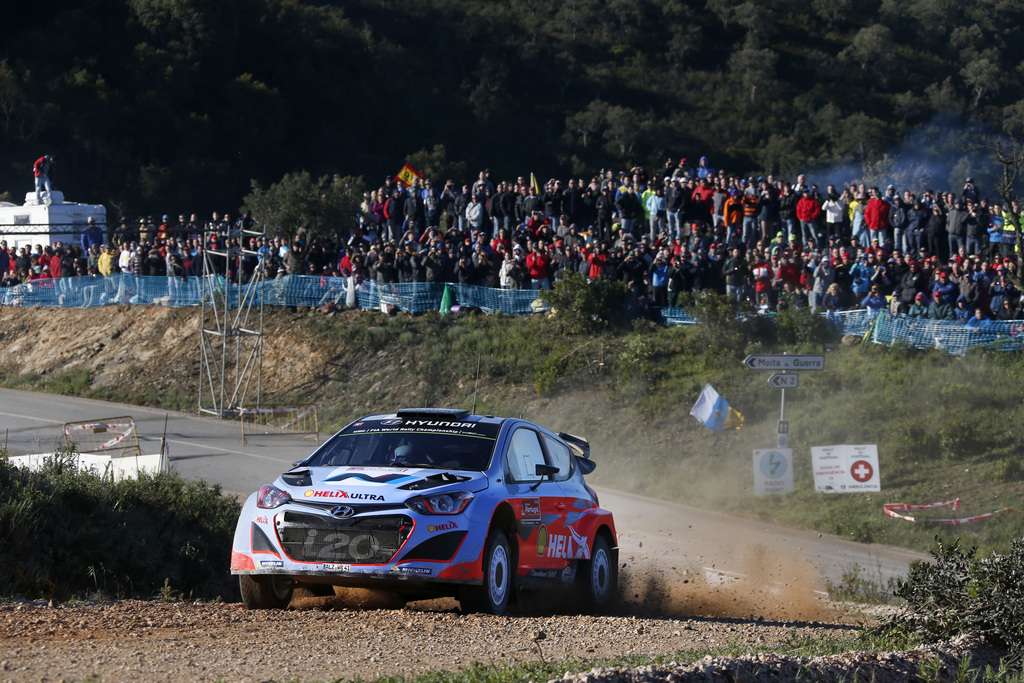 The Hyundai Shell World Rally Team has completed Rally de Portugal with two of its Hyundai i20 WRC cars after a tough event which saw the rookie team secure its debut stage wins in the FIA World Rally Championship (WRC).

Dani Sordo (#20 Hyundai i20 WRC, co-driver Marc Martí) took charge of a third Hyundai i20 WRC for this event and was in a solid fourth place heading into the final day. The Spaniard was cruelly robbed of a chance to fight for a podium after a broken front left driveshaft forced him to retire even before SS14 got underway on Sunday morning.

In his fourth WRC event as a Hyundai Shell World Rally Team driver, Neuville continued to help the team acquire more valuable experience In Portugal with a mature and professional performance. The Belgian driver adopted a cautious approach to the opening stages of the rally in slippery conditions, building momentum as the event progressed. He clinched a stellar stage win on Friday afternoon, his first with the Hyundai i20 WRC, and continued to show pace into Saturday. 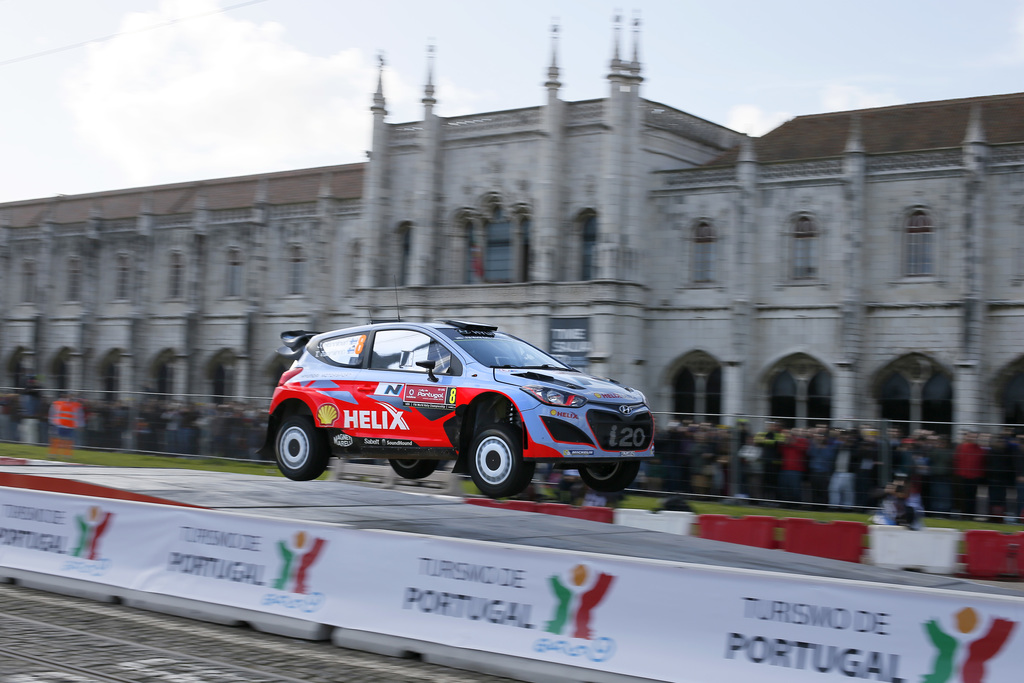 Unfortunately, Neuville damaged his suspension during Saturday afternoon’s longest stage which necessitated a slow end to his day in order to bring the car home. Despite losing a significant amount of time, Neuville fought hard in this morning’s remaining stages to finish in seventh place after picking up a transmission problem on the last stage of the rally.

Neuville said: “It’s been a tough rally for us but we have continued to fight and we have some positive elements to take away from Portugal. Of course, claiming our first stage wins on Friday was a highlight but I have been pleased with the performance of the Hyundai i20 WRC in demanding conditions. We had to make a cautious start but we made some key set-up changes and gained more momentum as the rally continued. A transmission issue meant I could not push for the Power Stage today, but we have made it to the end of the event which is always our top priority. We had a good rhythm this weekend and we can be happy with the progress we have made since the beginning of the season. Overall it was a good Rally de Portugal and I think we are getting more confident with each event.”

For Hänninen, this Portuguese rally has been heavily affected by issues outside of his control but he has battled hard to claim his best result of the season in his second event with the team. Although he clipped a tree with the co-driver side of the car which affected the handling on the last two stages, he has never given up and has shown top five potential on trouble-free stages.

Hänninen said: “It has been a difficult rally for us that’s for sure. From the first loop on Friday we have experienced issues that have hampered our progress but we never gave up. These things are part of WRC events and it is precisely why we are here as a team: to learn and build up our experiences with the Hyundai i20 WRC in a competitive environment. It has been a pleasure to be part of the team once again and to fulfil our objective of reaching the end of the rally. To bring the car home in the top eight is still an achievement for us and will give us something more to build on for the future events.”

Sordo helped the Hyundai Shell World Rally Team to a milestone achievement on Friday by taking two impressive stage wins in the morning loop to lead the rally after the third stage.

He continued to set some eye-catching stage times and came into the final day in fourth overall, just 20 seconds from the podium. Despite no sign of issues at service on Sunday morning’s service, the front left driveshaft on his Hyundai i20 WRC broke on his way to the first stage of the day, SS14 Loulé and he was unable to continue.

Sordo said: “Obviously, it is extremely disappointing to have had to retire from the rally, especially when we were in such a strong position. I was in the road section heading to the first stage this morning when one of the driveshafts broke and we were forced to retire. We have had a good rally with some stage wins on Friday and showing the pace of the Hyundai i20 WRC in these difficult conditions. I have had some incredible support and it is fantastic to see so many people getting behind me and the entire Hyundai Shell World Rally Team.” 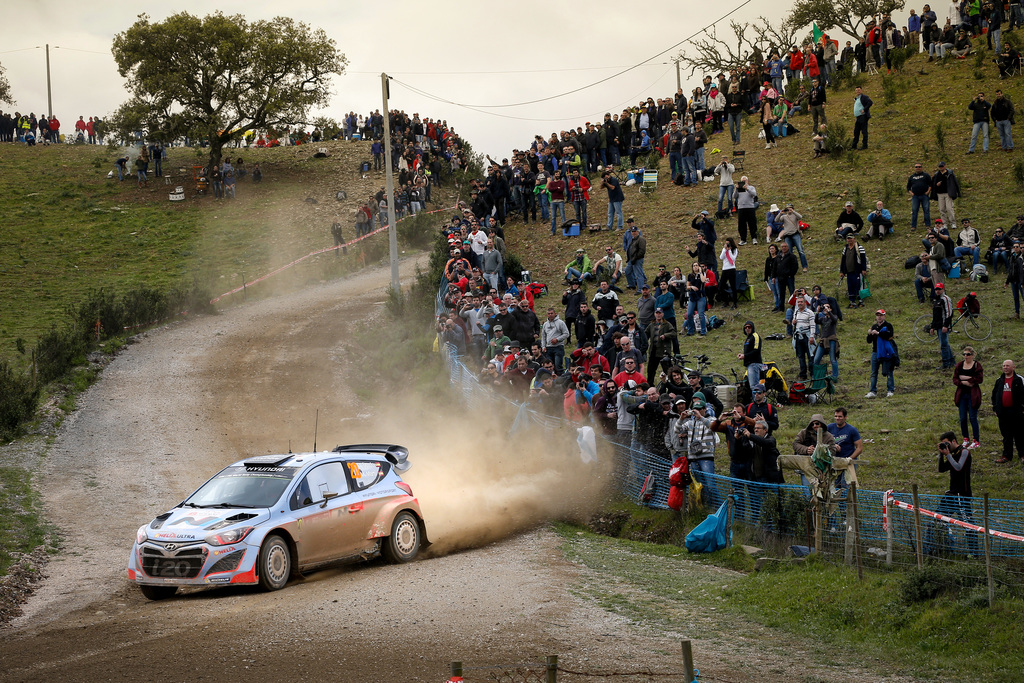 With valuable data and mileage from three cars, the Hyundai Shell World Rally Team will now regroup, investigate issues and learn from the experiences of Rally de Portugal as it prepares for the next round of the championship in Argentina. Taking three stage wins in its fourth event and getting two cars to the finish will give the team some positives to take away from a demanding event.

Team Principal Michel Nandan said: “Our target was to have all three cars finish this event and ultimately we have two cars in classified position but this has been no ordinary rally. We have seen a lot of incidents throughout the WRC field and our three drivers have all performed admirably in difficult conditions. It is easy to say that it’s just our fourth event but we have performed better than the end results show. We have worked efficiently as a team to run three cars for the first time, the drivers have navigated some slippery and unpredictable conditions and we have reached some very pleasing milestones. We claimed three stage wins out of six stages on Friday showing the performance of the Hyundai i20 WRC car. Our objective this year is not to win stages or score podiums but it is encouraging to see that we have the potential to do so. Thierry, Juho and Dani have driven very professionally this weekend and their combined feedback will be immeasurably valuable to us as we prepare for the next rounds.”