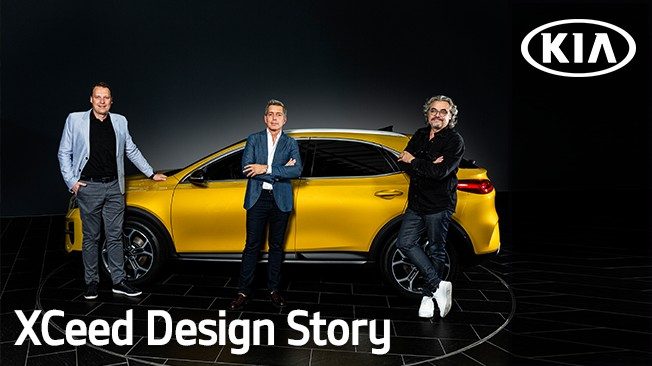 Kia Motors has today revealed the background to the creation of the new Kia XCeed urban crossover.

Speaking to camera for a new short film, published today by Kia, members of the brand’s European design team outline how the new model came into being for the first time.

The Kia XCeed is the latest model to join the Ceed line-up, alongside the new five-door hatchback, Sportswagon and ProCeed shooting brake. The full story of the Ceed’s three-generation evolution will be revealed in a new limited-run book, due to be released later this year, including how the new Kia XCeed and ProCeed came to life.

Gregory Guillaume, Vice President of Design for Kia Motors Europe, oversaw the design of the new Ceed range, a process in which the brand considered a range of options to replace the previous three-door pro_cee’d hatchback. “While creating the next ProCeed, we realised that there could be a fourth body type within the Ceed line-up. This became the Kia XCeed,” says Guillaume. “The beauty of the project was that we never originally set out to create a crossover.”

A sporty, urban alternative to the traditional SUV

Stylish, expressive and modern in design, the new Kia XCeed represents a sporty alternative to traditional SUVs. More athletic in appearance than its taller rivals, the new model offers something different to the other models in the Ceed range. The only body panels carried over from its five-door hatchback sibling are the front doors.

Laurent Boulay, General Manager Design Exterior for Kia Motors Europe, explains: “With the new Ceed family, we have managed to create four different cars which each meet a specific range of needs. None of them are the same, and the Kia XCeed has a different stance to its siblings.”

Instead, the Kia XCeed’s cab-rearward silhouette and fastback tailgate angle lend the design a coupé-like twist, matched by a relatively long bonnet. While the wheelbase remains the same as other models in the Ceed line-up (2,650 mm), the Kia XCeed’s front and rear overhangs are extended over the five-door hatchback model by 25 mm at the front (to 905 mm) and 60 mm at the rear (to 840 mm). A steeply-angled fastback tailgate, and a rear ‘deck’ trailing edge which sits 60 mm higher than that of the Ceed five-door hatchback, enhances its crossover aesthetic.

The car’s elevated ride height and body also present the same robust image that attracts buyers to the other SUVs in Kia’s product portfolio. The Kia XCeed’s ground clearance is 172 mm on 16-inch wheels and 184 mm on 18-inch wheels, a rise of up to 42 mm over the Ceed five-door hatchback. Wheel arch and side sill cladding and silver roof rails lend the car a tougher, SUV-like presence, with the metallic valance in the rear bumper enhancing this effect.

Boulay adds: “It’s elevated, but it’s not an SUV. It’s a car with a high seating position, but it’s somehow much more coupé-oriented. It’s a solution for those people who don’t want a larger, more imposing SUV, particularly in the city.”

An elevated driving position – and a sportier driving character to match

The same attitude has contributed to the development of the Kia XCeed’s cabin. Carrying over the same contemporary cabin architecture of its Ceed stablemates, the new model retains the driver-oriented centre console. Yet, with a lower hip point than a taller SUV, and raised ground clearance over a conventional hatchback, the Kia XCeed provides drivers with a sportier driving position allowing a better view of the road ahead.

“I think drivers will enjoy the new Kia XCeed”, comments Ralph Kluge, General Manager Design Interior, who masterminded the cabin of the new Ceed range. “It offers drivers a sporty character, combined with the elevated driving position of a crossover, so they can enjoy the best of both worlds.”

Like its siblings, a ‘floating’ touchscreen infotainment system stands proud of the dashboard, while the lower portion of the instrument panel provides a set of touch-sensitive buttons, dials and switches to control audio volume, heating and ventilation. Highly ergonomic in its layout and functionality, these controls have been designed to enable drivers to make quick changes to the cabin environment without taking their eyes off the road for any longer than necessary.

For the arrival of the new Kia XCeed, the brand has introduced its first fully-digital instrument cluster, a 12.3-inch high-resolution display which majors on clarity of information for drivers. Another first for the Ceed is Kia’s new 10.25-inch touchscreen infotainment system with navigation and UVO Connect. “The Kia XCeed’s digital instrument cluster and large central screen bring the Ceed into the modern world,” says Kluge. “Together they enable a more lively and vibrant presentation of information to the driver and passengers, and match the youthful, driver-focused character of the car.”

Colour also plays a role in bringing out the best in the new design of the Kia XCeed. Like its stablemates, the new arrival is available in up to 12 different exterior colours. But a vibrant new shade, Quantum Yellow, is available exclusively to customers of the new crossover.

Barbara Scheffler, Design Manager Colour&Trim for Kia Motors Europe, explains: “To me, it is important that we offer something that others do not dare to. Where other companies are seen as more conservative, Kia’s ‘power to surprise’ opens up colour possibilities for us. Quantum Yellow is the perfect match.”

“It could be the ideal colour for a young family man, who still wants a sporty look to his car, or for an independent, successful woman who wants to stand out and be seen.”

Also unique to the Kia XCeed is a new yellow colour pack for the interior, with black upholstery contrasted with vibrant yellow stitching for seats and doors, yellow seat piping, and a blend of gloss black and metallic yellow highlights throughout the cabin. “It’s not an age-related thing,” says Scheffler. “It’s for customers who are still young-at-heart, no matter their situation or status.” Designed, developed and produced in Europe, the new Kia XCeed will go on-sale across Europe later in the third quarter of 2019.

← Prev: Another Kia EV SUV Is On The Way Next-gen Hyundai Tucson Spied for the First Time →