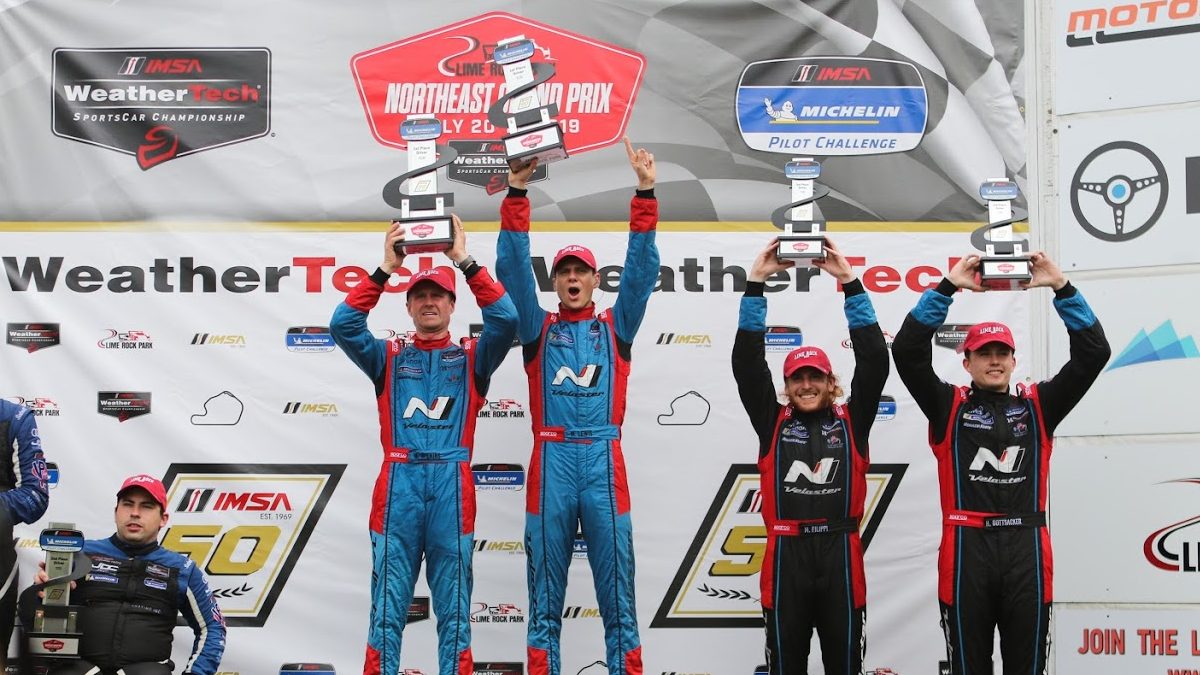 It was a flag to flag victory for the #98 Veloster N TCR car driven by Michael Lewis and Mark Wilkins and a third-place finish for the #21 Veloster N TCR with Harry Gottsacker and Mason Filippi.  At just 1.4 miles, Lime Rock Park is the shortest road course on the circuit, creating traffic challenges and today, due to extreme heat and humidity, a very slick racing surface.

Michael Lewis started from the pole for the second time this season in the #98 Veloster N TCR.  He had a terrific first stint and handed over the car in first position to his teammate Mark Wilkins at the 1-hour mark.  Wilkins kept control of the race pace, dominating the TCR class, lapping the entire field up to fifth place as well as many of the GS cars.  His gap over the field was so large that prior to his final stop the commentators said: “Wilkins could have a cup of tea during his stop and still come out in the lead, Hyundai really has this field covered.”    With just 30 minutes to go, the yellow flag dropped, creating a late-race caution period, which wiped out Wilkins massive lead.  The #98 crew had a perfect pitstop, and Wilkins took the restart from second because Todd Lamb stayed out on used tires in the Honda Civic, but Wilkins quickly passed him and re-took the lead.    Last year’s race winner, Stephen Simpson found pace in the #54 Audi late in the race and battled Wilkins for a handful of laps.  At one point, Simpson passed the #98 Hyundai Veloster, but there was no way Wilkins would allow it to stick, he re-passed the Audi and opened another lengthy gap before taking the victory, the second of the season for Wilkins and Lewis.

Harry Gottsacker and Mason Filippi were seeking redemption this weekend and found it, earning their first podium of the season in the #21 Hyundai Veloster N TCR.  Gottsacker qualified 7th but charged into the top five in the opening laps and up to second by the 25th lap.  Chasing the leader, his BHA sister car, Gottsacker challenged for the lead for the third time this season.  He turned over the car to co-driver Mason Filippi on lap 57.  Filippi raced hard in the top three throughout the last half of the race. By this point, the track temperatures were creating extremely challenging conditions, but the IMSA Rookie rose to the occasion and raced the #21 Hyundai Veloster N to the checkered flag in third position.

Catch all of the action from Lime Rock Park on NBC Sports Network Friday, July 26th, 2019 at 2pm.  Round seven of the 2019 IMSA Michelin Pilot Challenge takes place at Road America in Elkhart Lake, Wisconsin on Saturday, August 3, 2019.

It was a phenomenal day for the Hyundai Veloster N TCR’s and the whole team.  Everyone performed at an incredible level and our first double podium was a great reward for all of the effort.

What an awesome race, I have to congratulate my teammate Mark (Wilkins) on an incredible race. It’s awesome to get our second IMSA victory, it was a lot of hard work this weekend and give my thanks to Bryan Herta Autosport and Hyundai for a providing a really fast Veloster N. My stint was pretty straight forward, I was saving tires, so it wasn’t too hot or tough out there in my stint.  However, for Mark, he was working hard, especially after that restart he had an intense battle going with the Audi and the traffic was intense.  It was stressful after such a great lead to see the win come down to the wire…great racing all around.  I also want to congratulation the #21 car and Mason (Filippi) and Harry (Gottsacker)…it was awesome to have them on the podium with us, first as teammates but also for Hyundai.   It was an incredible day.

We won from pole position at @limerockpark! Thank you @bryanhertaautosport for the excellent @hyundaiusa #VelosterN race car and for the really fast pit stops! @markjeremywilkins drove an amazing final stint to get the win for us! He had a lot of patience around some lapped cars. July 26th at 2PM ET on @nbcsports is the race replay! Our teammates @mason_filippi and @harry_gottsacker finished P3 for a double podium finish for the team. Thank you to all of the fans at Lime Rock who attended the race, and to our friends who flew to see us race. There were so many fans. It was awesome. I am grateful to be on a great team. @atzeuli @rossr119 @nsmola44 #friends #grateful #hyundai #hyundairacing #connecticut #green #trees #nature #podium #win #passion #racecar #stance #stancenation #michelin #first #racing #fast #fastcar #fun #outdoors photos by @aaaaaaaandrew

I am so pleased with the double podium for everyone at BHA and Hyundai.  It was a short weekend and we got to work and pretty quickly found the sweet spot in the set-up right away and executed a perfect event.  Michael went out and threw down an incredible time in qualifying for our second pole, which was super important on this short track.  So, going into the race, we knew we had pace and a great car…we just weren’t sure how it would be with tires and the traffic with the heat.  My stint was straight-forward until that last restart. The Audi (Stephen Simpson) and I had an intense battle…it was the same battle in our field as the GS cars had in theirs and we had to work through their traffic in or to keep our gap.  It was intense and really hot.  We don’t really have any cooling, we have our water, but it is such a busy track, there really wasn’t a chance to drink any. When I hung up my suit after the race, there was a puddle beneath it!  Intense, but incredibly satisfying.  I also want to congratulate the #21 car…they were quick all weekend and executed perfectly.  I am having so much fun racing this Veloster N TCR car and can’t wait for the next round!

It was a great race today!  The Hyundai Veloster N TCR was really good, and it gave me so much confidence as I worked my way up the field.  Mason fought hard and drove the wheels off of the car at the end of the race and we were able to score our best finish.  The BHA crew put in great stops and had a great strategy to give us a great shot today.  I’m really happy to be able to give them a double podium!  I can’t wait for Road America in two weeks, it is my favorite track and it’s great knowing I am going there with such a competitive package in the Hyundai Veloster N TCR car.

It was an amazing weekend here at Lime Rock Park!  The Hyundai Veloster N TCR car was awesome and killed it on the high-speed momentum track.  Harry had a great first stint and I had a blast finishing the race.  Only a couple of weeks until Road America and I can’t wait to get back in the Veloster N TCR.