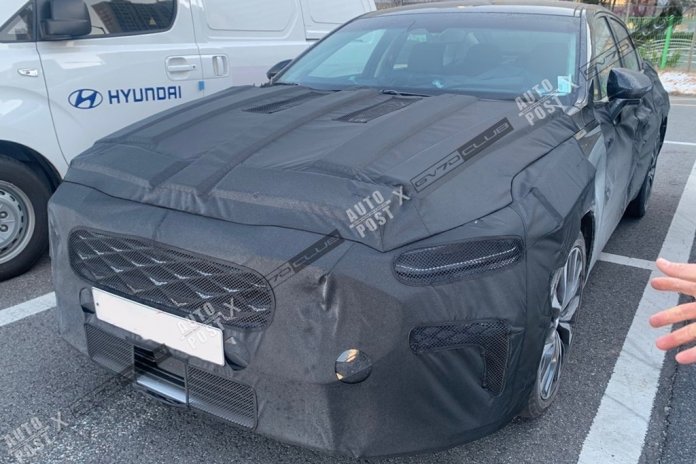 2021 could be a very important year for Kia Motors, now to be called just as “Kia”, the South Korean automaker will relaunch its brand image, with a new logo and slogan tomorrow, to be followed by big releases like the new K8 (the one that will premiere the new logo), the first dedicated EV vehicle or the arrival of the 5th gen Sportage. But while we wait until tomorrow, today we want to share with you again a new set of pictures of Kia’s upcoming sedan, including the new logo attached to it.

The existing replacement cycle, which was 5-6 years, has been shortened to 4-5 years. Since the news of the full-change already within less than a year since the facelift model appeared, many consumers said, “Hyundai Kia’s model replacement cycle is too fast.” He said, “How long have I been in the K7 Premier already, are we going to do a full change already?” So the 3rd gen K7 (to be called as K8) is expected to be released in the first half of next year.

About powertrain, Kia will keep the 2.5 GDi while will add the 2.5 Turbo GDi (could Kia launch a K8 GT-Line or even a K8 GT with this engine?) as well as replace the 3.0 GDi for the new 3.5 GDi engine. The hybrid will left the old configuration in favor of the new 1.6 Turbo + electric motor of the new Sorento or Santa Fe. When the P2 prototype will be released, it will be confirmed the possibility of having AWD.

Some claimed it was a Kia K4 test car (me too) that was a China-only model between K3 and K5, but who took the picture said, “I have checked the prototype label and was labeled as GL3.” so that corresponds to third generation K7, that it is expected to be renamed to K8.

The details such as the shape of the headlightss or taillights are not known yet, but we expect something like the K5 but more upscale. We have spotted an interesting details on the side style of the new K8, which has new exterior mirrors now attached to the door like in the K5 and an extended C-pillar line now has a shark fin antenna premiered on the Kia Proceed and followed by the all-new Kia Sorento.