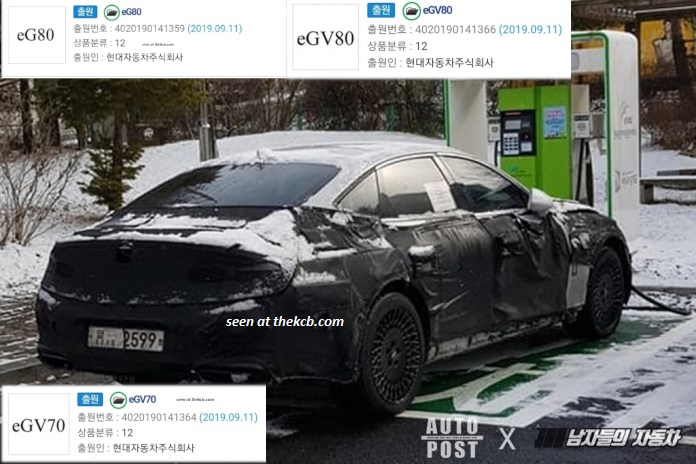 Genesis just unveiled their first SUV, the GV80 (codenamed as JX1), which it’s the first vehicle on a new dedicated rear-wheel-drive platform known as M3 and which will soon also slot under the long awaited next-generation G80 (codenamed as RG3). But the G80 is expected to be Genesis first electric vehicle. But there’s more, a trademark file shows Genesis have registered a completely range of EVs, with eGV80, eG70, eGV70, eG90. But even better is to see eGV90, the bigger SUV.

The current G80 was launched in 2015 and despite was selected to make debut before the GV80, was delayed several times and finally Hyundai Motor Group decided to release the GV80 first. Will there be a sport model of the GV80 in the future? Albert Biermann, the R&D head brought to the Hyundai Group initially to focus on performance, says he would love to see one, but is not in a hurry for that. Biermann is also a proponent of of EV and fuel-cell vehicles—the GV80 concept had a fuel cell—and Genesis is expected to launch a FCEV too at some point.

Also coming this year is the smaller GV70 compact crossover that shares a separate rear-drive platform with the G70 sport sedan; that model was introduced in 2017. Genesis has said it will have three crossovers, and MotorTrend confirmed this week that the third SUV will be an electric vehicle, likely midsize, on a new electric platform. It is coming next year, said William Lee, the global head of the Genesis brand.

Executives say they are also looking at whether the brand should get into the full-size SUV space—with, say, a GV90 to take on the Mercedes GLS and BMW X7—but that decision has not yet been made. Lee said the GV80 is the current flagship for Genesis and will be used to gauge the market for a larger SUV. It went on sale this week in Korea, where 1,500 were sold in the first day, a number large enough to surprise even those at the company. It will go on sale in the U.S. in the second half of the year, so expect it likely in the fall.

Genesis executives stated previously the lineup would have six vehicles by 2021. Initially the plan was for three sedans, two crossovers, and a coupe. Since that plan was conceived, Genesis has seen leadership changes and market tastes evolve. The new lineup plan is an even split of traditional sedans and crossovers, with an electric powertrain too.