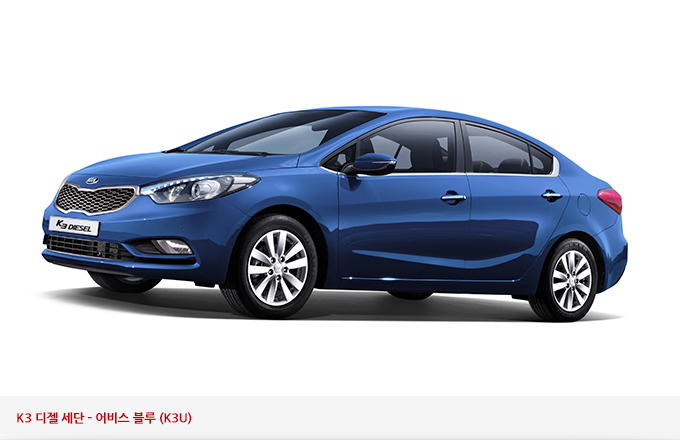 The first generation K3 sedan was released in September 2012. This year Kia launched also the Coupe version (K3 Koup) and the 5-door hatchback (called K3 Euro). The diesel-engine version of  the K3 compact sedan was launched in a event at the MVL Hotel in Ilsan, Gyeonggi Province, Thursday.

The K3 now be available with the 1.6-liter diesel CRDi engine like in the new Avante, with the Intelligent Stop & Go (ISG) system producing 126 hp and 279 Nm (206 lb-ft) of torque. This system stops the engine automatically and turn it on again when starting to reduce unnecessary fuel consumption at stops.

In addition, as pointed out the disadvantages of diesel engines are also take care of noise and vibration. Increased damping material thickness under the hood and between the engine and the interior with absorption Soundproofing Materials added to the engine block and the oil pan, and cover with additional coverage to block the influx of noise fundamentally unique diesel engine makes the driving noise is greatly reduced as the company’s said.

Also include heated steering wheel, fully dual-automatic air conditioning, rear heated seats, applied to such items as winter essential. Fitted with an automatic transmission, fuel economy is 16.2 km/l (38.1 MPG). The prices of the K3 Diesel range from 19.25 million won ($18,280) to 21.9 million won ($20,800). Could you buy this diesel version if Kia launch in other markets, like in the U.S.?