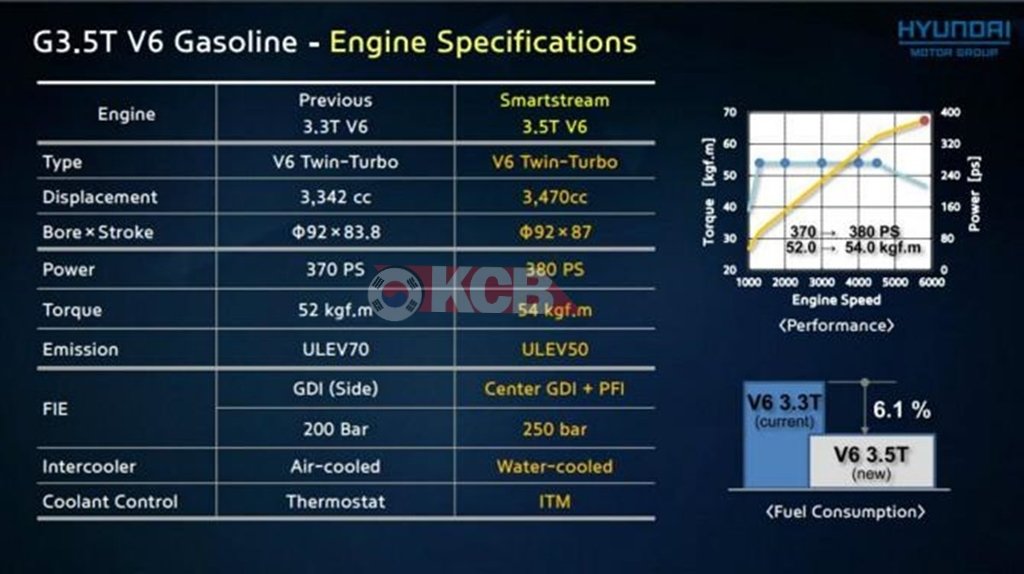 Hyundai has been hard at work increasing the efficiency of their motors for their next generation vehicles. Earlier today Hyundai Motor Group shared a little bit of their progress by presenting their latest improvements.

The 3.3 Twin Turbo Engine had been particularly known in the Hyundai G70 and its sister car the Kia Stinger GT. Stock out of the factory they crank out a respectable 375 horsepower and 376 lbs. of torque.  However, the engineers at Hyundai feel there is no replacement for displacement, so they increased the engine displacement to 3.5 liter by increasing the stroke of the motor from 83.8 to 87mm while keeping it twin turbo charged. This modest increase in displacement has bumped their power by 10 ps (metric horsepower) based on their provided slides. However, other upgrades suggest they are being rather conservative with their horsepower ratings. Other upgrades include, a new fuel injection systems that bumps up pressure from 200 to 250 bar, and new water cooled intercoolers for colder intake temps which coincidentally contributes to more power.

Going Inline 6 for the Diesel

Meanwhile what looks to be in Europe, Hyundai Motor Group has introduced their new diesel engine design and will be transitioning from their V6 engine configuration to inline 6. With the major change comes new materials by from cast iron to aluminum along with making the engine block a two piece with a bed plate. We will be curious as to know how well this engine will perform in the diesel world. For the most part the diesel world has favored the Inline engine design for decades which can be seen in big rigs all over the world.

What leaves me curious is their decision for an aluminum design vs cast iron. Although the weight differences and cooling capabilities strongly favor aluminum. Any major heat variances can lead to a warped block and blown head gaskets particularly in turbocharged engines. Hyundai however, seems to anticipated such cases and added a variable displacement oil pump to keep things lubricated as well as reduce friction and an electric thermostat to immediately adjust for any water temp changes.

Overall, it looks like Hyundai Motor Group is keeping busy with their engine designs. Although only Europe, it would be nice to get a diesel over here in the states but I guess we will have to wait till the time is right. In the meantime we will be enjoying the new 3.5 Twin Turbo which we guess will be in the next generation Stinger and G70 among other vehicles.