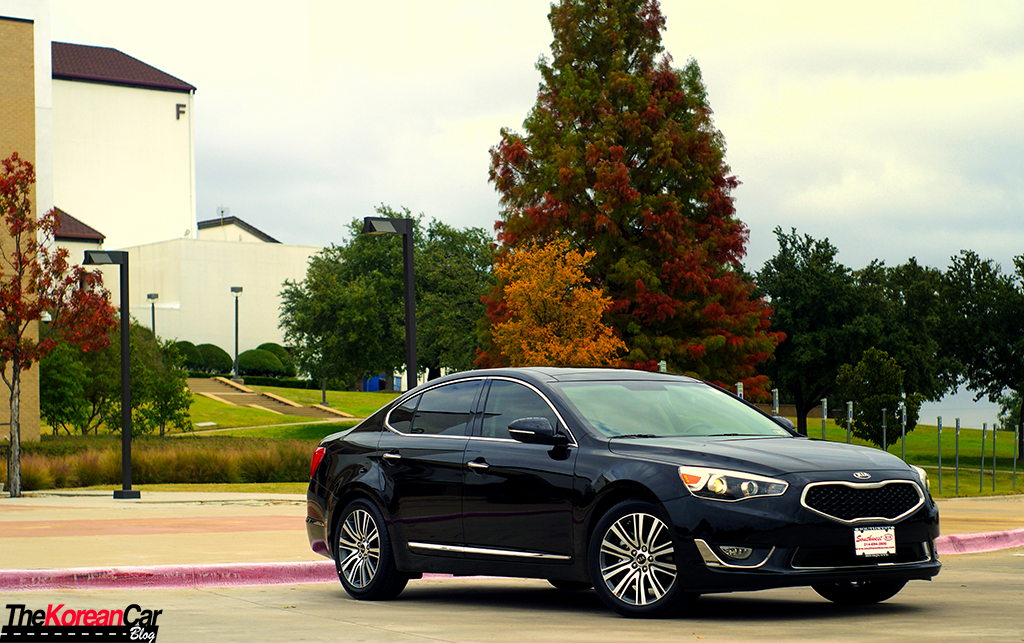 It has been a long time Kia has offered a D-Segment large sedan. Maybe you can remember the Amanti, which was last produced for 2009. Don’t feel bad if you don’t remember it. But, with the 2014 Kia Cadenza I’m sure that will be more a memorable one for you. The Korean carmaker decided to introduce the Cadenza one year ago, taking advantage of a facelift of the original Cadenza (only available in UAE markets).

[ads id=”0″ style=”float:left;padding:5px;”]The Cadenza is a FWD premium sedan, longer and wider than the Optima mid-size and using the same platform of his cousin, the Hyundai Azera. Under the hood, it’s available with 3.3-liter V6 gasoline direct injection (GDi) with 293 horsepower along with a six-speed automatic.

Like all current Kia models, the Cadenza was designed by Peter Schreyer – also known as the father of the Audi TT. From where we sit, the Cadenza is flashy enough to stand on its own among luxury sedans while still being recognizable as a Kia. Perhaps one of the more impressive elements of the Cadenza’s design is that it looks nothing like its sister car, the Hyundai Azera, while also managing to create enough distinction from other Kia models that customers shouldn’t have a hard time cross-shopping brands like Lincoln, Acura and Lexus. 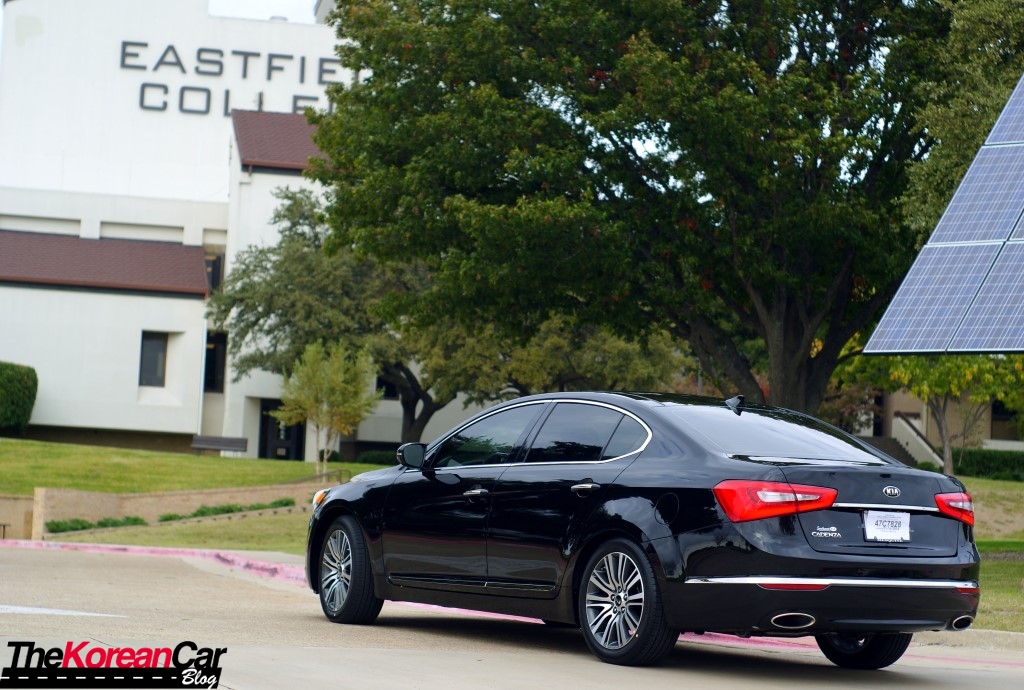 This segment has a handful of heavy hitters that are also worthy of your scouting report. The Chrysler 300 and Toyota Avalon similarly offer effortless performance, smooth rides and roomy, well-trimmed cabins. The former offers the option of muscular V8 power while the latter also comes as a hybrid. There’s also the Buick LaCrosse and Volkswagen Passat that, like the others, offer various powertrain options, even a thrifty turbodiesel in the VW’s case. Overall, though, we think Kia’s new 2014 Cadenza is an excellent choice for a large sedan. 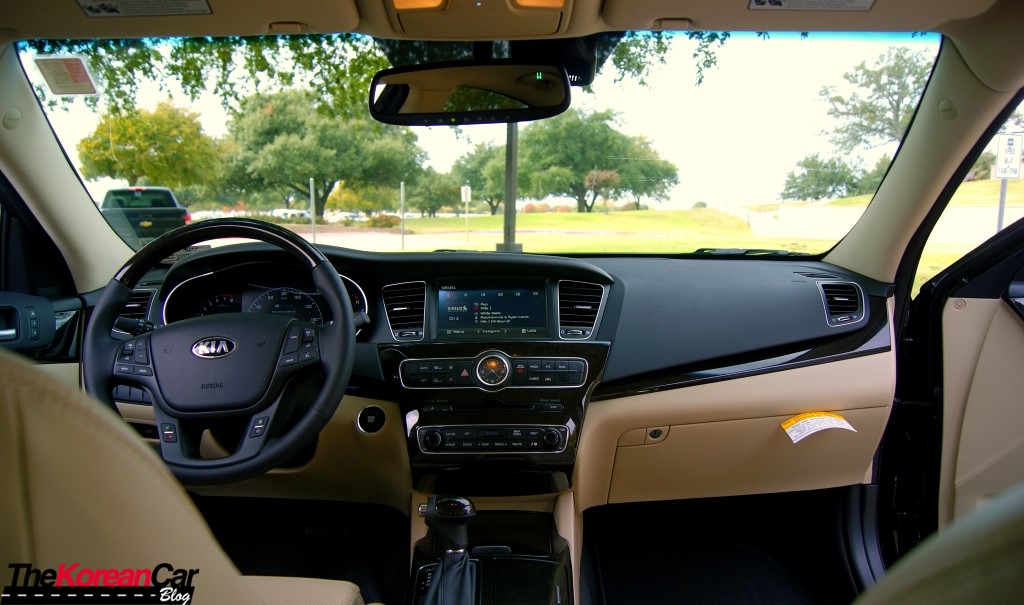 The only powertrain choice is an all-aluminum, 3.3-liter V6 making 293 horsepower and 255 lb-ft of torque along with a six-speed automatic transmission. Kia considered adding all-wheel drive for snowy states but ultimately decided front drive was sufficient. The company also explored dropping the Optima’s optional turbocharged four (it makes about the same power) into the Cadenza but decided it didn’t fit the car’s relaxed vibe. The six certainly isn’t any less relaxed when it comes time to hustle. It feels far stronger than its ho-hum specs suggest, and power builds linearly toward the redline near where peak horsepower and torque live. During the test drive, we have achieved 25 MPG fuel economy. The EPA estimates 19 MPG on the city and 28 MPG on the highway. 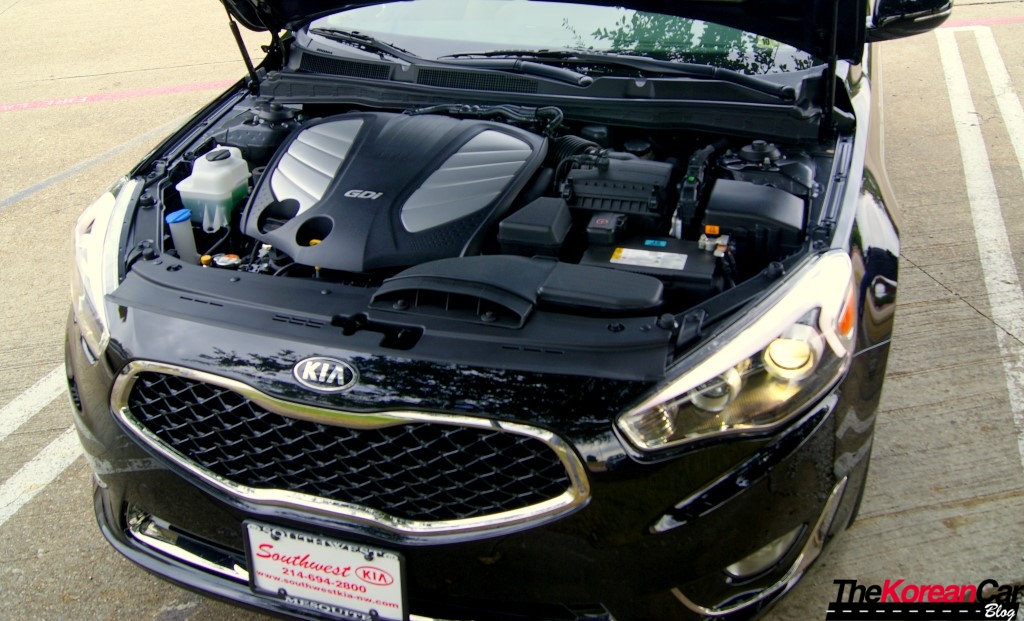 With almost 300 horses at its disposal, the 2014 Cadenza does a great job of motivating its 3,792-pound curb weight, but more than its power, the best thing about driving the Cadenza is its refinement. On just about any road surface, the Cadenza’s cabin is extremely quiet, allowing for easy conversations with rear-seat occupants even at highway speeds. Kia says its new flagship has a sport-tuned suspension, and we found the overall ride quality landed somewhere between a cushy luxo sedan and a firmer European sport sedan.

The compromise makes for a perfect long-distance driving car; during this first drive, we put about 200 miles on the odometer. Our drive route consisted mainly of tight and twisty roads, which are usually better suited for testing sportier cars than the Cadenza, but at least it packed a lot of steering and brake inputs into a relatively short trip. The Cadenza’s electric power steering outperforms many of its rivals in terms of feedback and overall lack of numbness, while the brakes are strong and responsive. Again, this isn’t a sports sedan, but we’re happy to report that it didn’t feel out of place along some of the best roads of Dallas has to offer.

Despite being loaded with upscale high-tech features, the Cadenza’s cabin manages to be cleanly styled and ergonomically friendly. Handsome design and quality materials are seen throughout, while controls for the audio, climate, phone and navigation systems are easy to find and use. The touchscreen in particular features large virtual “buttons” with logical placements. Along with Chrysler’s/Dodge’s unit, this is one of the best examples of this multitasking interface we’ve seen in any car, regardless of cost.

The Cadenza’s comfort is also top-notch, with plump, well-shaped seats front and rear that provide solid back and leg support. The cabin is roomy all around, though taller drivers may want to reconsider getting the panoramic sunroof, as it robs a few inches worth of headroom. A wide range of steering wheel and seat adjustments means drivers of all sizes should be able to get ideally situated behind the wheel. Kia knew that if it was seriously going to take on the luxury sedan market, it would need an interior that looked and felt the part. From a styling perspective, this is where the Cadenza shares the most with its showroom counterparts, but that is not necessarily a bad thing.

The same styling that makes the Forte and Optima look upmarket in their segments is even more pronounced and works well inside this big sedan. Sprucing up the Cadenza’s interior, just about all surfaces are covered in soft-touch material, convincing wood trim or soft leather, and Kia even focused on minor details when creating its lavish cabin, right down to the Cadenza’s key fob, which uses a piano black case with what appears to be brushed aluminum buttons. The one big disappointment we noted about its interior was that the buttons on the instrument panel and center stack look and feel identical to pretty much every Hyundai and Kia product currently available.

Comfort is another strong point, regardless of which seat your butt is parked in. The driver gets a 10-way power adjustable seat (including adjustable thigh support) with heating and ventilation, while rear occupants get heated outboard seats and 36.8 inches of legroom. That’s a few inches short of competitors like the Chevrolet Impala and Toyota Avalon, felt like it ought to be enough to accommodate all but the tallest of passengers. Also down slightly from its rivals are rear headroom at 37.3 inches and cargo space. The trunk is far from undersized at 15.9 cubic feet, but no, you cannot fit a credenza in the Cadenza. 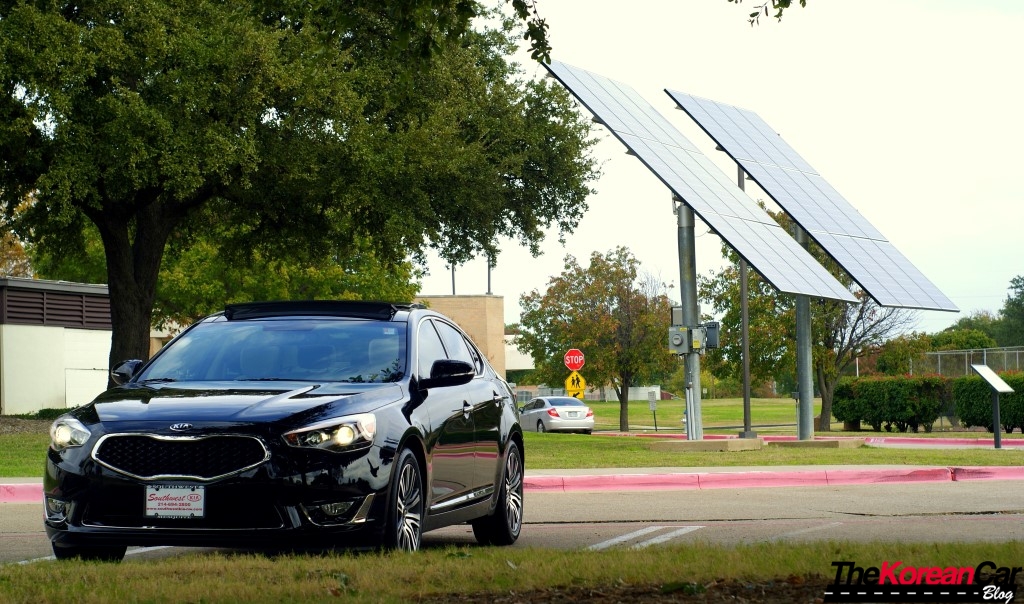 Thing that’s need to be improve on the 2014 Cadenza: Only one engine to choose, a base 2.0 T-GDi will be a good option. 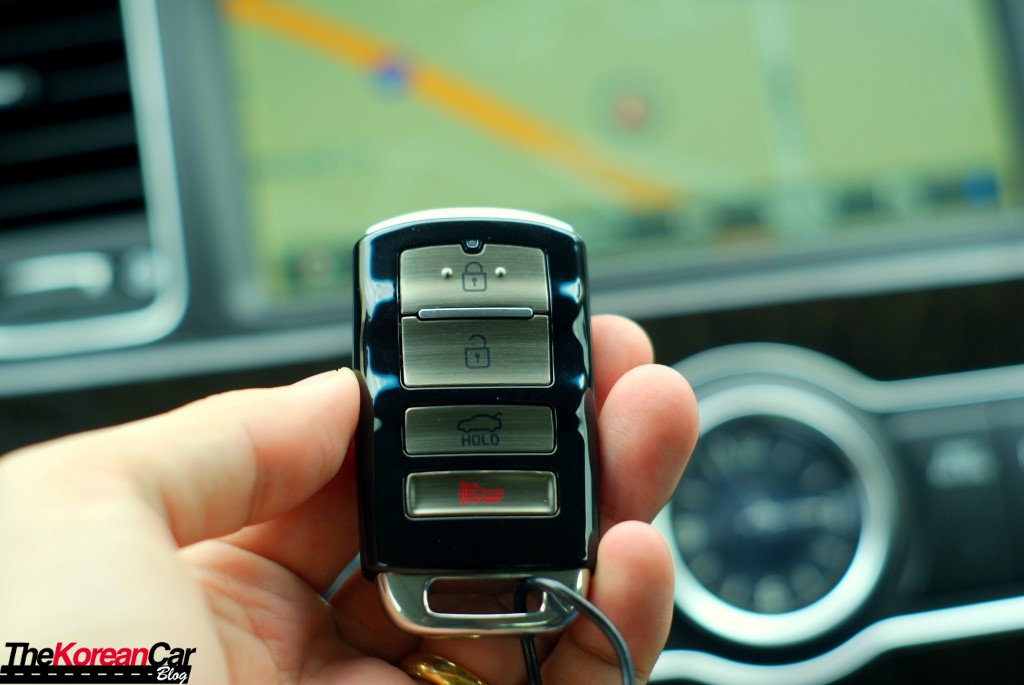 Thank you Southwest KIA Mesquite for letting us do the test drive. If you guys happen to live in Texas and you want to do a test drive or need more information, be sure to give them a call and get the best prices for that desire Kia vehicle you looking for.

And remember folk’s! As Bill Dickason says “If I can’t beat a new KIA deal in Texas, I’m just gonna give it to ya”.