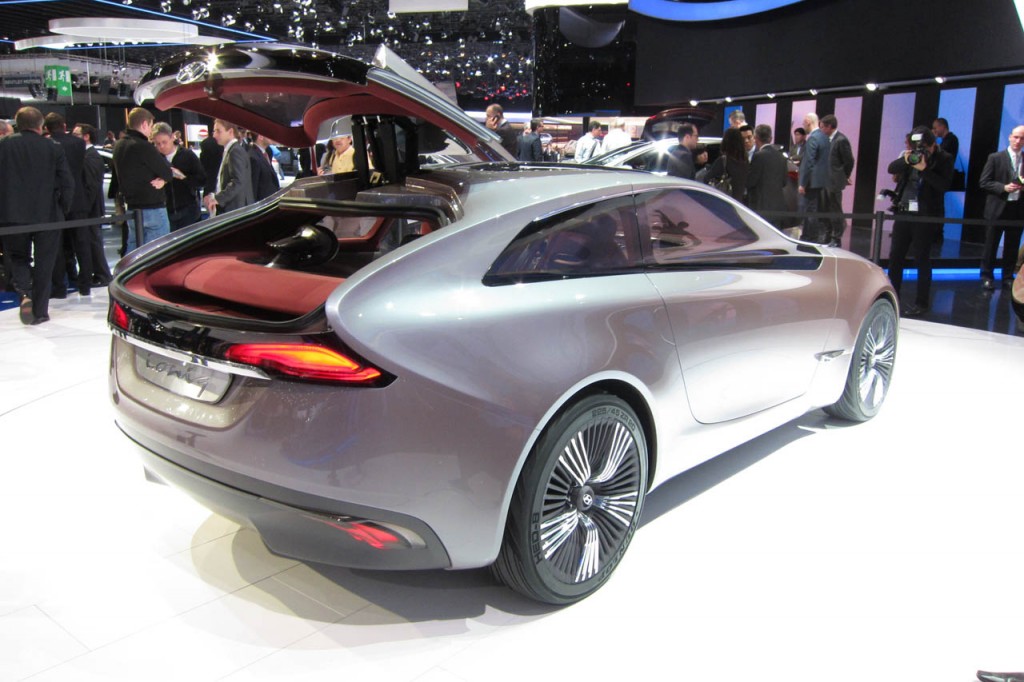 Hyundai has given a first glimpse of its new i-oniq concept car, which will preview the next evolution of the brand’s ‘fluidic sculpture’ form language.

The i-oniq concept was designed and developed at the company’s European R&D centre in Rüsselsheim, Germany. More information about i-oniq will be revealed ahead of its world premiere at the 2012 Geneva Motor Show, held in a few days.

Concept model is an electric sports hatchback with range-extender

Hyundai has unveiled its latest European concept car, named i-oniq, at the 2012 Geneva Motor Show, showcasing new technology and design which present an impression of the company’s future thinking.

The 4,4 meters long i-oniq is an electric sports hatchback with a range-extending petrol engine. Intended to convey the latest thinking from Hyundai’s designers and engineers, the i-oniq evolves the company’s fluidic sculpture form language and represents bold ‘New Possibilities’ with its futuristic powertrain.

The i-oniq concept car, designed and developed at Hyundai’s European R&D centre in Germany, is an evolution of the company’s signature design language, fluidic sculpture.

Thomas Bürkle, Chief Designer at the Hyundai Motor Europe Technical Centre, commented, “Two arched curves are the key theme behind i-oniq, creating a strong and playful contrast between sharp character lines and soft but muscular features. The profile lines of the front fender run from front to back, emphasising i-oniq’s coupé appearance, while offering maximum visibility to occupants.”

Further design elements, such as the ‘penthouse roof’ and LED headlights, emphasise the advanced technology encased within i-oniq.

The roof is a unique design solution that ensures great space for rear passengers and contributes to the overall dynamic appearance. The car’s doors open up to the side: innovative, weight-optimized door and seat kinematics make entering the car’s front and rear seats a simple manoeuvre.

Fittingly for a sporty hatchback, the cabin layout is driver-oriented, with the dashboard and centre-console geometry based around the driver. The user-interface components reflect contemporary and future consumer electronics technology such as movement control mounted on the steering wheel, floating instrument cluster with multi-layered projection, and a large background display for navigation, entertainment and other information.

The rear cabin area has been designed as a ‘cosy lounge area’ to ensure maximum occupant comfort, creating a positive contrast to the sports-orientated front area. Use of luxurious interior materials, as well as futuristic interface components, further expresses the evolution of fluidic sculpture within the car.

The i-oniq is powered by an innovative 1,0-litre, 3-cylinder petrol engine generating a maximum of 45 kW (61 ps). This unit is mated to an 80 kW (109 ps) lithium-ion electric motor which is powered by a 55 kW generator, via a single ratio gearbox.