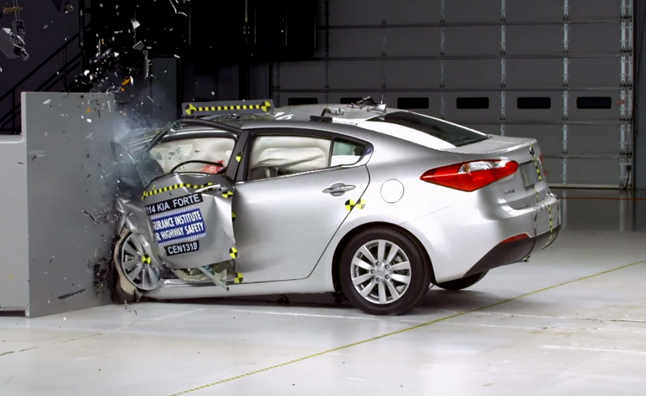 Of 12 cars evaluated in the latest round of crash tests, which include the “New Small Overlap Crash Tests” only the Civic (both coupe and sedan) earned a rating of “good” in the test.

An additional four cars: the Dodge Dart, Hyundai Elantra, Ford Focus and Scion tC earned an “acceptable” rating, which when combined with their other crash tests results is enough to also give them a Top Safety Pick+ award.

In total, just 25 cars on the market have received the Top Safety Pick+ rating since it was introduced last year. The + rating includes the small overlap test shows what happens when the front corner of a car strikes another vehicle or a pole at a speed of 40 mph.

The Sentra suffered from significant occupant area intrusion during the crash while the Forte suffered from both structural issues and poorly functioning restraint systems. As a result of excessive slack in the seat belt, the dummy in the Forte hit the windshield pillar and instrument panel.

“The small cars with marginal or poor ratings had some of the same structural and restraint system issues as other models we’ve tested,” says David Zuby, the Institute’s chief research officer. “In the worst cases safety cages collapsed, driver airbags moved sideways with unstable steering columns and the dummy’s head hit the instrument panel. Side curtain airbags didn’t deploy or didn’t provide enough forward coverage to make a difference. All of this adds up to marginal or poor protection in a small overlap crash.”