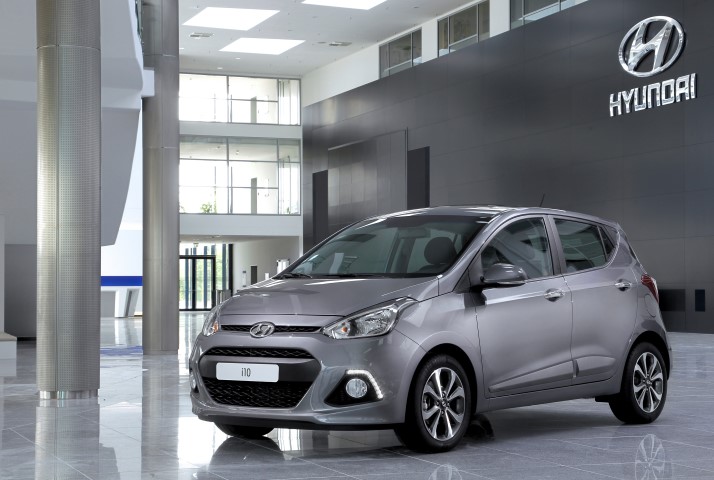 Hyundai Motor is set to build on its success achieved in the A-segment with the New Generation i10, a model designed, engineered and manufactured in Europe, for European buyers.

[ads id=”0″ style=”float:left;padding:5px;”]The new model both enhances Hyundai Motor’s ‘made-for-Europe‘ product line-up and introduces new standards to the region’s A-segment, bringing class-leading space, levels of comfort and safety from the segment above, and sophisticated exterior and interior design. As well as sales, Original i10 won numerous awards across Europe, most recently being named ‘Best city car less than £9000’ at the What Car? Car of the Year 2013 awards (UK), and generated loyalty rates above the segment average – 54% in the five biggest European markets compared to the segment average of 48%.

Another evolution over Original i10 is the introduction of what Hyundai Motor calls ‘true value’ – the addition of desirable features from segments above and emotional qualities such as dynamic styling to existing rational features such as high quality and high efficiency.  Exemplified by models such as New Generation i30 and New ix35, true value is now integral to the appeal of New Generation i10.

“We’re offering consumers something truly unique in New Generation i10 – an A-segment car consumers want to buy, not one they feel they have to. It fully meets the rational needs of buyers in the cost-sensitive A-segment, yet delivers levels of comfort, driving pleasure and perceived quality from segments above,” said Mark Hall, Vice President of Marketing, Hyundai Motor Europe.

New Generation i10 is another example of Hyundai Motor’s commitment to European customers.  It has been designed and engineered at the Hyundai Motor Europe Technical Centre (HME TC) in Rüsselsheim, Germany, and is, for the first time, manufactured in the region, at the company’s recently-expanded plant in Ízmit, Turkey.

[ads id=”0″ style=”float:left;padding:5px;”]Influenced by Hyundai Motor’s design philosophy, fluidic sculpture, New Generation i10 features sleek and substantial lines that emphasise the naturally athletic stance of a model which is longer, wider and lower than its predecessor. The new proportions are mirrored by a driving experience that has been developed to meet European preferences.  Relocated and retuned components result in greater body and wheel control, delivering more driver involvement and ride comfort comparable to that of cars from higher segments.

The larger bodyshell of New Generation i10 yields one of the roomiest occupant cabins on the market, as well as a best-in-class 252 litres of trunk capacity.  Up to 1046 litres becomes available when the rear seats are folded – also a best-in-class figure.  New levels of craftsmanship can be found in the spacious interior, together with levels of comfort and safety equipment commonly only found in segments above.

Allan Rushforth, Senior Vice President and Chief Operating Officer at Hyundai Motor Europe, commented: “The introduction of New Generation i10 represents a pivotal moment for Hyundai Motor in Europe and for the A-segment in the region.  Rich in features and abilities normally only found in vehicles from segments above, New Generation i10 offers consumers premium equipment and abilities –without asking them to pay a premium price.  In addition, consumers benefit from more practicality and space, as well as style and comfort; we’re confident New Generation i10 will win new customers while retaining the many new customers won by Original i10.”

Demonstrating Hyundai Motor’s confidence in its European build quality, the New Generation i10 will come with the company’s Five Year Unlimited Mileage Warranty.  The industry-best package also includes five years of roadside assistance and five years of vehicle health checks – which are offered across Europe for the first time on an A-segment Hyundai model.