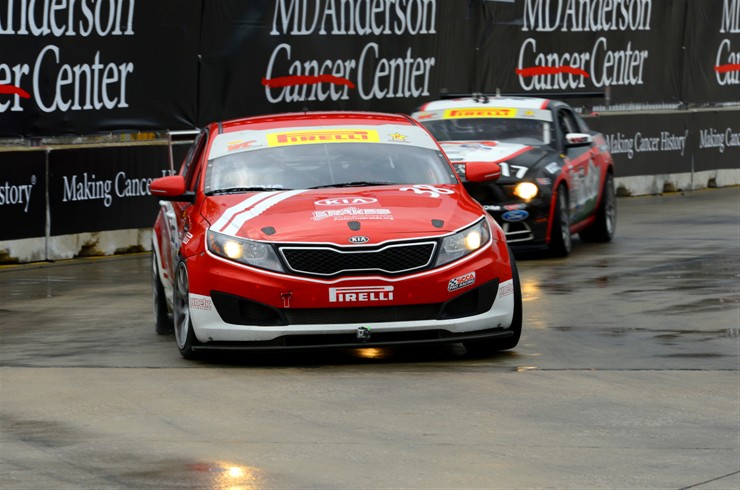 The 2013 Pirelli World Challenge season finale was a three-way, sudden-death shootout for the Grand Touring Sports (GTS) class driver championship, with only Kia Racing’sMark Wilkins, Camaro driver Lawson Aschenbach and Porsche driver Jack Baldwin remaining with a shot at the title. Instead of a high-noon, frontier-town duel, the setting for this showdown was a tight and rain-soaked 1.7-mile street circuit near Reliant Park in Houston. And when the brake dust settled, Wilkins emerged third, securing second place for Kia in the manufacturer championship.

[ads id=”1″ style=”float:left;padding:15px;”]Entering the race ranked third and trailing leader Baldwin by 47 points, Wilkins needed to finish on the top step of the podium for a chance at the championship. Even then, he could only clinch the title if his two closest rivals finished a few places behind. The situation was made even more complicated when a last-minute decision by race officials to modify the track for safety reasons forced the cancellation of qualifying. Drivers would grid for the start according to their position in points, and the race would begin under a full-course caution to allow the field to acclimate to the treacherously wet track.

“We just had to be smooth and get the most out of the car in difficult circumstances. We struggled a bit in the wet, but the Optima Turbo absolutely came alive as the track dried out,” said Wilkins, who set the fastest lap of the race in GTS with a time of 1:21.338. 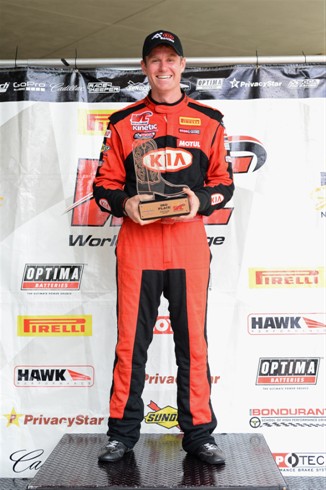 “I really have to thank Kia Motors America, its team members, Kinetic Motorsports and everyone involved in the Kia Racing program for this great opportunity. It’s an honor to drive the No. 38 Optima for this team. We have made huge strides in just two years, and I cannot wait to see where 2014 takes us.”

Teammate Nic Jönsson, driver of the No. 36 DonorsChoose.org Optima turbo, finished the race in 12th place, ending the challenging season 10th in the driver championship. Jönsson set the second-fastest race lap of the weekend (1:22.238) behind his teammate, but an electrical issue slowed his pace and kept him out of contention.

“Racing demonstrates the power, performance and reliability of Kia vehicles, and on-track success – especially among such world-class competition – adds to the allure of the Kia brand,” said Michael Sprague, executive vice president of marketing and communications, KMA. “We are very proud of Mark and the entire Kia Racing team and grateful for their hard work and dedication. We look forward to even greater success together in 2014 and beyond.”

Televised coverage of Round 14 of the Pirelli World Challenge at Houston will air on Sunday, October 20 at 4 p.m. ET on the NBC Sports Network. Race fans can always tune in online for live race coverage at www.world-challengetv.com and catch the latest news and updates from the track at http://www.facebook.com/kiaracing. Follow the team on Twitter at @KiaRacing.