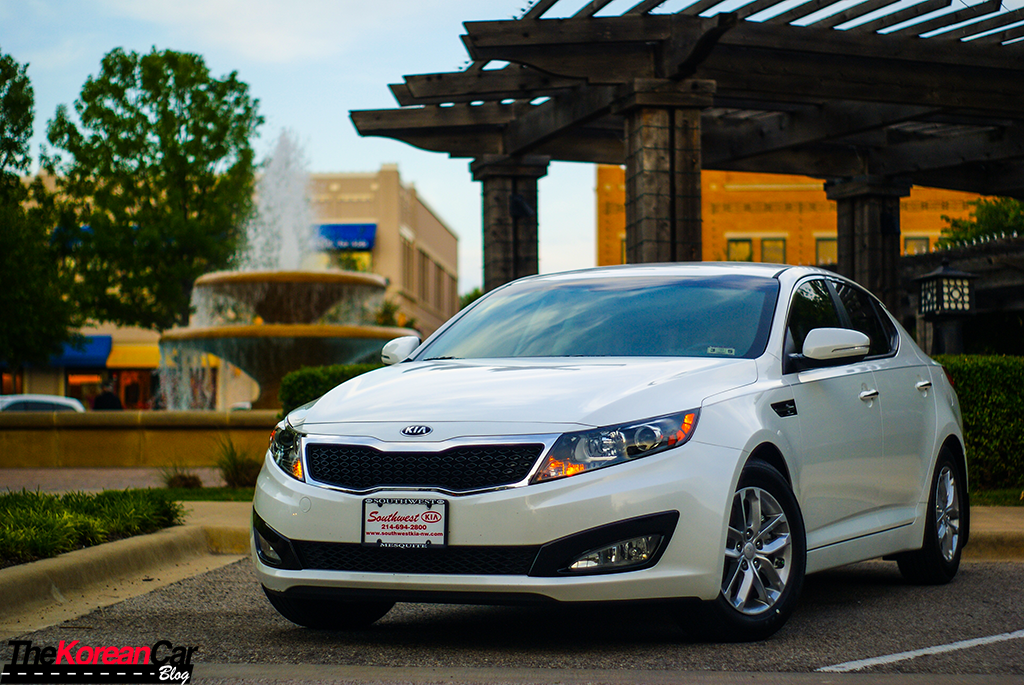 Honestly, it was not easy to make a review of the car I call Kia’s revolutionary car, the Optima. Debuted at the 2010 New York Motor Show, we had many opportunities to test drive but it didn’t work, Erick was lucky to test drive and make a great photo report, but then his SD card got corrupted and lost all the photoshot.

After that, I worked for Kia’s Local Dealer and I had the opportunity to test drive around 400 km (european version with 1.7 diesel engine). It was awesome, but my job left me no time to do a photoshot. (In Europe, particularity in Spain the Optima is difficult to see one). Finally and thanks to our friend Ozzie that bought one, the 2013 2.4 GDi 201 hp EX version, we’ve had the chance to make a good test drive and take some good pictures!. Kia please I hope you read this article and give us more opportunities to test drive latest Kia models.

In the past, Korean cars were seen as dowdy, perceived as unimaginative and subject to the more than odd derogatory comment in passing, then surely whatever is transpiring before our eyes is, quite simply, nothing short of a revelation. Revolution, even. Granted, it has certainly taken time for things to kick in, but you only have to look at the past two years and see how rapid things are coming on line, where the slew of offerings coming about have, one after another, sought to not just placate, but accomplish something far more radical – how about excite for a suitable adjective? 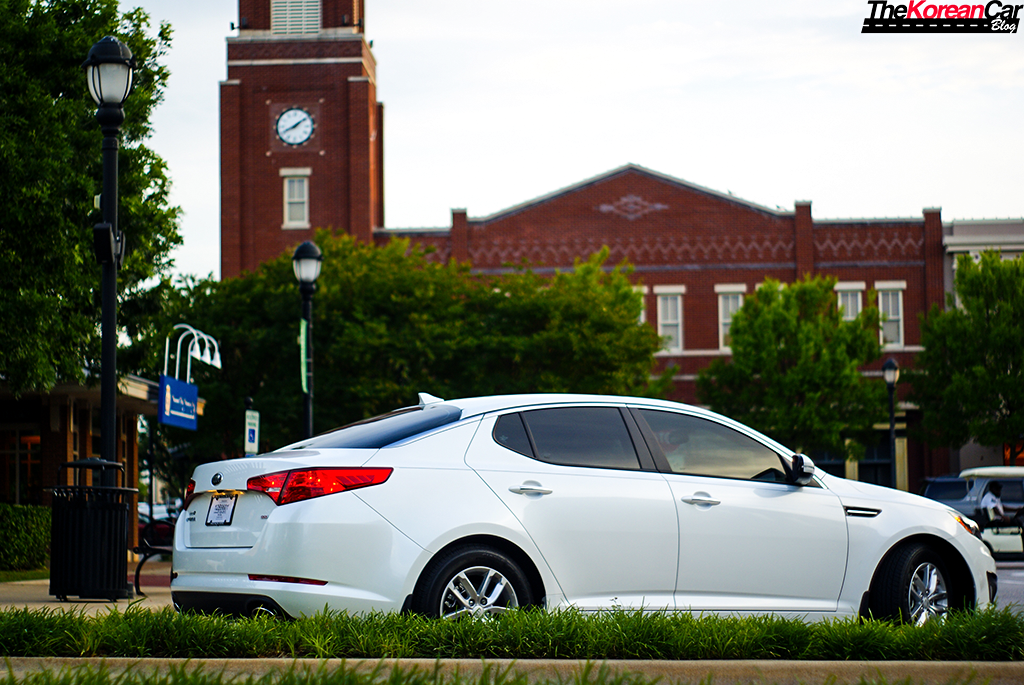 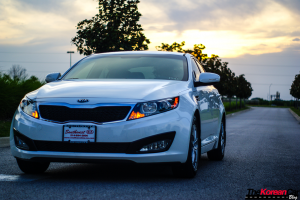 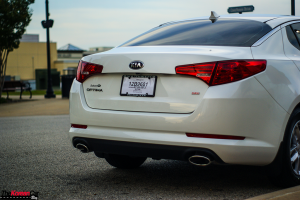 The likes of the new Sorento, Sportage and Optima – all displaying the new design language set about by Peter Schreyer – are the next wave, set to capitalise on this little foothold on the beach. It is with the Optima that our story unfolds here, and what a neat little tale it has turned out to be indeed. It certainly wasn’t like that in the beginning, a decade ago. The original Optima, essentially a rebadged Hyundai Sonata, could hardly be called exciting; as a Jag rip-off, it wasn’t too bad, but on the whole felt like a bit like soggy toast.

The next one that came along, the second-generation, which arrived five years later, proved a far better proposition, and after its mid-life facelift, where Schreyer gave the car a new face, it even started to look like it was getting serious about things. In truth, the Optima was a proper car, proper being that it drove fairly well and displayed all the necessary and appropriate manners for a sedan. In all, the vehicle was hardly a poor offering, but it wasn’t eye-catchingly good, and it never had quite enough panache to catch consumers’ attention. 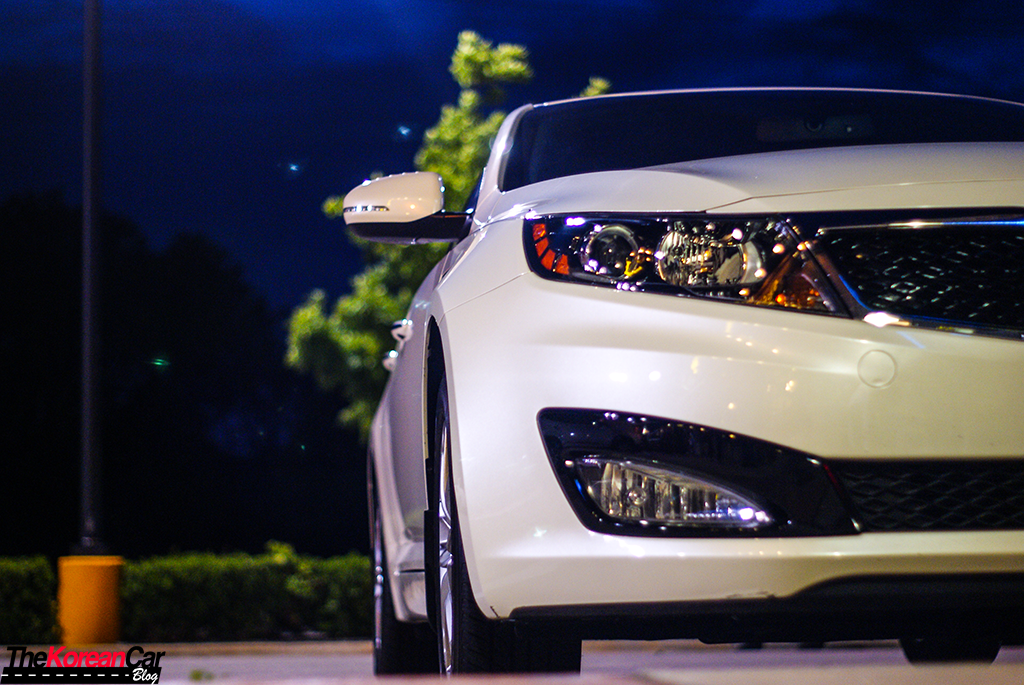 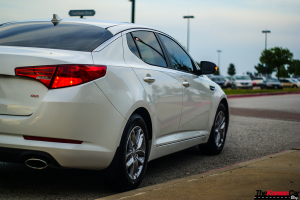 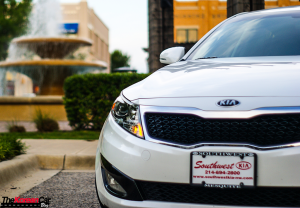 Third time should be the charm. Designed from a clean slate at Kia’s studios in Frankfurt, Germany and Irvine, California, Schreyer and his team have come up with what really is a stunning looking car in their interpretation of the TF, which is longer, wider and lower than the one it has replaced. The 2013 Kia Optima sedan is one of the sportiest, most stylish mid-size sedans out there. We’d even put it up against the styling of some $40,000 European luxury brands. If the new Sonata is all about verve, and fluidly so, then the Optima plays a suitable counterfoil, its muscularity and boldness simply fetching. The grand thing is that it’s never once shouty.

Yes, you’ll find hints of the familiar – the rear lamp assy of the A4, the front shoulder of the E60 5er and a rather Saab-ish rear upper deck, but the entire amalgamation of lines hangs together so organically the profile just works.It looks simplistic upon initial glance, all that contouring, but you have to admire the complete manner in which the lines are so fully resolved on this one, and it takes a moment beyond the first few glimpses to realise that – witness the sculpturing from the C-pillar back on to the tail and you’ll get an idea of how the complex seems simple.

It’s quite the achievement, really, and this is a shape that will arguably have better appeal retention over a long haul than something which is dramatic and full of flourish. Schreyer says that this car looks better each time you clap eyes on it, and I’d have to say he’s spot on that dot. The 2.4 litre gasoline direct injection block offers 198 hp at 6,300 rpm and a maximum torque of 250 Nm at 4,250 rpm (an extra 20hp and 21Nm over what’s on the MPi 2.4 litre block), working with a six-speed automatic transmission. 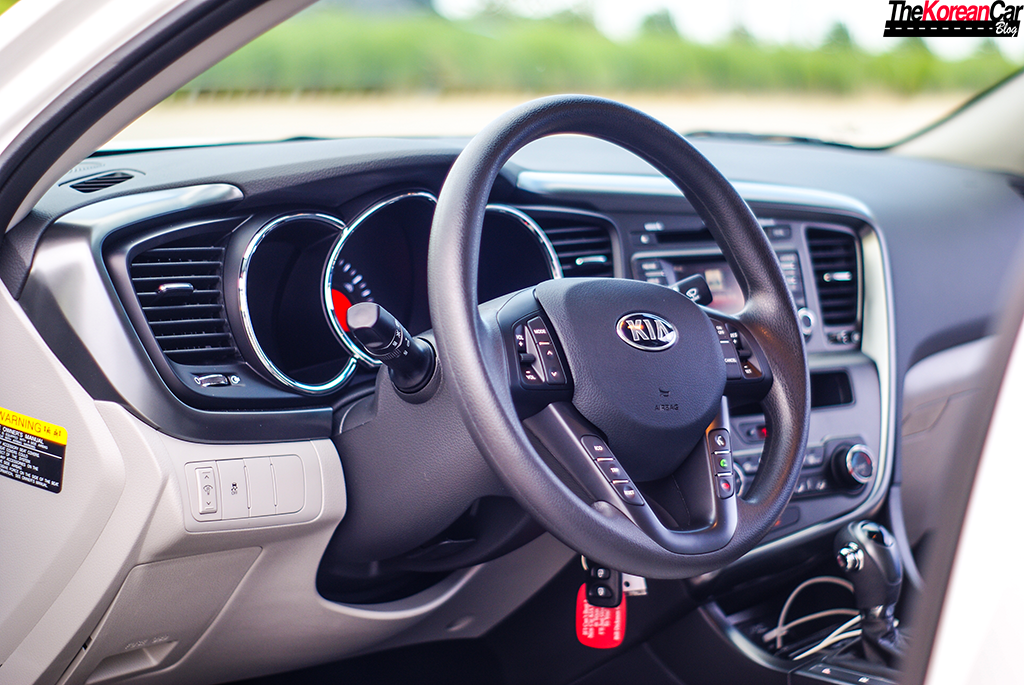 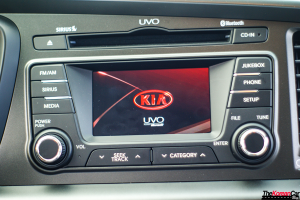 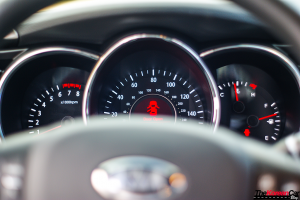 An Active ECO system button reoptimises the ECU and transmission control unit as well as the AC’s compressor to offer better fuel economy – the company claims up to 9% improvement can be had. Performance specs include a 0-100kph time of 9.0 seconds, and a 210 kph top speed. Equally as smooth and quiet as the 2.4-liter engine, the 2.0 Turbo pumps out 274 horsepower, but is mated to the same 6-speed Sportmatic manually-shifting automatic transmission.

[ads id=”0″ style=”float:left;padding:1px;”]The 2013 Kia Optima sedan doesn’t offer the option of a V6, and why should it? The standard 2.4-liter Theta II 4-cylinder is nearly as powerful as some V6 engines and gets far better fuel economy. In fact, it has more power and better fuel economy than many other 4-cylinder cars in the category, as well. Those wanting more power can opt for the T-GDi 2.0 liter (SX trims only). Only one transmission is offered: A 6-speed Sportronic automatic with manual-shift mode. The Optima Hybrid uses the 2.4-liter engine mated to a 40-horsepower electric motor for a combined output of 206 horsepower.

The Optima responds to thug-like behaviour quite splendidly. It’s not an all-out bruiser in this regard, for sure, but the front/rear unity is solid, and the car tracks cleanly when pushed, never wavering or hesitant in the middle of things, with no fuss in the follow through. Nicely integrated, and very well sorted, there is everything to suggest that it is now the definitive form in handling (with this particular tune level), easily more than a measure for the Honda Accord, which has been the class-leading performer in that area for the segment over here.

The famous automotive leader Bob Lutz once said it costs as much to build an ugly car as it does a beautiful one. In the 2013 Kia Optima sedan, Mr. Lutz’s words have been proven spot on. Costing no more than a comparably-equipped Toyota Camry or Honda Accord, the Optima for 2013 outshines its competition with stunning good looks, compact car-like fuel economy, a great warranty and ever-improving resale figures. Add to the mix a panoramic sunroof and heated and cooling seats, and the Optima might appear to be the bargain of the century. Models range from the well-equipped entry LX to the luxurious EX to the fuel-efficient Hybrid. There’s even a high-performance turbo model that will shame some premium brands costing tens of thousands more. 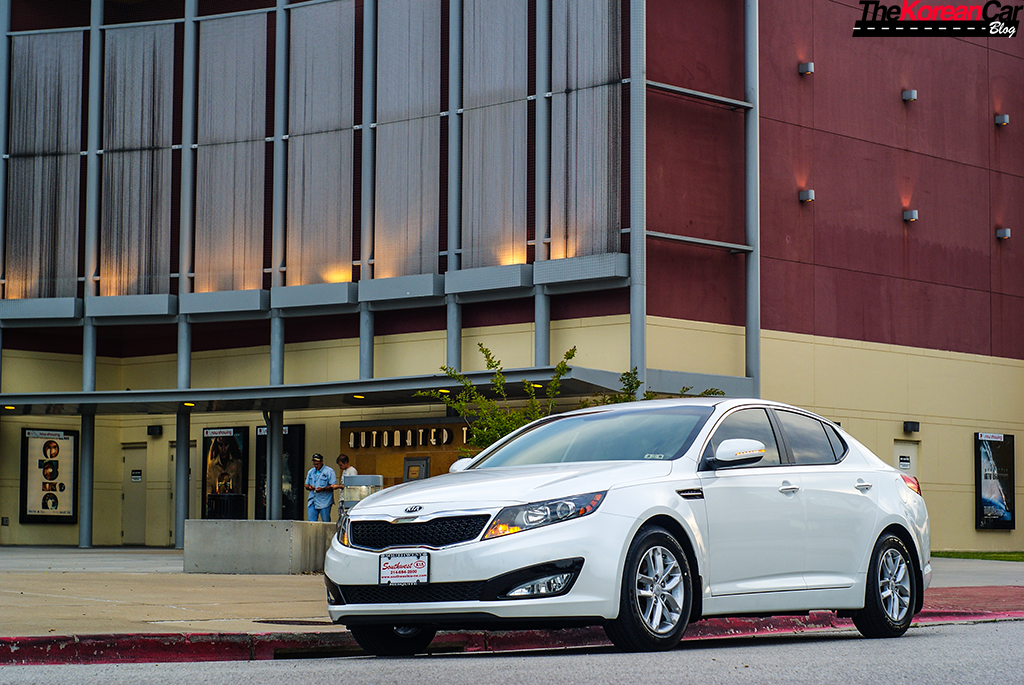 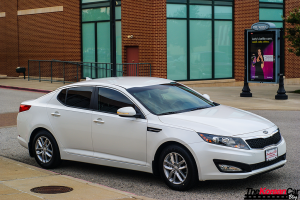 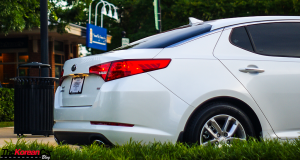 If you’re looking for a fuel-efficient family sedan that isn’t easily lost in a crowded parking lot, the 2013 Kia Optima is it. Combining stunning styling with an affordable price and an unbeatable warranty, the 2013 Kia Optima goes beyond the basic family sedan in features, performance and resale value. The 2013 Kia Optima’s styling may be a bit too over-the-top for some, and its sloping rear roof severely cuts into rear-seat headroom. Also, some of the Optima’s interior plastics still look and feel a bit hard.

[ads id=”1″ style=”float:left;padding:1px;”]For 2013, Kia has added a Limited model to the SX trim than includes Nappa leather seating, LED daytime running lights, red brake calipers and 18-inch chrome wheels. The manual transmission on the LX trim has been dropped, as has the turbo version of the EX. After just a short time behind the wheel of the 2013 Kia Optima, we came away impressed, both by the car’s driving dynamics and its 2.4-liter 4-cyinder engine. Confident cornering aided by nicely-weighted steering encouraged us to push the Optima sedan hard, and the electronic traction and stability controls always intervened when we pushed a bit too hard.

On upper-end EX and SX trims, customers can opt for such extravagant features as a dual-panel moonroof, heated and cooling front seats, heated rear seats and a voice-activated navigation and infotainment system similar to Ford’s SYNC. While we love the look of the 2013 Kia Optima sedan’s interior, some of the plastic on the dash and steering wheel still lack the quality look and feel found in Honda, Mazda and even some GM and Ford products. The front seats are pretty comfortable for tall folks, but the Optima’s sharply-raked rear roofline may cause some headroom issues for the rear-seat passengers.

Looking a bit like something from the sci-fi movie Tron, the Kia’s 2013 Optima is a bold and original piece of work from the ground up. From its cross-hatch front grille and long sweptback headlight housing, to the weather-vane-style wheels on the SX trim, the Optima looks likes it’s going fast even when it’s parked. There is a duality about the Optima sedan for 2013, speaking to both luxury and performance all while masking its true nature to serve duty as a humble family sedan. Even base trims offer such nice features as heated side mirrors, chrome door-handle inserts and 16-inch wheels. 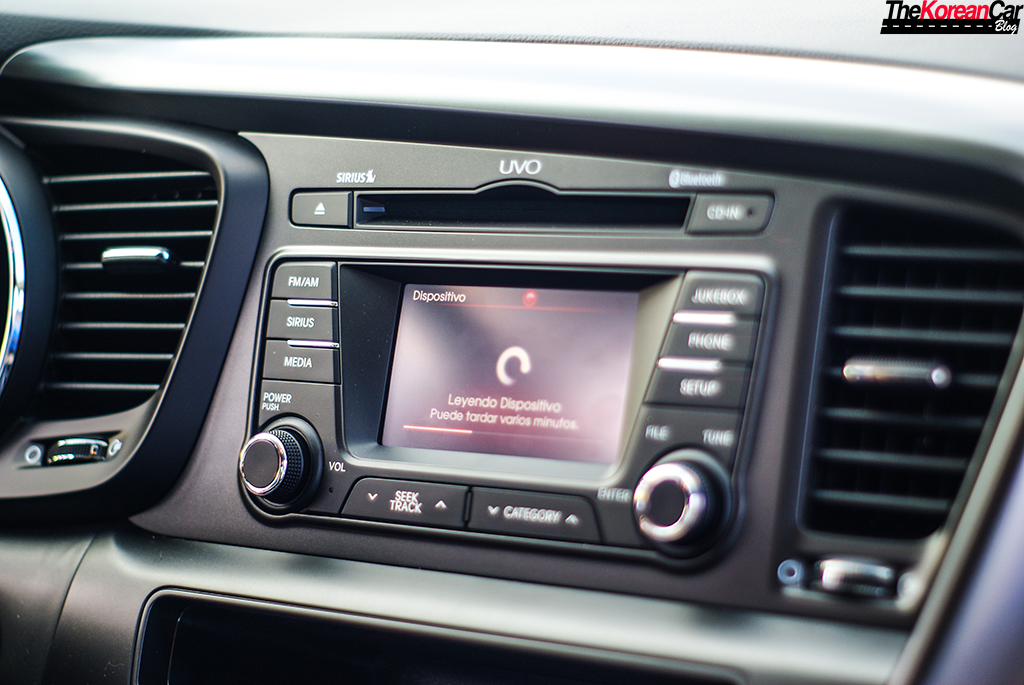 Every 2013 Kia Optima family sedan offers Bluetooth phone connectivity, iPod/USB audio connectivity, steering-wheel-mounted audio controls and a cooling glove box that keeps drinks chilled. As for safety, the Optima has an impressive array of features including six airbags and electronic stability control. Like other base-priced models in its class, the entry-level Optima includes 16-inch steel wheels and a 6-speed automatic transmission. 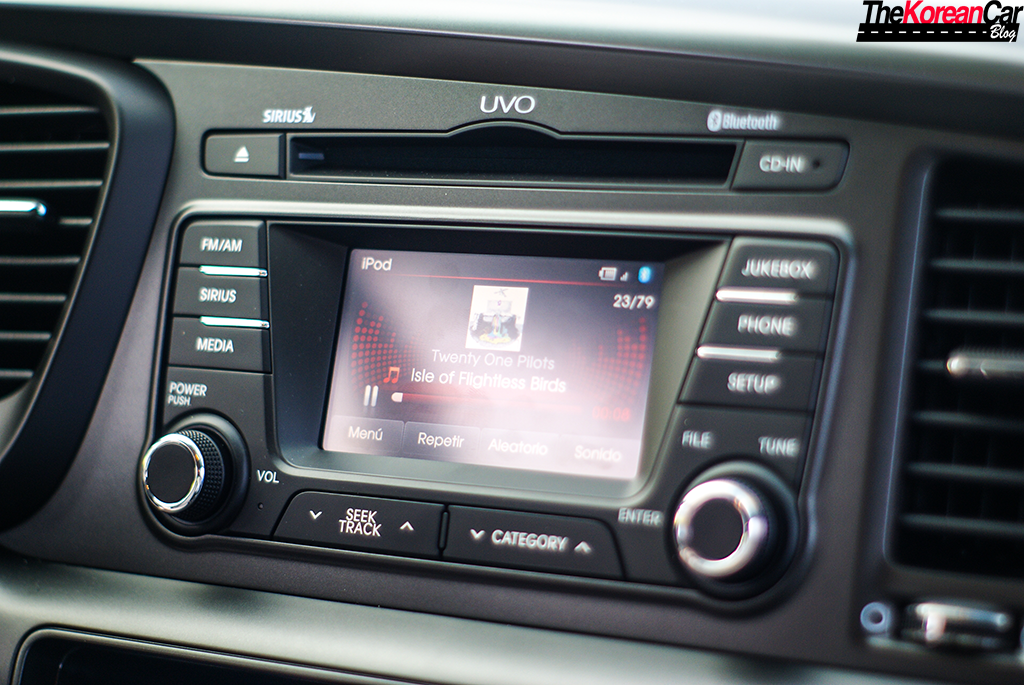 The 2013 Kia Optima sedan starts at a Manufacturer’s Suggested Retail Price (MSRP) of under $21,350 and stretches past $35,000 of the SX Limited Edition. The 2013 Kia Optima Hybrid starts around $25,900. Feature for feature, the 2013 Kia Optima sedan offers more for the money than the Honda Accord, Toyota Camry and Ford Fusion. Before heading to your local Kia dealer, be sure and check our Fair Purchase Price to see what the 2013 Optima is selling for in your area. As for resale value, we expect the newly- redesigned Optima to hold its value better than the Ford Focus, Dodge Avenger and Chevy Malibu, and to be only a few percentage points shy of the segment-leading Honda Accord and Toyota Camry.

We hope that we will have the opportunity to test soon the 2014 Optima.