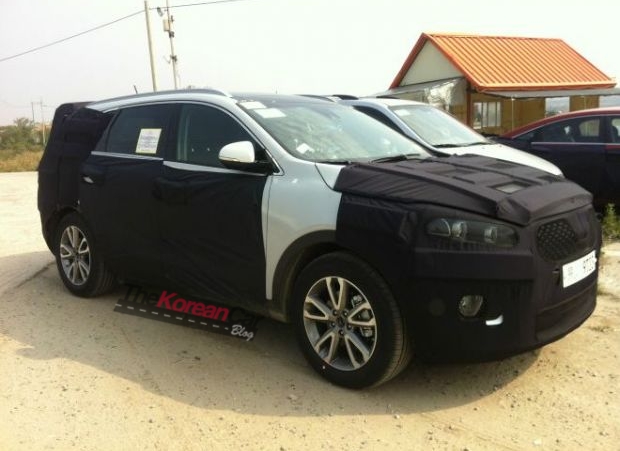 The 2014 Kia Sorento SUV received a big updated for the new model year, but if you look at it, changes are not pretty much than front and rear facelift and a revised interior. That’s why Kia is now working in the next generation Sorento that will be arrive at the United States as a 2015 model year.

[ads id=”1″ style=”float:left;padding:1px;”]From the side, it looks like the 2015 model will get a more upright grille similar to the recently introduced Cadenza premium sedan, compared with the more back-swept style on the current Sorento. Although retaining Kia’s trademark “tiger nose” grille, the grille on the 2015 mule appears to have a gently arching upper edge, as well as cutting a little deeper into the front fascia.

Details are extremely limited at the moment but we expect more power from the 2.4-liter GDi and V6 3.3-liter GDi engines, along with a Hybrid version which could be available from day one. Although difficult to say with certainty, it appears the 2015 model may be adopting the longer wheelbase of the three-row Hyundai Santa Fe.

It’s unknown if the Sorento will be offered in two sizes, such as the Hyundai Santa Fe and Santa Fe Sport or if there will be one size for future Sorento models.

← Prev: Hyundai To Debut New Genesis Sedan in Europe Next Year Kia Shows The First Official Picture of the 2014 K900 →