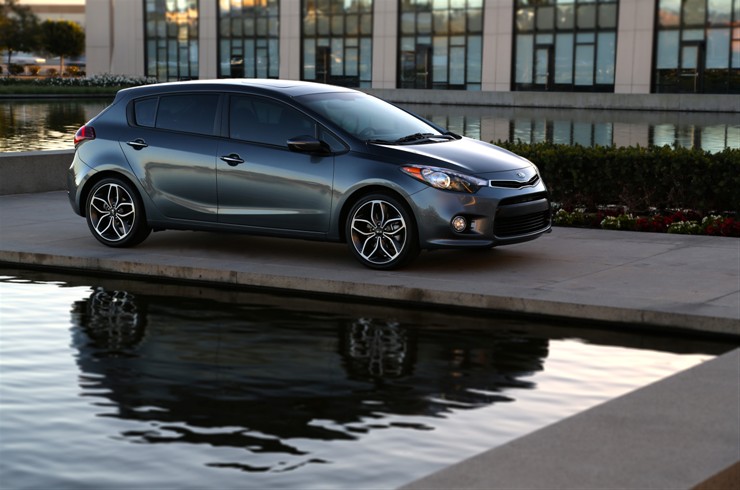 Las Vegas veterans know when it’s time to up the stakes and parlay a strong hand into a big win, which is exactly what Kia Motors America (KMA) is doing with its second-generation Forte5 hatchback.

Originally unveiled at the 2013 Chicago Auto Show earlier this year, the Forte5 SX’s eye-catching European-inspired hatchback design is complemented by a powerful 1.6-liter gasoline direct-injected (T-GDi) turbocharged four-cylinder engine putting out 201 horsepower and 195 lb.-ft. of torque, making the Forte5 SX and the all-new Forte Koup SX a high-performance pair worth betting on. The Forte5 is expected to go on sale in the fourth quarter of 2013, and pricing will be announced closer to launch.

Like its two-door Koup cousin, the Forte5 is offered in two trim levels, EX and SX, with two distinct engine choices. In typical Kia fashion, the Forte5 surprises customers with a long list of premium amenities and features not normally found in the compact segment. Under the hood, the Forte5 packs a punch, with the EX’s 2.0-liter GDi four-cylinder engine putting out a healthy 173 horsepower and 154 lb.-ft. of torque through a 6-speed automatic transmission. The performance-oriented SX comes standard with the hard-charging 1.6-liter turbo four-cylinder, a first for the Forte line. The SX also offers buyers the chance to pick their own gears with a standard 6-speed manual transmission, or they may opt for the available 6-speed automatic featuring steering-wheel-mounted paddle shifters.

Conceived under the watchful eye of Kia’s global chief of design Peter Schreyer, the Forte5’s sophisticated hatchback profile, large wheels and aggressive posture give it a distinctly European appearance that speaks to its performance intentions. The chiseled body commands attention and continues Kia’s tradition as a design leader in the industry.

Like its Forte sedan counterpart, the Forte5’s swept headlights stretch deep into the front fenders and the raked windshield and broad shoulders give the front end a sleek, sporty appearance. LED positioning lights add a premium look to the front fascia. Moving around the vehicle, the large 18-inch wheels fill the wheel wells on the SX, and the hatchback profile affords a performance-oriented European personality. At the back, the rear hatch glass opens to reveal 23.2 cubic feet of usable cargo space. LED tail lights complete the premium feel of the exterior and a sporty rear valance with twin chrome exhaust tips maintains the Forte5’s edgy demeanor.

Inside, the Kia Forte5 features premium materials and soft touch points. Large, easy-to-read, white-on-black gauges nestle deeply into the instrument cluster. Chrome accents around the HVAC controls and optional push-button start, along with carbon fiber-textured materials on the dash and seats, add a sporty touch. A grippy leather-wrapped steering wheel and shift knob are further evidence of the Forte5’s performance aspirations. Class-exclusive available features such as front and rear heated outboard seats, a ventilated driver’s seat and driver-selectable electric steering further set the Forte5 apart from its competition.

The Forte5 SX is the most powerful Forte built by Kia to date, utilizing a 1.6-liter GDi turbocharged four-cylinder engine. Power is seamlessly transferred to the front wheels via a six-speed manual or available automatic transmission. The GDi powerplant produces 201 horsepower at 6,000 rpm and 195 lb.-ft. of torque between 1,750-4,500 rpm. The advanced powertrain features double overhead cams with dual continuously variable valve timing to help improve efficiency and performance.

To help further improve performance, the Forte5 features a sport-tuned suspension with a McPherson strut setup in front and a torsion beam rear design. The Forte5 rides on standard 205/55R-16 tires while 225/40R-18 tires are included with the SX trim for an even more sporting driving experience.