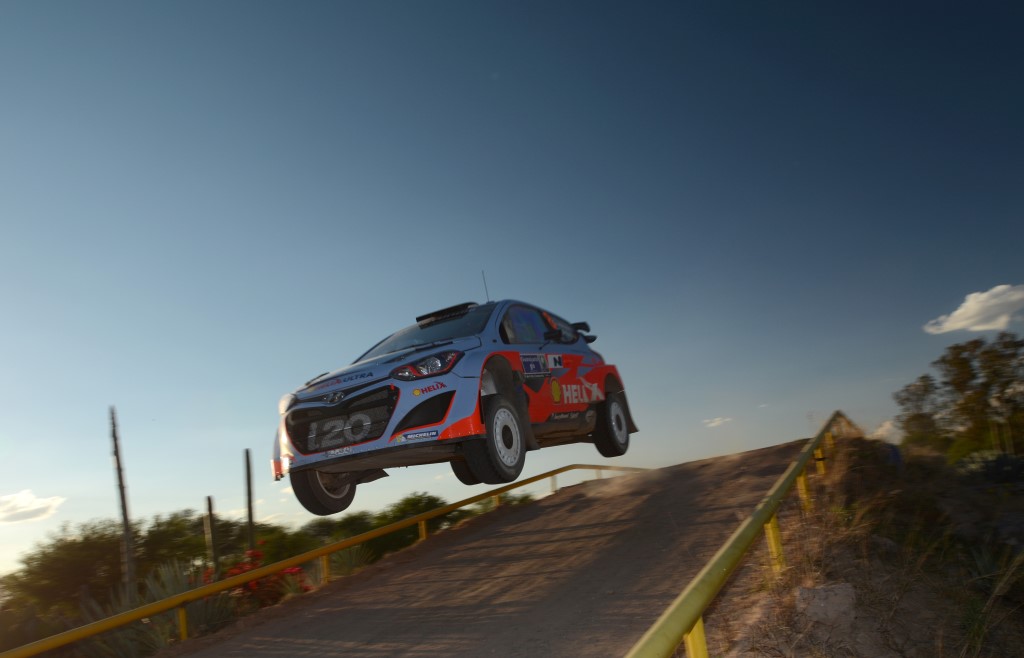 The Hyundai Shell World Rally Team has celebrated a landmark result in Rally Mexico with both Hyundai i20 WRC cars finishing the gruelling 22-stage rally in style and lead driver Thierry Neuville scoring a maiden podium for the team in third place.

[ads id=”0″ style=”float:left;padding:5px;”]The Belgian with his co-driver Nicolas Gilsoul have been on scintillating form this weekend after initially struggling with the gravel terrain and high altitude on the first full day. Neuville put in a string of competitive stage times on Saturday to edge his way into the podium positions by the end of the day before continuing his fine form into today’s final stages to consolidate the result and pick up 15 drivers’ points.

The result wasn’t without its moments of drama, as the #7 Hyundai i20 WRC developed a radiator leak at the conclusion of the final stage. Neuville and Gilsoul were able to fix the leak in the road section and make it safely back to the service park enabling the drivers and the team to celebrate their well-earned podium result.

Neuville said: “We are incredibly happy to have scored this podium result today and especially in a rally as demanding as Mexico. We kept our heads down and focused on delivering the best results we could in each stage without going over the limit. Our objective has always been just to bring the car home and finish the rally, so to take a podium is a really nice bonus for the team, who have worked so hard. Having the first-hand experience of rally competition is so valuable for the team and the data we have gathered this weekend will be extremely useful in further development of the Hyundai i20 WRC and the team overall. We are delighted with this result and to have exceeded our targets. It’s been a real team effort and I’m proud of what we’ve achieved, even if there is much more to come.”

[ads id=”0″ style=”float:left;padding:5px;”]For Chris Atkinson, Rally Mexico has been his first competitive WRC event for over a year and his first as a driver for the Hyundai Shell World Rally Team. The Aussie met and exceeded the team’s expectations of him by also bringing his Hyundai i20 WRC car to the end of the rally in a highly commendable seventh place overall, picking up six championship points.

Atkinson and his co-driver Stéphane Prévot had to overcome some technical issues on the opening day but still registered a top ten position heading into Saturday’s stages. The pairing continued to fight hard despite encountering some demanding conditions through the Mexican gravel terrain as one of the first drivers to contest each stage. They achieved the target of completing the rally and ensuring that Hyundai Shell World Rally Team, in just its third WRC event, brought both cars to the finish for the first time.

Atkinson said: “It’s not been an easy weekend but what a way to end it for the team to celebrate a two-car finish and our debut podium. Mexico is a tough rally and I have had to deal with a few issues during the event. We had a suspension problem on Friday which put us down the order and then we had to run early in the subsequent stages which meant a lot of slippery conditions. We had to play things sensibly and drive cautiously to achieve our objective of finishing the event, which I am pleased we did comfortably. We made some improvements during the rally and I’m pretty satisfied with seventh overall and more importantly to finish. This experience will be really useful for the team to improve the car for the rest of the year. I look forward to returning to the cockpit of the Hyundai i20 WRC later in the season and thank the team for all their support this weekend. Everyone deserves the podium result today.” 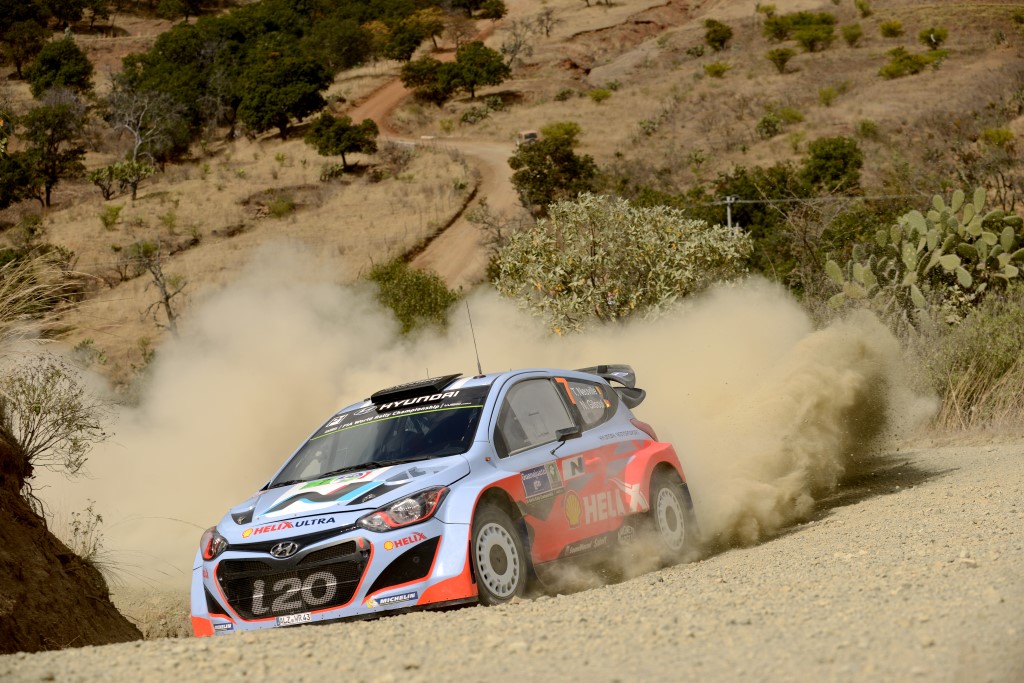 Rally Mexico has been the toughest test so far for the Hyundai Shell World Rally Team with some of the longest, arduous stages and physical demands on the team with the high altitude in Mexico. The result marks the first time that both Hyundai i20 WRC cars complete a rally event fully but to do so with a podium result far exceeds the team’s objectives and adds 23 championship points to its 2014 rally.

[ads id=”0″ style=”float:left;padding:5px;”]Hyundai Motorsport was only established 15 months ago so the WRC programme is still in development with plenty more for the team still to learn in the remaining rallies of the year. The team has focussed on gaining experience and information from each event with the target of a two car finish still very realistic aims.

Team Principal Michel Nandan said: “Our team is still very young so this result is hugely significant for us. Not only have we finished one of the toughest rallies with both cars, but we have also scored a debut podium in the process. It’s fantastic. We are learning all the time and we are pushing hard both on event and back at our factory in Alzenau. The WRC programme is a big challenge and one upon which we embarked with a very short time scale. This result today is a huge reward for a lot of hard work and determination, so thanks must go to the entire team in Alzenau and also to our colleagues in the Namyang R&D centre in Korea. We are building a great team of people and we are going to celebrate this together before getting straight back to work, preparing for Portugal. Our learning curve continues despite this good result.”

Overall Classification after Day One