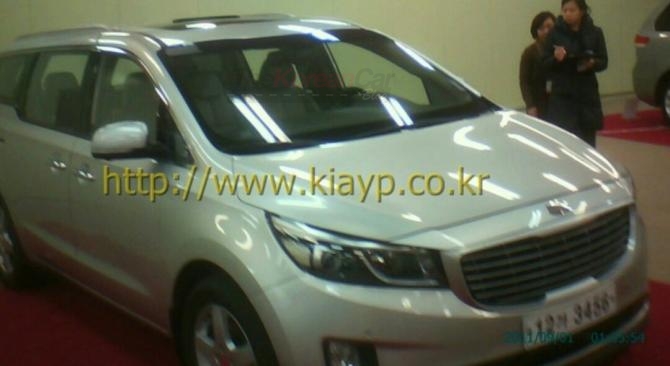 After Kia launch the second teaser of the all-new Kia Sedona revealing the side view in a new render, that will debut in April 18, at the 2014 New York Autoshow. Today we have a completely undiguised pictures of a 2015 Sedona base trim.


Now we have the opportunity to take a look to Kia’s new design identinty with a big chromed grille featuring the “tiger-nose” and very similar to the K9 2014 launched in South Korea recently (you can see a picture below). The 2015 Sedona will come with powered rear sliding doors. Kia says its new minivan will be able to seat up to eight passengers, while “also serving as a purposeful offering for adventure seekers.”

The redesigned Sedona is expected to have a roomy interior with additional cargo and passenger space, plus new rear seats infotainment systems. We can also expect high-tech options including an infotainment system (you can see in the spyshots), a blind spot monitoring (BSM) and lane departure warning system (LDWS), three mode electric adjustable power steering (FlexSteer) or second generation UVO eServices. In addition to an all-new look, the new Carnival promises a refreshed petrol (top of the range will be a 3.3 V6 GDi with 290 hp) and diesel CRDi engines, increased safety and technology.