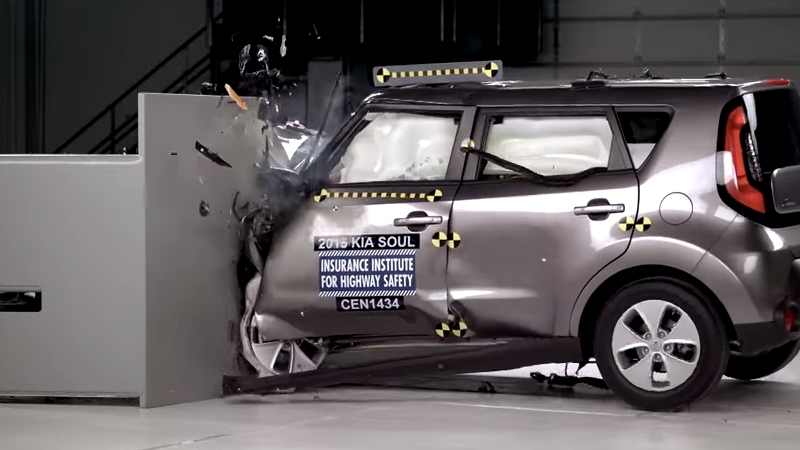 With good ratings in the Institute’s four other crashworthiness evaluations, the Soul qualifies for the IIHS TOP SAFETY PICK award. A second small car from Kia, the Forte, also improved after the manufacturer made changes, but only to a marginal rating.

The 2013 Soul and the 2014 Forte both earned poor ratings in the small overlap test. The Soul was redesigned for the 2014 model year, but the car wasn’t tested then because the company told IIHS it didn’t believe it would perform well. The front end and occupant compartment were strengthened for 2015.

In the test of the 2015 Soul, the driver space was maintained reasonably well with a small amount of intrusion. The dummy’s movement was well controlled, and its head hit the frontal airbag, which stayed in position during the crash.

The side curtain airbag deployed and provided sufficient coverage to protect the head from contact with side structure and outside objects. All measurements recorded on the dummy indicated a low risk of any significant injuries in a crash of this severity.

Like the Soul, the Forte also got significant structural upgrades to the occupant compartment. Compared with the 2014 model, one of the worst performers of any vehicle tested by IIHS for small overlap protection, the 2015 model fared much better, but its overall rating still is only marginal.

Even with the stronger occupant compartment, the driver’s space wasn’t maintained well, with intrusion approaching 8 inches at the lower hinge pillar. The dummy’s head slid off the frontal airbag and struck the instrument panel, as the safety belt allowed too much forward motion. The side airbag also lacked sufficient coverage to protect the head. Nevertheless, injury measures on the dummy were low.

IIHS introduced the small overlap evaluation in 2012. In the test, which is more challenging than either the head-on crashes conducted by the government or the Institute’s moderate overlap test, 25 percent of a vehicle’s front end on the driver side strikes a rigid barrier at 40 mph. The crash replicates what happens when the front corner of a vehicle collides with another vehicle or an object such as a tree or a utility pole.

To qualify for TOP SAFETY PICK, a vehicle must earn a good or acceptable rating for small overlap protection and good ratings in the Institute’s moderate overlap front, side, roof strength and head restraint tests.