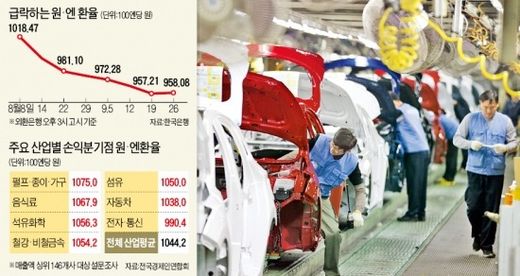 Early last year, Hyundai Motor launched its Sonata SE at the price of US$22,277 in the North American market. The factory price of Toyota’s Camry LE that was rolled out at almost the same time was $22,680, $403 higher than that for the Sonata SE.


But the prices now reversed within only one year’s time. Hyundai Sonata SE’s price is $23,175 while that for the Toyota Camry LE is $22,870. Auto industry analysts said that this is the first time for factory prices to be reversed even though there were instances where Camry prices were lower than those of Hyundai Sonata because of limited-time discount offers.

They expressed concerns as the won-yen exchange rate is forecast to move to the 800-won level per 100 yen next year. For the past two years, the yen value has declined precipitously. On September 26, the yen-dollar exchange rate was closed at 109.25 yen per U.S. dollar, hitting a record-high level in more than six years since August 29, 2008. On the same day the won-yen exchange rate fell to the level of 958.08 won per 100 yen, down 5 percent from 1,008.05 won on July 8.

A weak yen is translated into weakening of price competitiveness in Korean-made goods in the international market. According to a recent study by the Korean International Trade Association, the unit prices of major export items (machinery, electronics, and automobile products) to the European market were 7.1 percent higher for Korean exporters than Japanese counterparts, which analysts said was largely attributable to the weak yen.

Analysts also said, “Not many Korean exporters will be able to withstand if the won-yen exchange rate moved down to the 800-won level.” An official with the Federation of Korean Industries said that Korean corporations competing head on with Japanese rivals in about 100 items will be faced with a crisis if the exchange rate fell to 800 won per 100 yen.