[ads id=”0″ style=”float:left;padding:9px;”]On the 2nd race Jason Wolfe in the Forte Koup took charge in TCA on the opening round of the 2016 Pirelli world challenge. Without missing a beat, the two-time class champion took the lead by overtaking Goulart in the No. 70 Mazda MX-5 Cup car on the start over. In the 3rd Lap, Wolfe aggressively defended his lead position over Goulart, and Senguin in the No 32 Honda Civic Si. By lap 3, other competitors wanted a piece of the action by Drake Kemper in the No 21 Mazda MX-5 taking Senguin’s position and aiming for the top.Although Jason Wolfe, continually and successfully remained in the lead, competitors were fiercely fighting for 2nd and 3rd but Eric Powell in the No. 23 Mazda MX-5 took Kemper’s 3rd place position. During Lap 10 Goulart made an impressive move and took lead from Wolfe however, Wolfe took the lead back which became a door to door battle between the Forte Turbo and Civic Si for several laps.It was the final lap for the 2nd race and Wolfe had the lead, unfortunately there was a mechanical issue which was later diagnosed as possible fuel shortage in the Forte and although Wolfe defended the lead as best he could, Goulart managed to sneak past him on the final turn earning Jason Wolfe 2nd place. 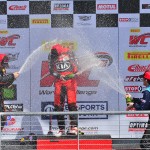 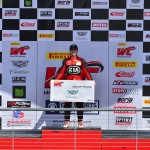 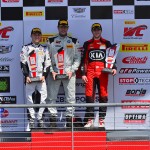 [ads id=”0″ style=”float:left;padding:9px;”]The 3rd race however was up for grabs to anyone willing to push themselves to the limit but remain focused. Powell started the race but slid to fifth position in the standing start giving Wolfe the opportunity to take the lead. During the first laps Powell and Wolfe battled intensely for the lead, each one passing each other at any opportunity in every lap. On lap 9, it became a 3-way battle between Powell, Wolfe, and Goulart. As their cars go 3 wide across the track Wolfe takes the lead earning him the Cadillac ATS-V move of the race award. As time ran out and the final turn in sight, the final lap had turned into a drag race with Wolfe taking the win by as little as a foot ahead of Goulart.During the interview, Wolfe said that they ran into the same fuel issue as last time during the end of the race. However, thanks to adding another half-gallon of fuel, Wolfe was able to hold them off and take the win.

Overall, Kia made another great impression by taking a win and podium position in the beginning of the season. We look forward to seeing Kia in the next race, taking more wins and proving that Korean cars win on the street as well as the track.

Video of the ongoing battle between Jason Wolfe and Elivan Goulart on Round 1, Enjoy!