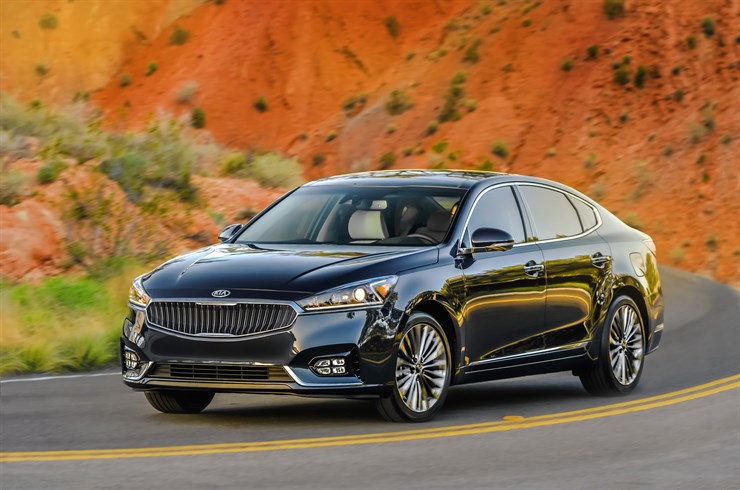 The Big Apple today is playing host to the world debut of the all-new 2017 Kia Cadenza at the New York International Auto Show.

[ads id=”0″ style=”float:left;padding:9px;”]The stunningly beautiful Cadenza improves upon all the elements that made its predecessor an award-winning success, boasting a precisely crafted cabin, cutting edge technology for connectivity and driver assistance, a stronger body structure, and powertrain enhancements for a more premium experience behind the wheel.

“The new Cadenza adds an extra dose of excitement to the large-car segment with its striking, aggressively handsome looks and premium refinements,” said Orth Hedrick, vice president of product planning, Kia Motors America.  “Everything you see and touch in the Cadenza’s cabin has been improved, but it’s underneath where the Cadenza truly shines with a stiffer and lighter chassis, eight-speed transmission and vastly improved driving dynamics.”

The second-generation Cadenza is set to go on-sale in late 2016, and pricing will be announced closer to the vehicle’s launch date. 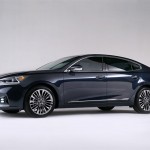 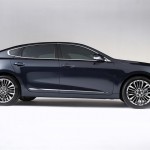 Elegant and Confident Exterior
Designed at Kia’s California design studio, birthplace of the unforgettable Track’ster and GT4 Stinger concepts as well as the iconic Soul, the Cadenza’s precision-machined exterior exudes confidence, with clean lines offset by expressive details.  It all starts with Kia Chief Design Officer Peter Schreyer’s oft-quoted philosophy focusing on “the simplicity of the straight line,” which is defined by a single gestural contour that spans the length of the car, creating a sleek profile.  This lineation visually links matching Z-shaped lighting signatures in the headlights and LED tail lights, affording the all-new Cadenza a more distinctive road presence, day or night.  The overall impression is one of modernity and power, which is achieved by visually shearing away surface area to create a more angular form.

Head on, the Cadenza is more expressive thanks to the newly designed front fascia.  While the signature Kia “tiger nose” grille is still an unmistakable design trait, it has evolved into a new hexagonal shape that emphasizes the Cadenza’s visual width with lines extending underneath the headlights.  But the more substantial change to the grille is its distinct concave form, which curves in toward the engine bay, giving the Cadenza its handsomely chiseled face. 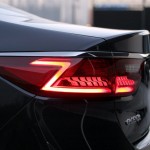 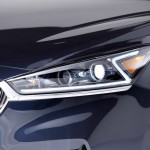 Unlike other cars in the segment, the Cadenza is available with two different grilles. Lower trim models will come with the “Diamond Butterfly” front grille that features the same three-dimensional pattern as several siblings within the Kia lineup, but has its own unique appearance thanks to the concave shape. Higher trim models will come with the “Intaglio” grille, featuring vertically oriented, faceted blades.

LED technology inside the “piano key” taillights helps create visual depth while also complementing the Z-shape lighting signature.  Other thoughtful details include the chrome garnish that extends through the trunk lid, accentuating the Cadenza’s wide stance, and tasteful chrome accents on the side mirrors and rear quarter windows.

Exterior styling is further enhanced by optimized dimensions.  While the new Cadenza has the same overall length as the outgoing model, it’s slightly wider and lower in height.  The wheelbase has been stretched slightly, contributing to nearly a half-inch of increased legroom for rear passengers.  Achieving Cadenza’s sportier profile was achieved by extending the roofline rearward more than two inches, while maintaining rear headroom and slightly improving trunk space.

[ads id=”0″ style=”float:left;padding:9px;”]Exquisitely Comfortable Interior Space
The interior is thoughtfully redesigned with even higher quality materials than the preceding model and higher levels of craftsmanship throughout. Like the exterior, the Cadenza’s soft interior contours are offset by sheared surfaces.  Kia designers visually widened the Cadenza’s interior space with a wraparound dashboard that flows into the door panels and features real stitching.  The door panels themselves have been adorned with higher quality soft-touch materials, while soft leather envelopes the Cadenza’s cabin space. Nappa leather is available with quilted seat bolsters accented by diamond shaped stitching that dresses up the Cadenza’s already attractive cabin.  For 2017, buyers have greater opportunity to customize their Cadenza, as a dark brown interior color has been added, bringing the total number of color combinations to four.  Like the outgoing model, the White Package remains an option, but it has been upgraded with a new black wood-grain-style trim finished with a pearlescent sheen.

Improvements were made throughout to ensure a more pleasant driving experience.  The driver’s seat has been lowered for a sportier and more stable feeling, while engineers extended the seat cushion slightly and developed an innovative cushion extension mechanism that slides and rotates, making it easier for drivers to find their comfort zone behind the wheel.  The heating elements used for the seat warmers have been reengineered to more evenly distribute warmth, and as a Kia first, the seat heaters now utilize a smart control system to automatically lower the heater operating mode after a certain period of time. 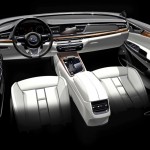 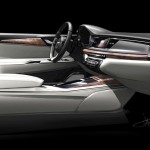 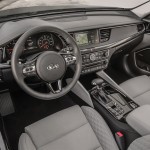 The Driving Experience
The 2017 Cadenza is built upon a strong foundation with a body structure composed of more than 50 percent Advanced High Strength Steel (AHSS) — more than twice the amount used in the outgoing model.  Engineers are targeting an overall five-star rating from the National Highway Traffic and Safety Administration and a Top Safety Pick+ designation from the Insurance Institute for Highway Safety.  A driver’s knee airbag helps in this regard and brings the total number of airbags in the vehicle to nine.

The first Kia to be sold in the U.S. under the DRIVE WISE sub-brand, the Cadenza offers cutting-edge driver assistance features1  such as Advanced Smart Cruise Control with stop-and-go functionality, Forward Collision Warning and Autonomous Emergency Braking, and Lane Departure Warning.  Another Kia first is the Smart Blind Spot Detection System1 which senses unintentional drifting toward an adjacent vehicle and automatically brakes the opposite side front wheel to help maintain the vehicle’s intended course. 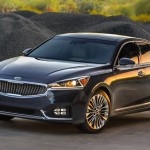 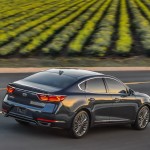 Side body panels are stronger and feature increased tensile strength steel to improve Cadenza’s dent resistance.  Thanks to the increased use of structural adhesive and hot-stamped components, structural stiffness has been increased by more than 35 percent, which also improves driving dynamics.  The overall chassis is lighter, thanks to the use of aluminum instead of steel in areas like the front steering knuckles, and engineers retuned the front and rear subframes with larger bushings to improve lateral stiffness and NVH characteristics.  Further improving the ride are Amplitude Selective Damping (ASD) shock absorbers that maximize ride comfort without sacrificing stability.  An extra valve in the damper provides the appropriate damping force according to the road surface, while the new shock absorber now includes a Hydraulic Rebound Stopper (HRS), which works to provide a smoother ride over harsh or broken surfaces.  The retuned suspension has improved the Cadenza’s lift coefficient (the up-and-down forces exerted on a moving vehicle), and the end result is better high-speed stability and handling.  Steering is more responsive than before with better on-center feel thanks to a new 32-bit Electronic Control Unit (ECU), replacing the 16-bit processor in the outgoing model.

The 2017 Cadenza’s confident ride and handling are complemented by improvements in NVH. Additional acoustic absorbing laminate in the front windows and windshield reduces wind noise, while a full floorpan undercover quells road noise.  Together with increased insulation around the A-pillars, NVH levels have been substantially reduced, resulting in a library-quiet interior.  The floorpan undercover also helps improve the Cadenza’s aerodynamic performance, along with front wheel air curtains that reduce drag around the tires.  Overall, the coefficient of drag has improved from 0.29 to 0.28. 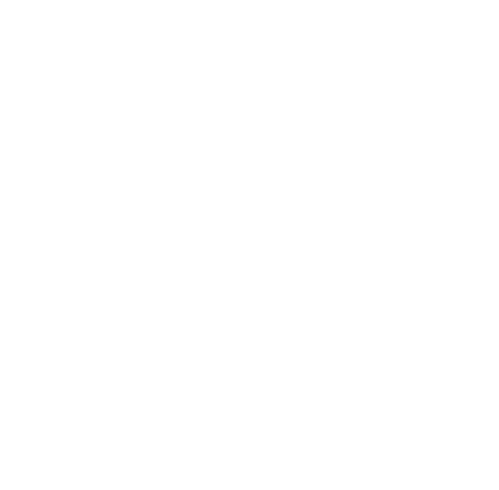 Newly designed 18- or 19-inch alloy wheels may be shod with available Michelin®2 tires (P245/45R18 or P245/40R19).  Behind the wheels, larger brake rotors improve overall braking performance and feel.  The front brakes have been increased from 11 to 12 inches, while the rears have grown marginally from 11 to 11.1 inches, helping to reduce stopping distances.

[ads id=”0″ style=”float:left;padding:9px;”]Harmonious and Modern Cockpit
Brimming with technology, the cockpit is designed to provide a more harmonious human-machine interface with ergonomically intelligent design, intuitive controls, and a suite of enhanced convenience features making the driving experience enjoyable and effortless.  New to the 2017 Cadenza is the Head Up Display (HUD)3, which shows key driver information such as speed and turn-by-turn navigation directions on the windshield directly in the driver’s line of sight.  In addition, the Surround View Monitor1 has been updated with improved software and resolution that gives the driver a clearer birds-eye view of the area around the vehicle, with newly added reverse guidelines offering confidence when backing into confined spaces.  Other features new to the Cadenza include Smart Trunk, which conveniently opens the trunk lid if the sensor detects the key fob for more than three seconds, and a wireless smartphone charger.  The latest generation of Kia’s UVO system featuring Android Auto4 and Apple® CarPlay5 is standard, while a 12-speaker Harman/Kardon® system featuring Clari-Fi™6 music restoration technology is an option.

Efficient and Durable Performance
Underneath the hood is a revised version of Kia’s 3.3-liter V6 engine, which has been retuned for improved fuel economy.  With an estimated 290 hp on tap (exact power output and fuel economy figures will be released closer to the vehicle’s on-sale date), the engine sends power to the front wheels via Kia’s first FWD-based eight-speed automatic transmission.  The newly developed transmission is highly efficient, providing quick and crisp shifts for a more enjoyable driving experience that will set it apart from its competitors.  Despite having two extra cogs, the eight-speed transmission, which was designed in-house, is lighter than the unit in the outgoing model. 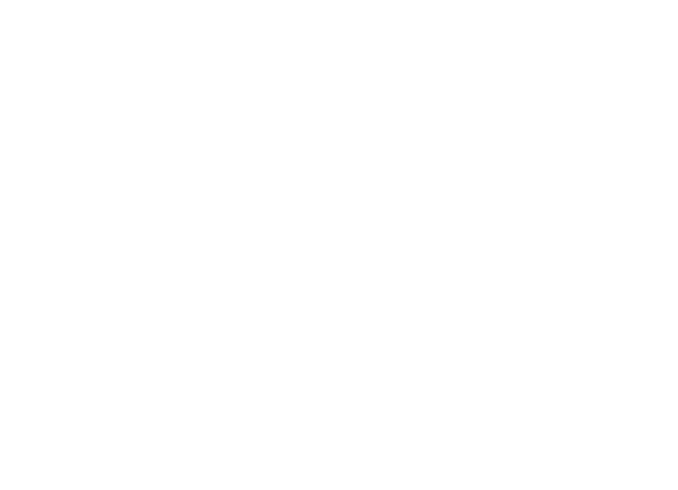 Kia engineers also focused on durability and reliability during the development of the all-new Cadenza.  Running the V6 at full power and under full-load conditions for 41 consecutive days equates to more than 100,000 miles of real-world use, providing owners with the confidence that the 2017 Cadenza is built for the long haul.