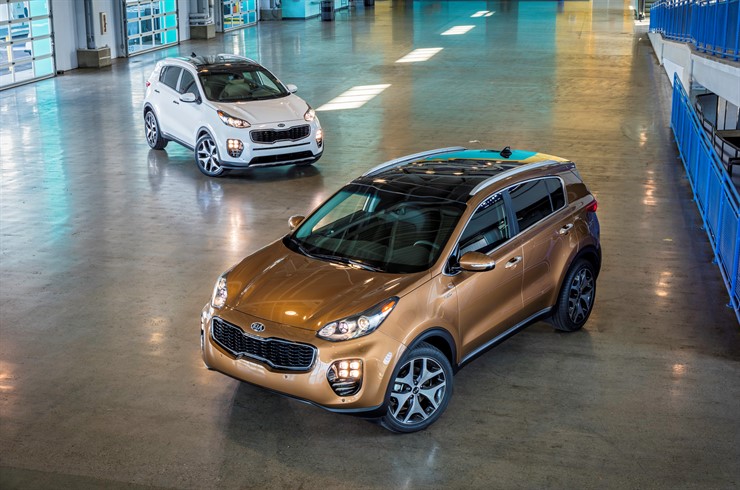 The All-New Sportage is Kia’s compact utility vehicle for the new era of everyday transportation. It’s styling and purpose meet the needs of a fuel efficient and comfortable car with the cargo space and terrain capabilities of an SUV.

[ads id=”0″ style=”float:left;padding:9px;”]Overall, the Sportage offers like many of Kia’s other vehicles more value for the money.

Its euro inspired design comes with a bunch of new twists that make the Sportage stand out from similar vehicles. For instance, one of the most significant differences was the overall body design which went against the grain of typical SUVs that had the standard box-like construction into something more attractive and most definitely aerodynamic. With that said, Kia did not cut corners in safety or structure of the vehicle.

One of the most intriguing facts about the Sportage is that much like the Kia Optima, the Sportage is reinforced with High Strength steel totaling about 51% of the chassis of the car primarily around the passenger/driver area. The benefits of such steel gives the car better handling dynamics since there Is less flexing throughout the chassis, and is lighter than traditional steel by about 55 pounds.

[ads id=”0″ style=”float:left;padding:9px;”]Another cool feature is the Sportage carries Apple car play and Android Auto which when your phone is connected it transfers the phones capabilities and visuals to the center console display. The list of features is almost endless with full leather interior, to heat/cooling seats, and the panoramic sun-roof to just name a few. The ride was also comfortable with great headroom for taller individuals and plenty passenger space both front and back seats. One very appealing feature that has been overlooked by many manufacturers is the availability of plug-ins for passengers. In this day and age, it’s more of a necessity to have additional outlets in vehicles to charge or maintain smartphones and other digital devices. Kia foresaw such a need and fulfilled it by adding two more charging ports for rear passengers. It’s small details like these, that make Kia stand out from cars similar price points but lesser amenities.

In driving Sportage SX, it did not disappoint in performance with its 2.0 Turbo AWD system. Currently the LX and EX models carry the 2.4L naturally aspirated motor which offers a respectable 181-horsepower but for those that want a little more power and enjoy a boost during their commute,  the 240-horsepower 2.0 turbo is for you. The Sportage inherited many other perks that are in the current Optima, including the sporty flat bottom steering wheel that is commonly seen in race cars, as well as the paddle-shifters and sport tuned set-up with independent rear suspension.

The Sportage is available in both front wheel drive and all-wheel drive in all trims. After driving the AWD version, it made the car feel planted to the ground with great cornering and power delivery across the board. Under such driving it is hard to believe it’s a “CUV” and not a car because of how well it performs. In further reflection of their intelligent AWD system, it will be a great aid for those who travel to the snow or take the more rural roads to the mountains/desert.

If it’s one thing Kia does a really good job at, it is the amount of amenities/features they put into their vehicles while retaining the cost at a relatively affordable rate. Furthermore, Kia seems to not only meet expectations but raise the bar for other automakers. For instance, for those music connoisseurs out there, the Sportage comes with a Harman/Kardon audio system which sounds amazing with the Clari-Fi feature that restores the quality of compressed music to provide a much more crisp sound.

In reviewing the price point for the new Sportage, Kia has separated the trims into 6 options. Beginning with the entry level Sportage, the CUV starts at $22,990 with the 2.4L Naturally aspirated motor and front wheel drive-train. The next level is upgrading the LX to All-wheel-drive which is $24,490 which isn’t a big jump on price considering the added benefits. Afterward we upgrade to the EX trim which is more or less the sweet spot for the owners interested at a reasonable price but with many of the technological features like push button start, rear USB chargers, leather and heated seats, plus more.

[ads id=”0″ style=”float:left;padding:9px;”]The MSRP for the EX is $25,000 with the motor is also being a 2.4L NA for optimum fuel economy. The next step up would be the AWD version of the EX at $27,000 which combines the technological capabilities of the Sportage with the benefits of added traction during inclement weather situations. Last is Kia’s optimum trim, the SX which includes not only the 2.0L turbo shared in the Optima, but also the premium sound of the Harman Kardon audio system with multiple driver assist features like autonomous emergency braking system, lane departure warning system, and so much more.

One of the more interesting features is Kia’s smart-power lift gate systems which wirelessly detects the owner of the vehicle via remote at the rear of the vehicle, and opens the hatch by itself without any human interaction. A great feature when carrying something that requires both hands. The MSRP for the SX with the front wheel drive train is $32,500 with the final AWD upgrade being $34,000.

After driving the Rio, Forte Turbo, and Optima SX, my review of the Sportage is that it is a truly good car for new generation of the everyday life. It fits the needs of the modern individual who is more likely to travel and see the country side whether it be desert, beach, or mountain while retaining the style and economical needs of a city car. It’s handling and power combined with the AWD system make the car a fun ride with deceivingly good handling. It’s hard to say what age group or type of people the Sportage is made for because it is so well rounded across the board. In one hand it’s a great college/young family vehicle with passenger room, cargo space and fuel economy. On the other hand, it’s a great option for more mature families or couples who would like to travel and enjoy the outdoor life more but not break the budget. Overall, Kia has continued to improve with every new model and give it’s consumers more value for the price and the Sportage is proof of that.