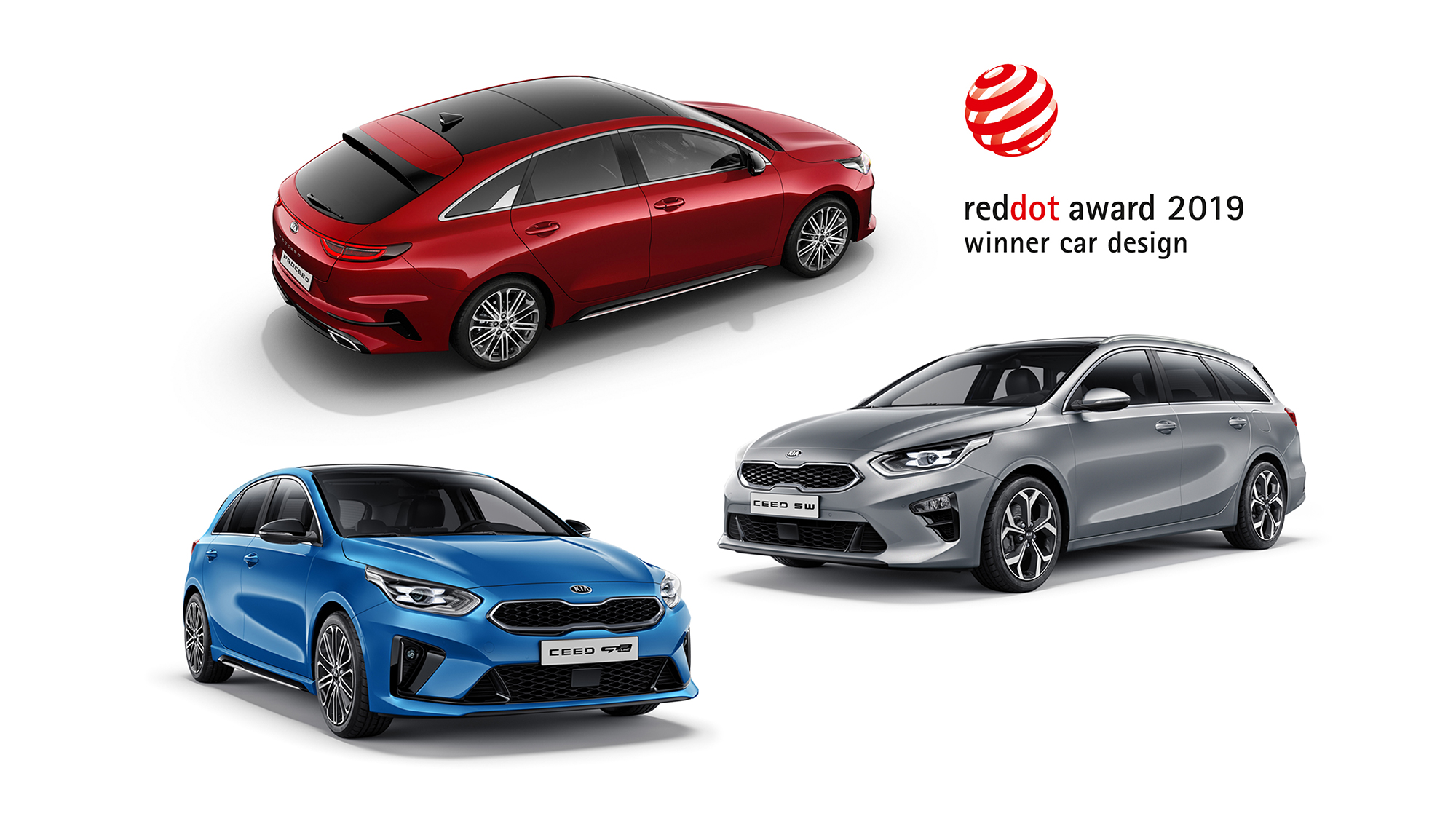 Following the launch of the new third-generation Kia Ceed, now on-sale across Europe, the three new body styles within the range have each received a prestigious Red Dot Award for design.

This triple triumph in the world-renowned design competition represents the second consecutive year in which Kia has picked up a hat-trick of Red Dot design awards, following similar success in 2018. The manufacturer also took home three iF Design awards earlier in 2019.

The achievement underscores the Korean manufacturer’s reputation for first-class design, which, for over a decade, has been shaped by Peter Schreyer, President of Design and Chief Design Officer for Kia Motors. The brand won its first Red Award in 2009, with the Kia Soul. Since then, Kia has been awarded a total of 24 Red Dot Awards for its vehicle designs.

The latest trophies have been awarded to each of the three new Ceed variants: the five-door Ceed hatchback and Sportswagon models, launched in mid-2018, and the new ProCeed five-door shooting brake, which went on-sale in Europe earlier in 2019.

The third generation of the Kia Ceed saw the spelling of the model’s name changed (it was previously the Kia cee’d), but not its meaning. Like the original model launched in 2007, the new Ceed is a compact car for the Community of Europe, with European Design. A true European, the new model range was designed at Kia’s European design center in Frankfurt under the direction of Peter Schreyer and Gregory Guillaume, European Head of Design. Engineering and development was carried out by the brand’s research and development center in Rüsselsheim, and all three body types are manufactured in Slovakia.

Clean, straight lines characterise the design of the new Ceed family, which takes inspiration from the new Kia Stinger fastback sports sedan – itself a Red Dot Award winner in 2018. The five-door Ceed hatchback is wider and lower than its predecessor, with the cabin positioned further towards the rear of the car, providing a sportier stance and shape. In profile, the C-pillar gives the upper window line an elegant ‘half-moon’ shape.

The Ceed Sportswagon brings more space than ever to the compact class: the third-generation model has increased in length, and offers owners more luggage space (625 litres) than most of its rivals, and even a number of higher-segment vehicles. With its intelligent proportions and a dynamic new design, the Ceed Sportswagon is sportier than any of its predecessors.

The new ProCeed features a completely new design for Kia, and is the first compact shooting brake from a mainstream manufacturer. The ProCeed merges stunning, elegant design with the space and versatility of a tourer, standing out from its siblings with its own unique posture and proportions. 1,422 mm in height, it is the lowest vehicle in the family car segment. The defining element of its profile is the dynamic roofline, which ends in the steeply-raked rear windscreen. The distinctive design is particularly noticeable from the rear, with an illuminated line connecting the LED rear lights, giving the ProCeed a unique light signature.

Both the ProCeed and Ceed are available as a high-powered ‘GT’ model, powered by a 150 kW (204 ps) 1.6-litre T-GDi (turbocharged gasoline direct-injection) engine. A total of six low-emission gasoline and diesel engines, each complying with the new Euro 6d-TEMP emissions standard, are available across the Ceed family. The broad spectrum of the latest technologies include an optional ‘Level Two autonomous’ Lane Follow Assist system and heated windscreen.