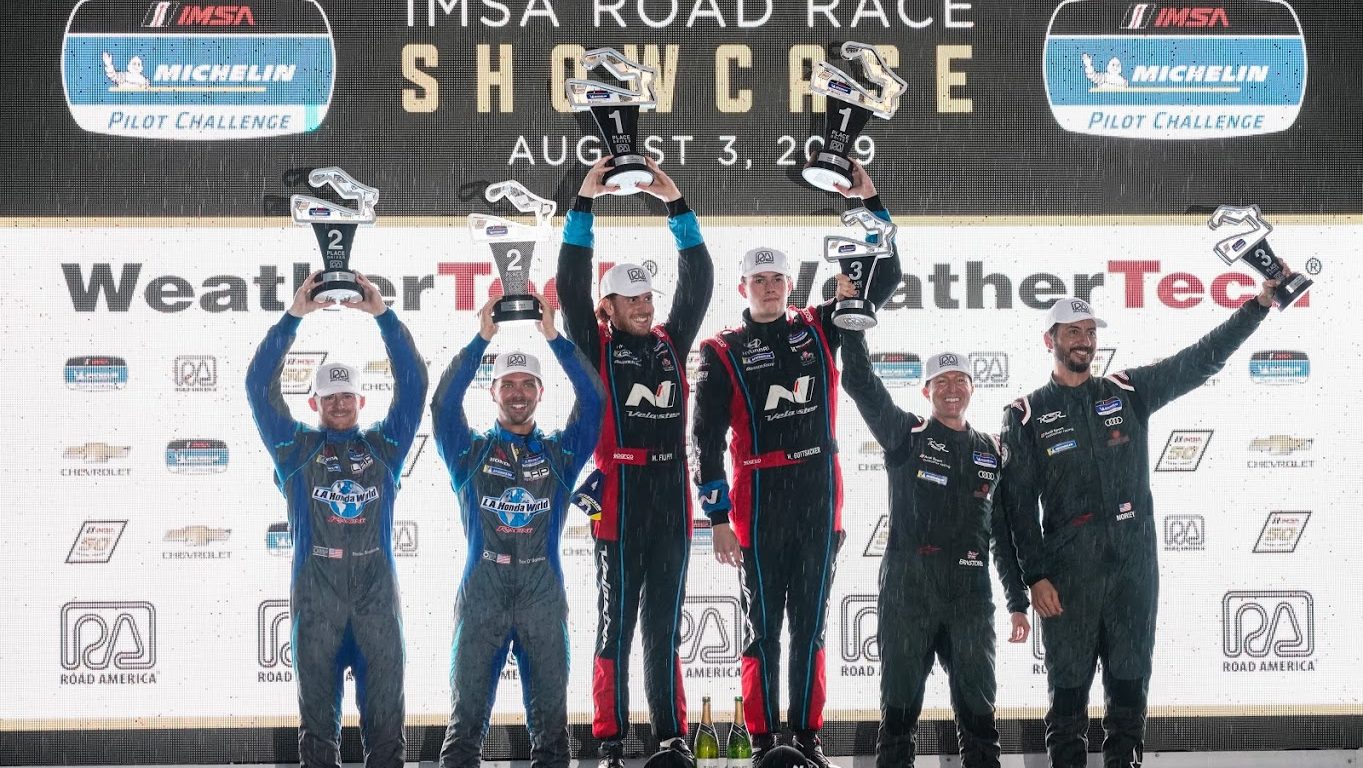 A lightning storm delayed, then shortened the Road America 120, followed by intermittent rain and wild track conditions, but nothing could stop young guns and Mason Filippi and Harry Gottsacker from a perfect race, which resulted in their first IMSA Michelin Pilot Challenge victory.

Over an hour-long weather delay shortened the race from 120 to 75 minutes, but it was worth the wait for the BHA crew.  With quiet skies but potential for rain still looming, Mason Filippi and the #21 crew gambled and chose to start the race on slick tires. The Road America racetrack is over four miles long, conditions and weather can be different from one section to the next.  In addition, it was Filippi’s first time racing at the legendary road course, he had his work cut out for him.  The green flag dropped and Filippi, who qualified sixth, dropped to 13th in the opening laps as the still wet track was like an ice rink under his slick tires.  He briefly chased the field and then as the dry line developed, Filippi patiently and precisely used his slick tires to work his way through the competition.

Strategy became the challenge, as each driver is required to complete 25 minutes of drive time in the race.  That coupled with an abbreviated race and heavy rains once again looming on the radar meant that Kyle Compton, lead engineer of the #21 Hyundai Veloster N TCR, determined Filippi would stay on track until the rain returned.  Filippi raced to third position, at times five seconds per lap quicker than the rest of the TCR cars.  The #21 team finally made their only pit stop with exactly 25 minutes remaining when Harry Gottsacker took over the cockpit as the rain returned.  Gottsacker returned to the track in seventh position, and his stint was flawless.  He masterfully maneuvered the #21 Hyundai Veloster N TCR through the top five to second position and chased the leader through the heavy rain to the checkered flag.

During the cool down lap, IMSA race control announced leading TCR car, driven by Ryan Eversley, which finished just ahead of the #21 Hyundai Veloster N TCR, would be disqualified for failure to meet the drive-time requirements.  IMPC rookies Filippi and Gottsacker were elevated to first, scoring their inaugural IMSA victory after just seven races.  The victory catapulted Filippi and Gottsacker to third in the championship standings with three races remaining.

Michael Lewis and Mark Wilkins, the championship points leaders were a little less fortunate in the 75-minute scramble.  The #98 Hyundai Veloster N TCR started on the front row for the fourth consecutive race.  Wilkins qualified second and, as the championship leaders, the team chose the more conservative strategy and started with rain tires.  Wilkins had a heated battle throughout his stint with the Shelby Blackstock, his closest championship contender.  As the track dried, the rain tires handicapped Wilkins and the #98 team made their first pit stop, changing to slick tires, and Michael Lewis took over, 47 minutes into the race.  All was well for Lewis…for a very short time before the weather deteriorated and chaos took over on track.  Multiple cars spun in the late stages of the race, but Lewis took care of his #98 Hyundai Veloster N TCR, and hovered in the top five.  With ten minutes remaining, the #98 suffered a puncture in their left rear tire and were forced to pit.  Coincidentally, the skies opened, and the stop allowed the #98 team to return to rain tires.  Lewis took advantage of the wet set-up and passed multiple cars on the last lap shoot-out after the re-start, and the #98 car finished fourth and kept their championship lead.

“Such a great day for the Hyundai team at Road America.   Harry and Mason have been knocking on the door the last several weekends and I am so pleased they were able to pull off the victory, once again showing the Veloster N TCR is super in all conditions.  The championship battle is tightening up too, so it should be an exciting last few races!”

“Congratulations to my teammates Harry Gottsacker and Mason Filippi on their first win in IMSA Michelin Pilot Challenge!  It is awesome to see them succeed; they deserve it. Mark and I had a race that looked to be clean and simple, but in the end the race proved to be chaotic.  I owe our complete success in finishing in fourth place to our teams fast pitstops.  We had one crucial pit stop to make in a short amount of time so we wouldn’t go a lap down, and the team did it.  We kept our championship lead and that is important with just three races to go. I wish I could have brought our Hyundai Veloster N TCR to the podium, but I made a few mistakes and I will look to fix those.  Mark had another great drive and it was a great day for Hyundai in the manufacturer’s championship, lots of positives to take away from a crazy race. Thank you to all of the fans who hung in there with the weather to watch our race, I am glad they had such a great show!”

We raced at Road America this weekend. It was a crazy race, and with really fast pit stops from @bryanhertaautosport and a lot of luck, we finished in P4. @markjeremywilkins qualified the car in P2! He drove first and handed me a clean car. I wasn’t as clean, but we finished the race. Our teammates won! Well done @harry_gottsacker and @mason_filippi! You Thank deserve it! Congratulations to the team on another victory! @asetests @cometicgasket #racing #rain #wisconsin #VelosterN #HyundaiRacing #Hyundai #thankful #friends #stance #stancenation #michelin #toughracing

“I’m so happy for Mason and Harry on their first win of the season.  Congratulations to them on excellent drives in some very challenging conditions!  It was a wild race from start to finish.  We elected to start on wet tires and ran strong early before the track dried and slicks became the right choice.  This lined up well with the first pit stop and Michael did a great job battling changing track conditions as the skies opened once again.  His last lap charge on wet tires was fantastic and we collected some valuable championship points.  From a manufacturer’s perspective, it was a great points scoring day for Hyundai and our Veloster N TCR once again was excellent in variable conditions!  It’s going to be an exciting final three races of the season!”

“It feels great to grab our first Michelin Pilot Challenge victory!  We have had some good runs all season and we knew that if we continued to work as a team, the result would come.  Every weekend we run, the Bryan Herta Autosport team gets stronger.  Mason did a great job in tough conditions to fight his way up the field and bring me a good car.  The team had a great strategy and put us in a position to capitalize once the rain arrived. I knew that once we had the yellow to bring everyone back together, I had a shot at it.  This is the most rewarding victory of my career.  Doing this at Road America in front of our friends and family is the best feeling.  Good thing we have a few weeks until VIR to celebrate!”

“The race was insane!  The Hyundai Veloster N TCR was on point all weekend and Road America is a great track.  I can’t thank the Bryan Herta Autosport guys enough!  They really killed it this weekend.  From rain to dry to rain again, then the win…it was a race that kept us on our toes the whole time.  I am thrilled to be an IMSA race winner in my rookie season and my first time at this incredible track.  I can’t wait for VIR (Virginia International Raceway) in just a few weeks.”

*Indicates fastest lap of the race, set by Mark Wilkins