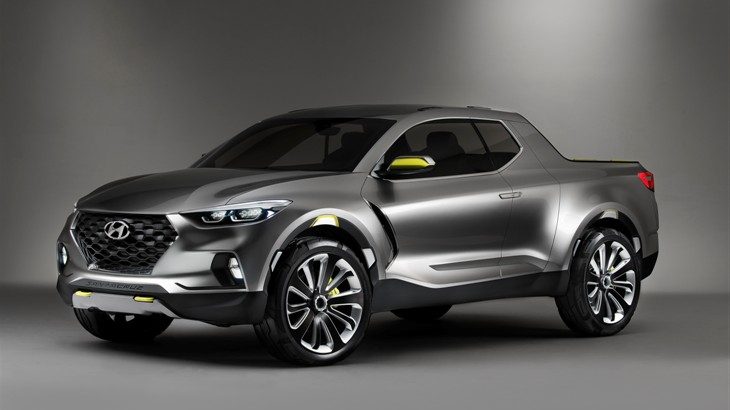 When the Hyundai Santa Cruz was shown as Concept model, it was based on the Tucson chassis and now new comments by Hyundai Australia Chief Executive John Kett other plans are in the mix.

In a interview with John Kett with Which Car he explains the new route Hyundai is taking for this Pickup Truck.

“What’s clear to us is that if we’re going to bring a ute out, it had better be a ute,” said Kett, a long-time stalwart of the car industry both here and overseas. “We’ve got past the first hurdle of what it needs to look like, but it needs to be functional as well. That’s the important part. We’re going down that pathway and we’re working towards it. We just have to make sure that when it arrives, it’s a bloody ute.”

As we mentioned the the Concept Pickup Truck was based in a ‘unibody’ design but now the plans has change to a ladder-frame chassis to be able to compete with rival of Toyota Hilux and Ford Ranger, and part of the cost will be shared with the sister company, Kia Motors.

“We’re looking at a range,” he confirmed. “When you cut up the ute market, you split it up between 4×4 and 4×2, who owns 4×2 and what powertrain goes with that [internally] and then 4×4 crew cab versus cab/chassis and so on… we want to be smart about it and that’s what we’re going through at the moment.” “Andrew [Tuatahi, Hyundai product manager] is having a lot of sleepless nights over this because we’re going fast down that road, but we do need to be smart about it, so that when people look at it, they say ‘yep, that’s it’.”

If all there planning goes well, hopefully we might be able to see a N varient to compete with the Ford Raptor too.

The plans of Hyundai making the Pickup Truck was already confirmed by Michael O’Briend, Hyundai USA vice president of product, corporate and digital planning, and more than likely it will be made at the Hyundai Motor Manufacturing Alabama Plant. The only thing left to be seen on spyshots is Kia’s Pickup Truck, in which Kia’s new U.S. COO, Michael Cole, hinted at such a model by saying that a pickup is “something we could look at”