Another Hyundai Vehicle Burst into Flames 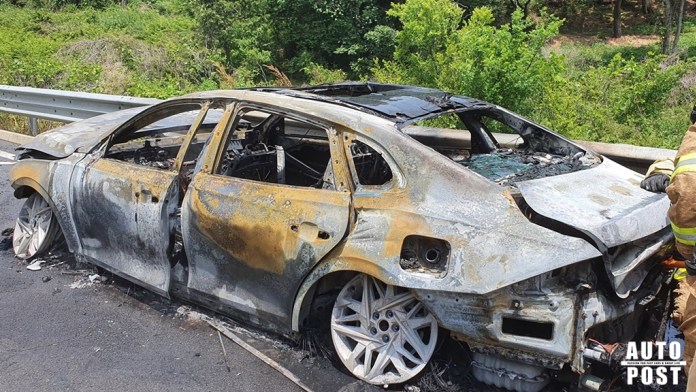 After we noticed about the Genesis G80 fire incident, reportedly related with an external cause, just two days later, a new Hyundai Grandeur was completely burn-out in just one minute. Thanks to our colleagues at AutoPost we will know more about the incident as they interviewed the owner, and at this time we can say it was a vehicle defect.

Autopost recently conducted an interview with the owner, and according to the owner’s statement, unlike the G80, there were no external factors as well as there were signs before the fire. The fire-fighting vehicle is a facelifted ‘The New Grandeur’ 2.5 gasoline model with the highest Caligraphy trim. According to Kim Min-hyuk, the owner of the car, the vehicle had been bought six months ago, and the accumulated mileage was only 3,000 km, so it was just like a new car.

The claim that the vehicle is defective is weighed by the fact that the G80 case is different, while in the Grandeur the accelerator and brakes haven’t worked, and the instrument panel has even been warned that a system check is needed. Also, according to Kim Min-hyuk, the car burned in just one minute and, unlike the G80, it was also completely burned out.

In addition, considering that it was a vehicle that was released six months ago and that is a new car that only ran 3,000 km in that time, further investigation is necessary. Kim Min-hyuk said, “I didn’t believe what the situation was, and when I saw the car that had been burned out after the lights went out, I felt like I had lost a friend.”

In fact, it is not a day or two that a defect or quality problem is found in the gap between the systems used by any car manufacturers. Cars are also made by humans, so we can ideally think that the car should be free of defects, but most likely you will agree that there is no perfect car. Defects are present in all manufacturers’ products. But why do we have different images for different manufacturers and evaluate the manufacturers differently? The reason is simple. After finding the defect, how you deal with it will change your thoughts and attitude toward the manufacturer.

According to the US Safety Recall report, Kia Motors reported the issue to NHTSA on February 14 of this year. Target vehicles are Sedona (domestic name Carnival, 2006~2010) and Sorento (2007~2009). According to Kia Motors, moisture may flow into the ECU that controls the ABS module, causing electrical problems, which can cause a fire in the engine.

To reduce the risk of property damage or injury, Kia Motors currently recommends that cars be parked in private lands, not in garages, until repairs are completed. It was said to be watched.

In the US, Hyundai Kia Motors is also reimbursing 930 billion won to its borrowers in May. According to the American ABC News, Hyundai Kia Motors’ owners are expected to receive an agreement of close to US$ 760 million and approximately KRW 930 billion in Korean money. It was the result of a California class action filed by millions of Hyundai Motor owners.