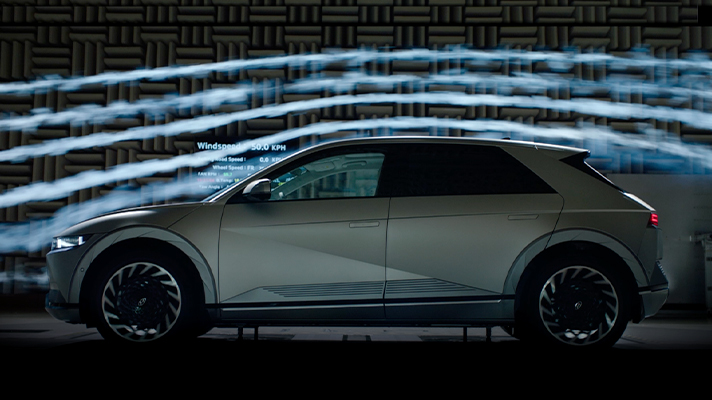 Ioniq 5 realized innovation that fits the first exclusive electric vehicle of Hyundai Motor Company through a functional design that takes into account the spacious interior space and aerodynamics in the future-oriented image. We looked for the aerodynamic elements behind the Ioniq 5.

The car runs through the air every minute. The higher the driving speed, the stronger the resistance of the air it encounters, and the more intense the movement of the air flowing along the vehicle body. The interaction between the car and the air while driving greatly affects the car’s driving performance, fuel economy (electricity), driving stability, and noise. This is why all car manufacturers put a lot of effort into aerodynamics studies that deal with car movement and air flow.

Ioniq 5 maximizes interior space by placing the battery flat on the 3,000mm long wheelbase and the bottom of the body.

The Ioniq 5 is Hyundai Motor’s first dedicated electric vehicle, and is a model that marks the beginning of a journey toward’Progress electrified for connected living’. In order to create an innovative experience worthy of the electric vehicle era and a spacious space optimized for a passenger-specific lifestyle, the IONIC 5 has a long 3,000mm wheelbase (distance between the front and rear wheel centers) with the battery placed flat on the bottom of the body. In addition, a tall SUV style was applied to maximize space by shortening the front and rear overhangs (the distance from the center of each wheel to the end of the body), and to increase space utilization.

However, the convenience of the rear seat occupants to secure the SUV style and the practicality of the interior space, the expansion of the cargo space, and the high rear glass are somewhat disadvantageous conditions for aerodynamics. In other words, practicality and aerodynamics are often inversely proportional.

The Ioniq 5 has been tested for a long time in wind tunnels to optimize aerodynamic performance.

In order to overcome these adverse conditions, Hyundai Motor Company has undergone many tests with great care with all departments related to aerodynamic performance for a long time.Based on a design optimized for aerodynamics, a functional design was applied to the Ionic 5 to offset the shortcomings and design. Raised the completeness of. Aerodynamic performance is considered in various areas such as the rear spoiler, which is a key element of aerodynamic performance (the ability to handle the interaction between the car and air), the intelligent air flow controller (Active Air Flap, hereinafter AAF), the wheel, and the undercover. A streamlined clamshell bonnet with a low seat, a gently inclined A-pillar, and the lowest ground clearance (height from the road surface to the body) compared to a typical crossover are also the aerodynamic elements of the IONIC 5.

A key item in aerodynamic design, the rear spoiler

The Ioniq 5 is a model that continues the design heritage of Pony, Hyundai’s first unique model. The photo shows a comparison of the concept model of Pony and Ioniq 5, the EV 45 concept.

The IONIQ 5 inherits the design heritage of Hyundai’s first unique model, Pony, while embodying Hyundai’s vision for future mobility. This is the reason why the traces of pony can be seen in the silhouette of the Ioniq 5, which minimizes the parting line that is divided into lines that are concise side and line, and side and side meet.

The rear spoiler of the IONIQ 5 is a key component developed to reduce air resistance.

The rear spoiler is a key component in the aerodynamic design of an automobile. When the car is running, air flows to the left and right and up and down the car body. At this time, the rear spoiler reduces the force (lift) that the car is trying to rise due to the air under the car body. At the same time, it is controlled so as not to impair driving stability by minimizing the eddy (vortex) that the air that has passed over the vehicle body and formed at the rear of the vehicle. Reducing the lift is often applied to high-performance cars or race cars running at high speed, and the rear spoiler of a general passenger car is mostly to increase driving stability and fuel economy by adjusting the vortex of the air. For this reason, fine tuning such as the shape and angle of the rear spoiler is required according to the concept of the vehicle.

The rear spoiler of the IONIQ 5 was developed with a focus on reducing air resistance.

In the case of the Ionic 5, it has enough downforce (the force to press the vehicle body from top to bottom) to increase driving stability thanks to the weight of the PE system such as batteries and electric motors, as well as the shape with a gentle roof line. Accordingly, a rear spoiler was developed with a focus on reducing air resistance. The rear spoiler of the IONIQ 5 is made with an optimal aerodynamic design through the development process of fine adjustments at 0.1° intervals. Clogging the area next to the rear spoiler also plays an effective role in controlling airflow and reducing air resistance.

Electric vehicles are also equipped with radiator grills for cooling the PE system.

In an internal combustion engine car, air is passed through a radiator grill to effectively cool the engine heat generated while driving. Electric vehicles also need cooling because electric motors and batteries generate a lot of heat. Based on Hyundai Motor Group’s electric vehicle platform E-GMP (Electric-Global Modular Platform), Ioniq 5 is cooled by spraying cooling and lubrication oil directly to the internal coil, rather than the conventional method where a cooling water line was installed outside the electric motor. Innovatively improved performance. The reduction in size and weight by integrating an electric motor, inverter and reducer is a new feature of the IONIQ 5 PE system.

One of the main components of cooling the IONIC 5’s PE system is the Intelligent Airflow Controller (AAF). The existing AAF was developed to reduce the cooling resistance that occurs when cooling the engine through the radiator grill in an internal combustion locomotive, and it was a concept to reduce the resistance by opening and closing the flap (partition) depending on whether or not cooling is required.

The external AAF applied to the IONIQ 5 has a high cooling resistance reduction efficiency by reducing the step difference from the front bumper surface compared to the general AAF, and when the grille is closed to reduce air resistance, it forms a single surface with the bumper to give a visually clean feel . The difference in the air resistance coefficient that occurs when the AAF is opened and closed is about 0.013, which provides an effect of increasing the distance available for one-time charging of about 7.3 km.

Wheels that rotate at high speeds are places where air flow is disturbed and have a great influence on the fuel economy of automobiles.

One of the factors affecting the range of an electric vehicle is the tire. Tires are the only parts that connect the car and the road surface, and rolling resistance varies depending on the shape and material, which has a great influence on the fuel economy of the car. The rolling resistance of the tire can be reduced by varying the arrangement of the tire and the size and shape of the wheel. The Ioniq 5 is equipped with 235/55R 19-inch or 255/45R 20-inch tires, and both wheels minimize the open area of ​​the wheel and have a flat front surface considering aerodynamic performance.

Ionic 5 minimizes air resistance by designing the tires to not protrude sideways when viewed from the front.

In addition, the amount of air hitting the tires while driving is minimized by preventing the tires from protruding outside the vehicle body when viewed from the front. In addition, in order to minimize the resistance generated when the wheel rotates at high speed, the gap between the tire and the wheel is reduced, and the air generated along the tire surface is designed to escape naturally.

The digital side mirrors applied to the IONIQ 5 are innovative, advanced specifications that reduce air resistance while driving and provide a comfortable view.

Controls the air under the car body, tight undercover

Ioniq 5 controls airflow by meticulously blocking the lower part of the vehicle body, such as applying an undercover to the front and rear of the battery and the rear member.

In general, the influence of the shape of the upper and lower parts of the vehicle on the aerodynamic performance is said to be 45% and 35%, respectively. An electric vehicle with a flat battery installed under the body has a faster airflow under the body than an internal combustion locomotive. For this reason, if the flow of air introduced into the front and lower parts is maintained smoothly to the rear end of the vehicle body, air resistance can be reduced and efficiency can be increased.

In order to maximize the advantages of an electric vehicle with a flat floor, the Ioniq 5 has an undercover installed in the front and rear areas of the battery to meticulously fill the gaps that may catch air. In addition, the undercover was applied to the rear member where the rear suspension and electric motor are mounted, so that air can escape to the rear of the vehicle body. The battery rear undercover and rear member undercover are the first parts applied by Hyundai Motors, and this can be said to be the result of an innovative idea suitable for a dedicated electric vehicle to the invisible area.