Kia SOUL Facelift Spied In & Out 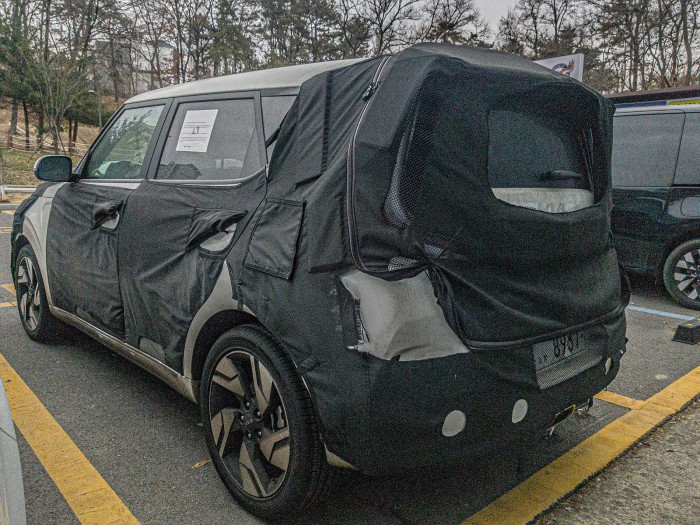 We already spied the mid-cycle facelift for the Kia SOUL. The current generation SOUL was launched on November 2018. The boxy compact SUV (codenamed as SK3) had a good level of sales with around 40,000 units a month in the US-market and now Kia will try to keep it fresh for the next 2-3 years with changes like we can see in the picture above. Now a new set of pictures taken closely allowed to take a closer look into the updates.

Looking at Kia’s recent facelift’s, like with the K3 facelift, we can expect the arrival of new engines, for example the addition of the CVVD 1.6 Turbo engine while we also dream about a more powerful GT-Line version to spice things up! What is not expected is increasing the electric range on the eSoul.

It is pretty difficult to see what’s under the heavy camouflage, but the changes won’t be more than front and rear redesigned bumpers (again, we can see the same look so this should be an early prototype), new wheels, the grille which also looks like having a different design. Headlights and taillights will also change its graphics.

The Soul should receive latest safety pack, as well as new IT system, maybe from 10,25″ to a larger screen and an updated digital cluster (like the one in the All-New K3/Forte). This is the first time that we can see the interior but unfortunately is heavily camouflaged.

What do you expect for the refreshed boxy?