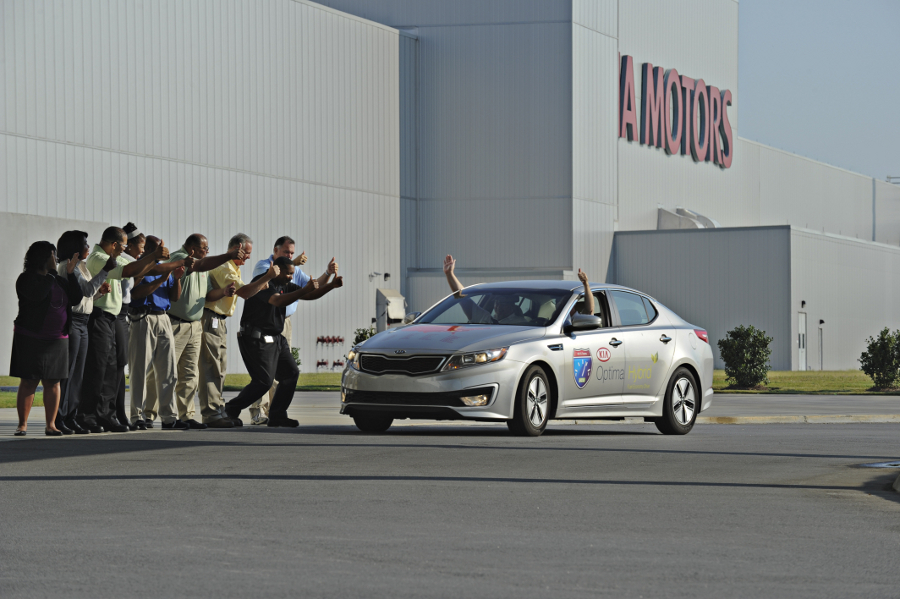 Kia Motors is one of the automotive industry’s current fuel economy leaders and today the brand is celebrating the setting of a new Guinness World Record for the lowest fuel consumption in a hybrid gasoline vehicle, while driving through all 48 adjoining U.S. states.

Drivers Wayne Gerdes from Wadsworth, Illinois, and Chris Bernius from New York City, successfully piloted a factory-standard 2011 Kia Optima Hybrid sedan through a 7,899 mile route across America and achieved an incredible average fuel consumption of 64.55 mpg US (3.64 l/100 km), beating the car’s official EPA highway fuel consumption figure by 61.37 per cent. Kia’s 48 state challenge was completed in 14 days driving an average of 564 miles per day. The Optima Hybrid used just over 5.5 tanks of gasoline to complete the route, recording an average distance of 1,418 miles between fill-ups. To comply with Guinness World Record guidelines, the Optima Hybrid had to carry two people and their luggage throughout the journey.

The record attempt was verified by Philip Robertson, Adjudicator at Guinness World Records, who also presented the drivers with their Guinness World Record certificate at 1 an official handover ceremony at Kia Motors’ manufacturing facility in West Point, Georgia on September 12. The record set is officially titled “Lowest fuel consumption driving through all 48 contiguous U.S. states in a gasoline hybrid car,” which is a new category created by Guinness World Records. In order to qualify for a new record, the Kia Optima Hybrid was required to achieve a minimum of 52.27 mpg, which the fuel-sipping Optima Hybrid exceeded by 23 per cent.

After a send-off by local dignitaries and Kia team members on August 26 at Kia’s manufacturing facility in West Point, Georgia, the drivers departed on their epic journey in a clockwise direction, with the two drivers averaging approximately 564 miles per day. They finished their route in the city of Greenville, South Carolina, just over two weeks later on September 9. After a rigorous accreditation process by Guinness World Records, the drivers and car were transported to West Point for the closing ceremony and celebration.

Senior Executive Vice President and COO of Kia Motors Corporation, Thomas Oh, commented, “Kia Motors is deeply proud to have set a new Guinness World Record. It is testament to the quality of the design, engineering and production methods of the Kia Optima Hybrid. The drivers had to complete their unsupported drive through all kinds of American terrain and weather conditions and they did it without a single hitch from the Optima Hybrid while setting what is such an impressive fuel consumption figure.”

“While travelling across the United States the Optima Hybrid experienced temperatures ranging from more than 118 degrees Fahrenheit to less than freezing point. The team climbed through the formidable Rocky mountain chain and negotiated rush hour traffic in Chicago, New York City and Las Vegas – which makes the Optima Hybrid’s fuel consumption figure all the more impressive,” added Mr Oh.

Record-breaking driver, Wayne Gerdes, said, “The Kia Optima Hybrid was the perfect vehicle for this long road trip. It is spacious, comfortable and fun-to-drive, and the parallel gasoline-electric powertrain provided considerable efficiency at highway speeds and the car performed flawlessly throughout the 7,899 mile drive”.

“The remarkable economy figure we achieved included driving in all kinds of conditions, from straight open highway and deserts to gridlocked city traffic, so this really was the ultimate demonstration of the real-world fuel economy that any Optima Hybrid owner can achieve with attention to the details of their driving style.”