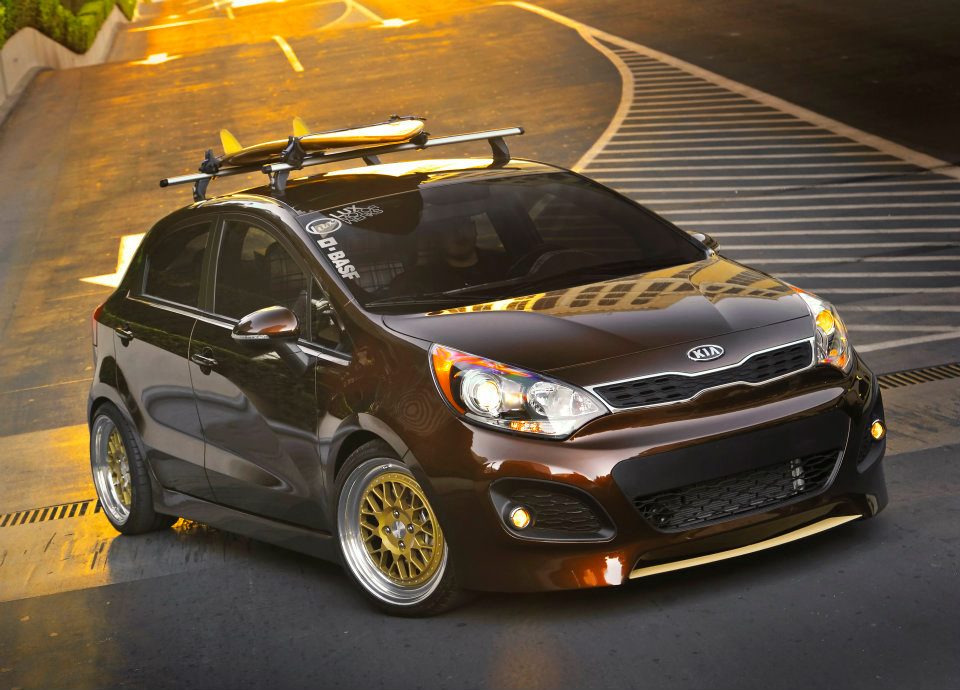 Kia arrives in fabulous Las Vegas for the 2011 SEMA Show with a roster of six outrageous sports-themed vehicles, including two cars built by the world famous West Coast Customs (WCC). Additional vehicles were conceived and built in-partnership with the popular lifestyle magazine, Antenna, as well as GoGoGear.com and Kia’s racing partner, Kinetic Motorsports.

Antenna enhanced the stylish Rio 5-door’s exterior with a sunset-metallic golden-brown paint, custom body kit with a front splitter made of wood to match the surfboard on the roof, and rear fascia with center-mount exhaust. The car has been lowered with a modified suspension for better handling and eye-grabbing 17-inch three-piece gold wheels. To top off the exterior, a Thule® roof rack and hand-made wood surfboard are mounted on top.

The interior of the Antenna Rio 5-door features custom front and rear seats, dash and door panels upholstered in brown and beige plaid waterproof bathing suit fabric, a wood grain center console, and headliner upholstered in dark brown suede with a towel holder built in to complete the retro-surf look. The rear center console has been modified as a shelf to hold beach-themed accessories that are ready for some fun in the sun, including sun tan lotion, surfboard wax and bottled water. The Rio 5-door’s massive rear hatch area has been modified to hold a retro gaming console that plays 80’s-style arcade games, a retro-looking record player to play music, mood lighting, and shelves to hold sandals and clothing. 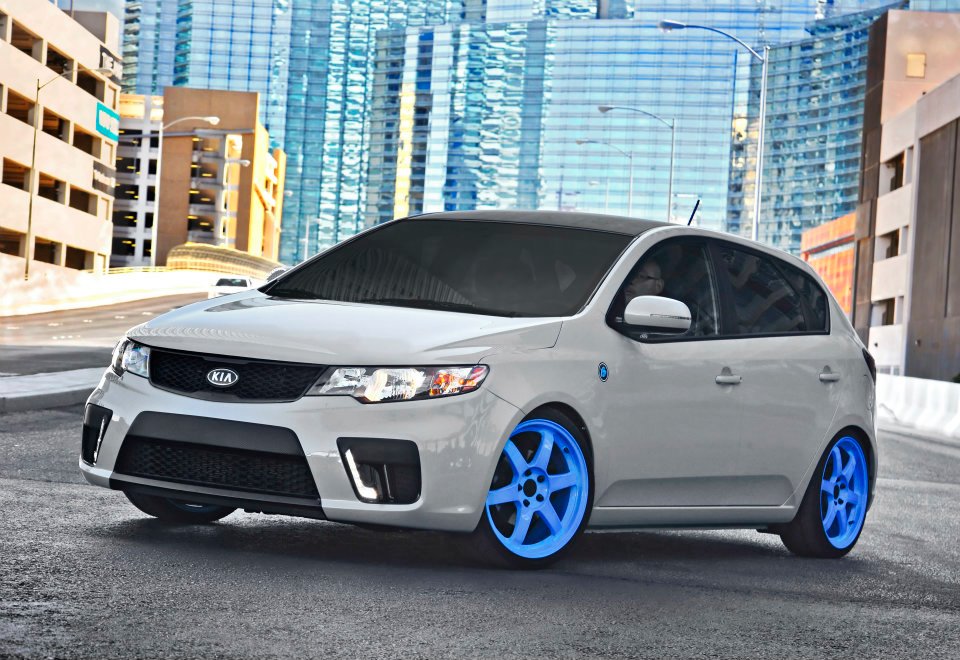 Hockey players carry a lot of bulky gear to and from the rink, and the Antenna Hat Trick Forte 5-door can handle it all with a custom hockey stick holder that stretches from the trunk through the center of the vehicle into the cabin. The power play continues inside as the rear bench seat has been converted to two bucket seats with custom upholstery and there are custom-molded sports bottle drink holders in the center console. Rubberized flooring in the front and rear seating areas simulates the surface found outside the rink, and the action continues off the ice with a mini air hockey table mounted in the rear hatch area and TVs mounted in the front seat headrests wired to a Microsoft XBox360 video game console featuring EA Sports NHL12 video game. 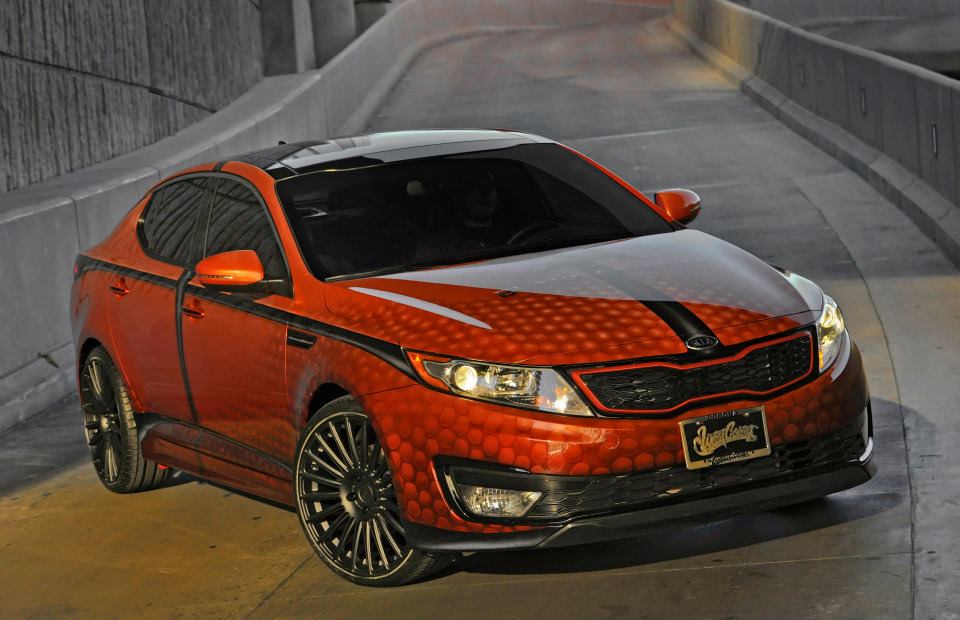 The critically-acclaimed Kia Optima became a pop culture icon when Blake Griffin leaped over the popular midsize sedan to win the All-Star Slam Dunk competition earlier this year. Today, Griffin is an official spokesperson for the Kia brand with several new TV spots set to air over the next few months. Taking the Kia-Blake Griffin partnership to the next level, West Coast Customs has created a basketball-themed Optima Hybrid that adds some hardwood flair to Kia’s first-ever hybrid in the U.S., which delivers class-leading fuel economy of up to 40 miles per gallon on the highway.

The inspiration behind the WCC Optima Hybrid is immediately apparent with its basketball-like custom orange paint scheme, which is accentuated by 20-inch matte black wheels and Griffin’s personal logo on the hood. Inside, hoop fans will find basketball-court flooring in the front and rear seating areas, custom leather seats with Griffin’s autograph embroidered in the front headrests, leather and suede door panel inserts and headliner, and a booming audio system with custom enclosures built into the rear deck lid. Two flat-screen TVs mounted in the back of the front headrests connect to a Microsoft ® X-Box video game console and a “Pop-A-Shot” basketball hoop is mounted in the trunk for hours of off-the-court entertainment. 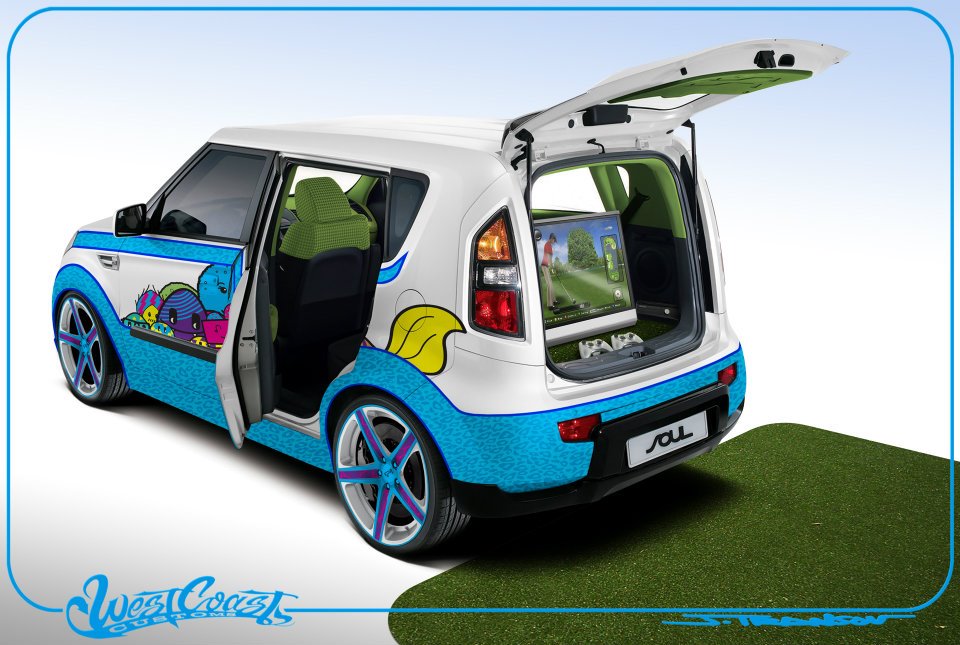 Built by West Coast Customs, the golf-themed “Hole in One” Soul was inspired by Michelle Wie, Kia’s official golf ambassador and one of the most recognizable young athletes around the world. Wie drives a Soul in northern California while attending classes at Stanford University, and this funky Soul’s “So Blue” exterior paint scheme and five-spoke 20-inch wheels incorporate her original artwork, which can also be found on the custom-embroidered Nike® golf bags she uses for tournament play. Adding even more personal style and flair, Wie’s artwork and personal logo also are integrated into the Soul’s “Snow White” leather headrests, while a baby blue painted dash and pink headliner and seating accents complete the whimsical interior look.

Driver and passengers will be instantly transported to the golf course by the artificial grass flooring throughout the Soul, and opening the rear hatch reveals a virtual driving range with a 26-inch LED TV monitor mounted into the rear hatch and a Microsoft® X-Box 360 video game console and Microsoft ® Kinect system to play golf out of the back of the vehicle. Two of Wie’s tournament-used golf bags are mounted behind the TV and conceal eight-inch speakers and a subwoofer.