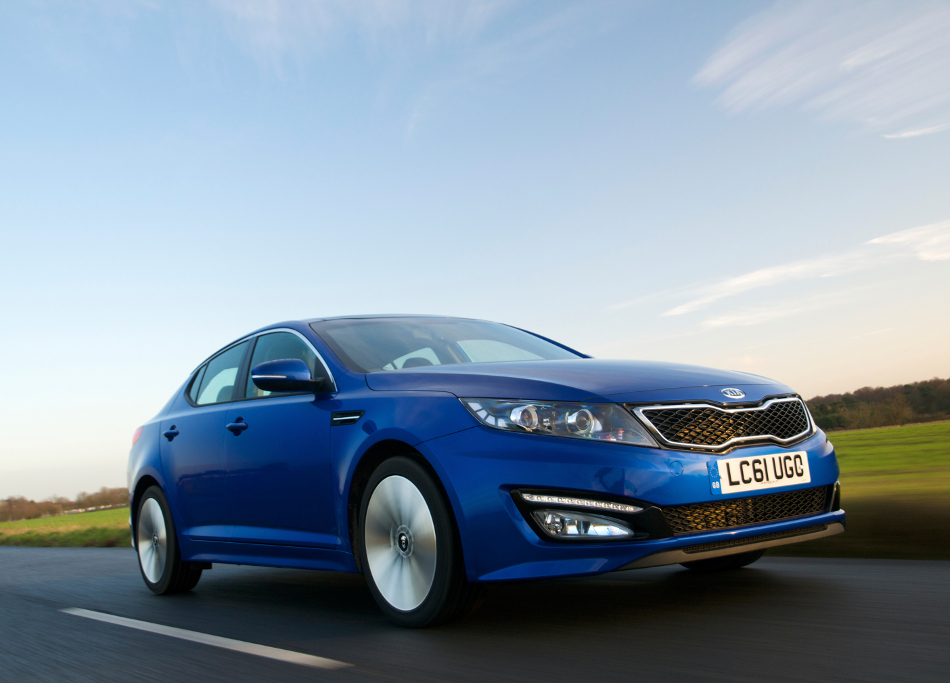 The Kia Optima, the all-new flagship saloon that is the latest model to be launched in Kia’s design-led product offensive, goes on sale in the UK from 1 February bringing fantastic design, high levels of standard specification and low running costs to the D-segment, from just £19,595 on-the-road.

Unveiled back in 2010 at the New York Auto Show, Optima has proven to be a global success since day one. It became Korea’s top-selling car within a month of going on sale – the first Kia ever to reach that exalted position – and is in such demand in the United States that Kia has had to build in Georgia just to keep pace. Nearly 300,000 Optimas have been sold across the world to date and it is already accumulating international design awards.

But the Optima has also been configured to appeal to the business community who make up the vast majority of D-segment customers in the UK. It will be sold only with a diesel engine – a new 134bhp version of Kia’s smooth and efficient 1.7-litre CRDi ‘U2’ power unit – while all four specification options contain every essential for the business user.

The arrival of the Optima means that for the first time Kia has a seriously competitive car in all the key sectors for the UK’s fleet and leasing industry – Picanto, Rio, cee’d and now Optima. Three of those cars are all-new models introduced within the last eight months.

Even before the arrival of the Optima, Kia’s corporate sales were going through the roof – up by 145% between 2010 and 2011, for a market share which improved from 1.58% to 2.42%. With the introduction of the Optima, further progress is confidently expected.

The Optima offers features never previously attainable on a Kia, including a high-end Infinity audio system. It delivers 550W of high-fidelity sound through 12 speakers in eight different locations throughout the car, including a boot-mounted subwoofer. Self-parking, heated and cool-ventilated seats, cornering lights, panoramic sunroof, reverse parking camera and an automatic cabin defogging system are also available, as is a six-speed automatic transmission that is among the most advanced currently produced by any car manufacturer.

A seismic shift in design

Kia’s shift from a purely rational to a design-driven brand in recent years has resulted in a succession of new cars that all deliver the ‘must have’ quality demanded by Chief Design Officer Peter Schreyer. Sorento, Soul, Venga, Sportage, Picanto, Rio… each new model created under Schreyer’s watch has changed the way that buyers perceive Kia.

So, the team behind the look of the Optima knew there had to be an equally seismic shift in the design of Kia’s large saloons, which had hitherto focused on functionality and value. In short, the team had to raise the bar to an even higher level and create a car that people would never previously have expected from Kia.

The Optima was created by Kia’s design teams in Frankfurt and California and immediately began to draw praise from media critics since its global debut in 2010. ‘Gorgeous’ and ‘the best car to come out of Korea yet’ were among the comments made, and these were to be repeated when the Optima made its European debut at the Paris Salon de l’Auto later that year. In 2011 the Optima was named ‘Best of the Best’ in Germany’s Red Dot design competition, which attracted nearly 4,500 product entries from all aspects of life, not just the automotive sector.

The Optima is a clean-sheet design. It is longer, lower and wider than Kia’s previous D-segment car, and has a longer wheelbase and a coupé-like profile, emphasised by its cab-back proportions, shallow glasshouse, short boot and the sweeping chrome arch that flows from the A-pillar to the C-pillar. High, pronounced shoulders flow seamlessly between the sculpted front and rear light clusters, giving the Optima a muscular appearance that is reflected lower down in bold, flared wheel arches.

The interior is youthful and sporty, giving the driver a hands-on, totally engaged feel. The fascia, tilted towards the driver at an angle of almost 10 degrees, has been designed on aircraft principles so that all the major controls are within the driver’s sight-line for best visibility and ease of use.

The entry-level Optima has Kia’s familiar three-cylinder instrumentation, while all other versions have a premium Supervision cluster with a 3.5-inch thin-film transistor (TFT) full-colour information screen flanked by a tachometer on one side and a speedometer on the other. The information screen can be programmed with the driver’s preferred menus and images.

Slender armrests in the doors have integral audio speakers, freeing up more storage space in the panel beneath. In the top-of-the-range Optima 3, mood lighting in the lower part of the doors and the centre fascia adds to the cabin’s already sophisticated ambience.

The Optima is based on an all-new platform which ensures it has class-leading passenger and luggage space and safety features while being no larger than its competitors. The Optima is 45mm longer (4,845mm) and 25mm wider (1,830mm) than Kia’s previous D-segment saloon, but of greater significance is the 75mm increase in wheelbase (2,795mm). Front passengers, in particular, benefit from significantly more legroom, and there has also been a small increase in headroom, despite a 25mm reduction in overall height (1,455mm).

The boot capacity has been enlarged to 505 litres (VDA), and there is a lower lip to make the business of loading the car less strenuous. The 60:40 split folding rear seats allow longer loads to be transported.

And the team which designed the Optima’s interior did not focus solely on aesthetics: useful storage spaces, shaped to accommodate the things which real owners like to carry, abound. There is a cooled glovebox, a centre console box, cupholders front and rear, a sunglasses holder, space for bottles in the front and rear doors, pockets in the backs of the front seats and a centre fascia tray large enough for a mobile telephone, conveniently located adjacent to AUX and USB points.

The Optima is built around an incredibly stiff safety structure featuring almost 60% of high-tensile steel plates. This ensures outstanding front, side and rear impact protection without adding to the car’s overall weight.

There are large disc brakes on all four wheels, ventilated at the front, with anti-lock (ABS), Electronic Brake-force Distribution (EBD) and Brake Assist, giving the car class-leading emergency stopping power in all conditions, regardless of the force applied to the pedal by the driver. Models with automatic transmission feature a foot-operated parking brake.

Kia’s democratic approach to safety is once more evident with the Optima. All versions have Electronic Stability Control (ESC) to counter any tendency of the car to skid out of control because of bad weather or over-exuberant driving. This is linked to Vehicle Stability Management (VSM), which senses when the wheels on one side of the car are on a lower-grip surface than those on the other side, VSM then stabilises the car by reducing the amount of steering assistance if the driver is applying too much steering effort or increasing it if the driver is applying too little.

To alert other motorists to emergency braking, an Emergency Stop Signalling system (ESS) is also fitted. This flashes the brake lights rapidly to warn following drivers. Every Optima is fitted with front, side and curtain airbags, plus active front-seat head restraints to minimise the risk of whiplash injuries.

In the UK, the Kia Optima has been configured to appeal to the business community who make up the vast majority of buyers of D-segment cars. It goes on sale with just one engine – a new 134bhp version of Kia’s acclaimed 1.7-litre U2 turbodiesel – and a choice on the mid and top spec models of a six-speed manual or six-speed automatic transmissions.

All manual versions feature Kia’s EcoDynamics fuel-saving, CO2-reducing measures, including Intelligent Stop & Go and aerodynamic drag-reducing measures, while automatics have an Active ECO button which alters the operation of the engine’s electronic control unit and the compressor on the climate control system, bringing potential fuel savings of around 9%.

The U2 diesel, engineered at Kia’s European research and development centre in Germany, was first introduced on the Kia Sportage, but has been uprated for use in the Optima. It features high-pressure common-rail fuel injection for maximum efficiency and a variable geometry turbocharger to enhance low-speed driveability while ensuring strong top-end power for the high motorway speeds common in Europe. It develops its maximum power at 4,000rpm, but of greater significance is the peak torque of 325Nm (239lb ft) from 2,000-2,500rpm.

The U2 engine in the Optima develops similar power and torque to the 2.0-litre units in European and Japanese rivals, but from a smaller capacity. Acceleration from 0-60mph takes 10.2 seconds in manual versions and 11.5 seconds with automatic transmission, while the respective top speeds are 125mph and 122mph.

The manual can achieve 57.6 miles per gallon, with CO2 emissions of 128g/km, while the figures for the automatic are 47.1mpg and 158g/km. Both attract vastly lower company car taxation rates than any previous Kia D-segment model. In fact, the new car with automatic transmission matches the CO2emissions of the previous manual version.

With automatic transmission, Kia joins an elite group of just three automotive manufacturers to have designed, developed and built its own six-speed automatic gearbox. It features innovative Neutral Control, which shifts the transmission from ‘D’ to ‘N’ when the car has been stopped for a few seconds, reducing the load on the engine and, therefore, fuel consumption.

A gate-type shift pattern offers the driver a choice of two operating modes – fully automatic for town use, or drive for a more involving driving style. In drive, the driver can perform clutch-less sequential manual changes – up or down – via steering column-mounted paddles.

The Optima’s ride and handling have been optimised to provide the perfect combination of stability and agility with refinement and comfort on the long motorway drives that are a fact of life for many business drivers. Kia’s motor-driven power steering (MDPS), which delivers assistance only when needed to reduce the load on the engine and save fuel, offers just the right degree of help and weighting in all circumstances.

Extensive noise-reduction measures ensure minimal transmission of engine and road sound, while the low co-efficient of drag – down to 0.29 from the 0.32 of Kia’s previous D-segment saloon – not only helps fuel economy but also minimises wind turbulence.

The Optima ‘2 Tech’ is equipped with black leather and cloth upholstery, a 12-speaker premium Infinity audio system – including a centre speaker, an external 11-channel amplifier and an eight inch subwoofer – 17-inch alloy wheels and a 7-inch touch-screen satellite navigation system with European mapping and an integrated reversing camera.

As with all Kias, the Optima comes with Kia’s unique seven-year or 100,000-mile warranty, subject to conditions covering wear and tear items. The warranty is fully transferable to subsequent owners.

Care-3, Kia’s servicing package for retail customers, is available for Optima and offers a fixed cost and inflation proof servicing for three or five years. All work will be carried out by trained product technicians, using genuine Kia replacement parts and specified oils.

The UK model line-up and pricing