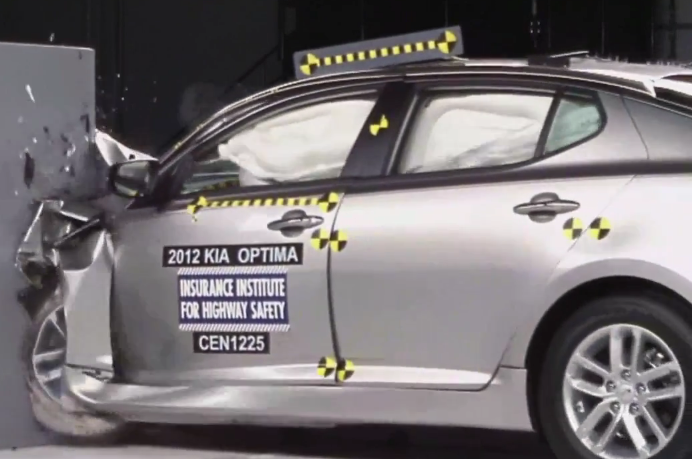 About half of all passenger vehicle occupants killed on U.S. roads die in frontal crashes. Major strides have been made in frontal crash protection, thanks in large part to the crash test program the National Highway Traffic Safety Administration (NHTSA) began in the late 1970s and the crashworthiness evaluations the Institute began in 1995.

When the Institute began its moderate overlap frontal tests, the majority of vehicles were rated poor or marginal. Today, the vast majority of vehicles earn good ratings. Occupant compartments are much stronger than they used to be. They hold up in a crash and allow safety belts and airbags to do their jobs.

In the moderate overlap frontal test, a vehicle travels at 40 mph toward a barrier with a deformable face made of aluminum honeycomb. The barrier face is just over 2 feet tall. A Hybrid III dummy representing an average-size man is positioned in the driver seat. Forty percent of the total width of the vehicle strikes the barrier on the driver side.

The forces in the test are similar to those that would result from a frontal offset crash between two vehicles of the same weight, each going just under 40 mph.

To help drive further improvements in frontal crash protection, the Institute in 2012 introduced a small overlap frontal crash test. The test is designed to replicate what happens when the front corner of a vehicle collides with another vehicle or an object like a tree or utility pole. This crash test is a challenge for some safety belt and airbag designs because occupants move both forward and toward the side of the vehicle.

In the small overlap frontal test, a vehicle travels at 40 mph toward a 5-foot-tall rigid barrier. A Hybrid III dummy representing an average-size man is positioned in the driver seat. Twenty-five percent of the total width of the vehicle strikes the barrier on the driver side.

Small overlap frontal crashes primarily affect a vehicle’s outer edges, which aren’t well protected by the crush-zone structures. Crash forces go directly into the front wheel, suspension system and firewall. It is not uncommon for the wheel to be forced rearward into the footwell, contributing to even more intrusion in the occupant compartment and resulting in serious leg and foot injuries. To provide effective protection in small overlap crashes, the safety cage needs to resist crash forces that aren’t tempered by crush-zone structures. Widening these front-end structures also would help.

Structure/safety cage: To assess a vehicle’s structural performance, engineers measure the amount of intrusion into the occupant compartment after the crash. In the moderate overlap test, measurements are taken at nine places around the driver’s seat. In the small overlap test, 16 locations on the driver side interior and exterior of the vehicle are measured. The amount and pattern of intrusion shows how well the front-end crush zone managed the crash energy and how well the safety cage held up. 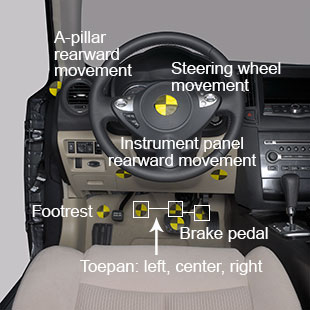 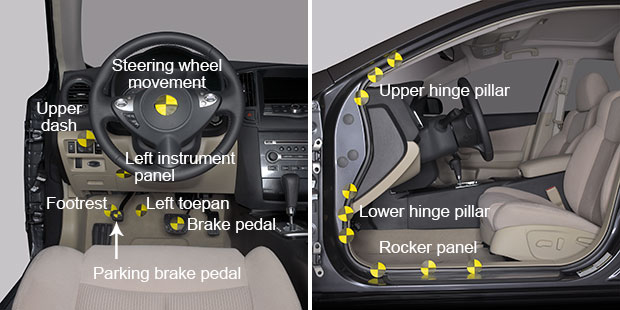 Injury measures: Sensors in the dummy are used to determine the likelihood that a driver would sustain various types of injuries in a similar real-world crash. Measures recorded by sensors in the head, neck, chest, legs and feet of the dummy indicate the level of stress or strain on that part of the body — in other words, the risk of injury.

Restraints/dummy movement: Even if injury measures are low, it’s important to consider the dummy’s movement during the crash, since not all drivers are the same size as the dummy or seated exactly the same way. A close call for the dummy could be an actual injury for a person.

Before each crash test, technicians put grease paint on the dummy’s head, knees and lower legs. After the test, the paint shows what parts of the vehicle came into contact with those parts of the dummy. The paint, combined with high-speed film footage of the crash, allows engineers to evaluate the dummy’s movement. 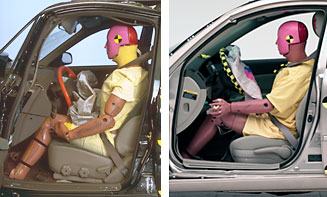 How do vehicles that earn good ratings in the moderate overlap frontal test perform in similar real-world crashes?

Frontal crash test results can’t be used to compare vehicle performance across weight classes. That’s because the kinetic energy involved in the moderate overlap and small overlap frontal tests depends on the speed and weight of the test vehicle. Thus, the crash is more severe for heavier vehicles.

Given equivalent frontal ratings, the heavier of two vehicles usually offers better protection in real-world crashes. In 2009, the Institute demonstrated this principle with a series of tests in which small cars were crashed into larger cars, all of which had good frontal ratings in the moderate overlap test.

For information about how ratings are kept up-to-date from one model year to the next, see the test verification page.

Since the Institute is just starting to evaluate vehicles for protection in small overlap frontal crashes, we don’t have comparable data on how vehicles will fare over time. In the past, automakers have been quick to improve protection whenever the Institute has added an evaluation to its vehicle test program. We expect the same response to the new small overlap test. 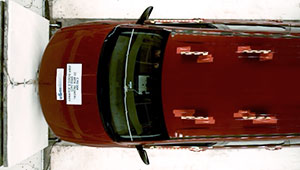 In the New Car Assessment Program (NCAP), passenger vehicles are crashed at 35 mph into a rigid barrier that covers the full width of the vehicle.

The Institute runs offset frontal tests instead of full-width frontal tests. In an offset crash only one side of a vehicle’s front end, not the full width, hits the barrier. As a result, a smaller part of the structure has to manage the crash energy, and intrusion into the occupant compartment is more likely. An offset test is more demanding of a vehicle’s structure than a full-width test, while a full-width test is more demanding of safety belts and airbags. In a full-width test, there is less crushing of the vehicle structure so the decelerations that these restraints must handle are greater. Together, the tests provide a more complete picture of frontal crashworthiness than either test by itself.

NCAP has been extremely successful. Automakers responded by improving their vehicles to earn good ratings, giving them a higher level of frontal crashworthiness than is required by law. By the 1990s, most vehicles were performing well in the full-width frontal test.

In 2010, NHTSA announced an enhanced 5-star rating system that toughened criteria and combined ratings from its different tests into a single rating to provide consumers an overall view of vehicle safety. The NCAP changes apply to 2011 and later models.