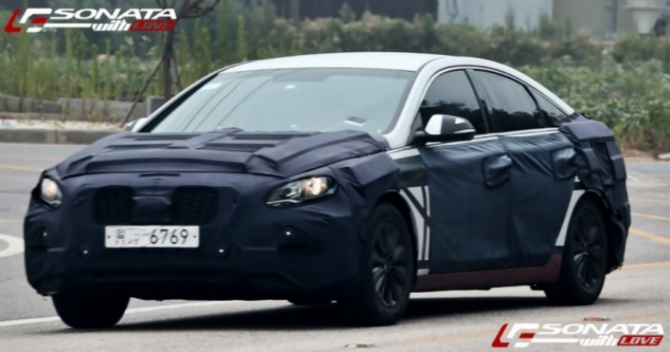 These are the latest spy shots we received from the 2015 Hyundai Sonata (codenamed LF), that was scooped in South Korea, continue testing the updated Hybrid variant of the 2015 Sonata, that was revealed on March 24 in South Korea. [ads id=”0″ style=”float:left;padding:9px;”]The updated Sonata Hybrid variant will change the base powertain, using a more efficient 2.0-liter Atkinson cycle engine (current using a 2.4-liter) and the rumored first-ever Plug-in Hybrid Sonata model will come also.

During the past week, we announced Hyundai-Kia plans to expand the future line-up of eco friendly cars, starting with this Sonata Hybrid, due to release during next month, and the first time ever brands’ Plug-in Hybrid model, scheduled for 2015.

Hyundai & Kia said they will unveil seven new hybrids, plus six new plug-in hybrids during the next five years and will expand hybrid powertrain from compacts to SUVs.

← Prev: Inside Access to the Neotech Facility Kia K900 Sales Not Working in the United States →