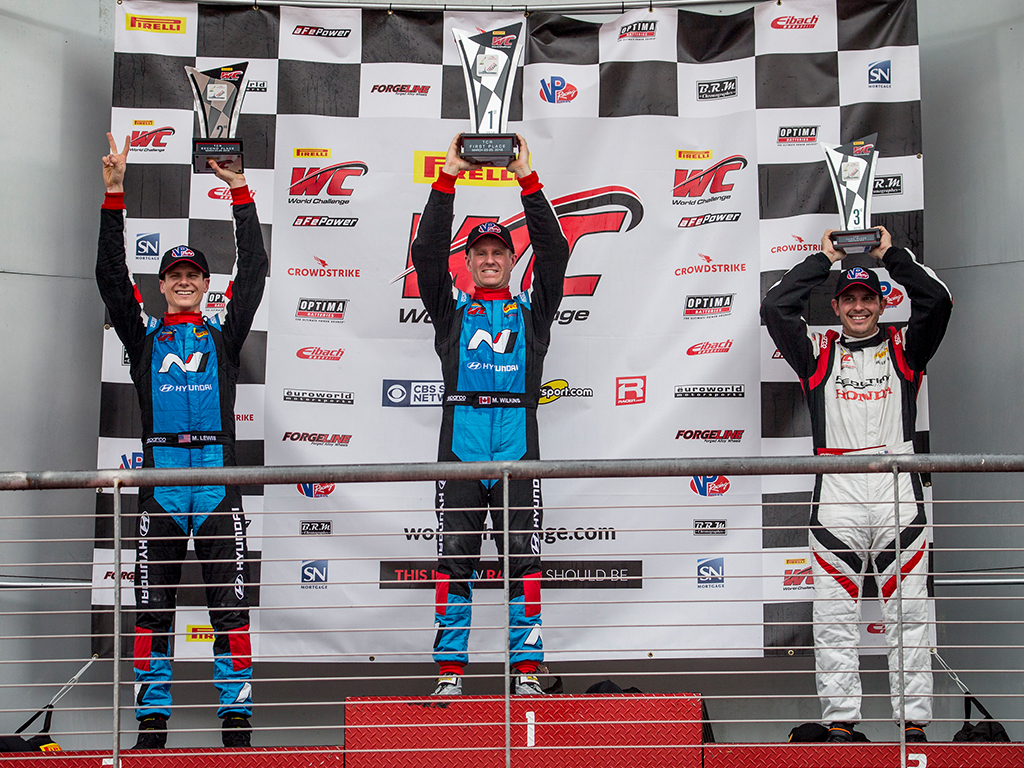 Its been some years since Hyundai has stopped their motorsport program in the USA but this year they are coming back and they did it with the right foot.

Just like the sister company, Kia Motors, Hyundai has decided to participate at the Pirelli World Challenge Race but this time at a new category called Touring Car Racing (TCR) and last weekend was the inaugural race at Circuit Of The Americas (COTA) in Austin, Texas.

Wilkins, driving the No. 99 Bryan Herta Autosport with Curb-Agajanian Hyundai i30 N TCR, scored the first TCR pole position with a time of two minutes, 18.914 seconds (88.91 miles per hour) in another strong performance with a car which hadn’t turned a lap until this past Thursday.

After Wilkins won the pole position earlier Saturday in the No. 99 BHA Hyundai i30 N TCR, Lewis jumped to the lead at the start of the 40-minute sprint race on the 3.427-mile, 20-turn road circuit southeast of Austin.

Lewis, the 27-year-old racer from Newport Beach, Calif., held his ground over his Canadian teammate throughout the 17-lap race with Wilkins making a last lap effort for the lead in turn one before Michael held off the challenge and took the checkered flag by 1.137 seconds.

“It’s a big team effort and want to thank everyone at Bryan Herta Autosport, Hyundai and my teammate Mark,” said Lewis. “Mark got me in qualifying and we had a clean race into turn two. Under braking, he is better than me and he was pushing me. I really appreciate his help in this project. The Hyundai i30 N TCR was solid throughout the race and we need to consider tire life after this race. On the last lap, I saw a lapped car going very slow in a yellow flag area and I couldn’t pass him. Finally, I was able to get by the car and hold off Mark on the final lap for the win. Bryan said to get a clean start and see how the race developed. He wanted us to keep both car up front. We have a lot of Hyundai people here this weekend that made this program possible and I want to thank them for their efforts.”

“Michael did a great job and he had a good start,” said Wilkins, the former PWC GT and GTS race winner from Mulmur, Ont., Canada. “We were side by side in turn one and the track was a little dirty outside of turn two and I didn’t want to press the issue. It was a great 1-2 result for the Hyundai i30 N TCR in its North American debut and we are thrilled with that. It is a start of a great new class and a great product. We did have some issues today with tire degradation and we have been learning every session since we didn’t test before last week. All in all, a great result for the N brand for Hyundai and for Bryan Herta Autosport. And I’ll start from the pole again on Sunday too.”

“My race car arrived later than Michael’s car and we just ran it first time out this past Thursday,” said Wilkins, a race winner in various categories including PWC GT and GTS classes. “The car ran flawless and it was a great first weekend for Hyundai and Bryan Herta Autosport. It’s going to be a very exciting season with many top drivers, teams and TCR cars. It’s always great to win and this weekend seemed like a perfect way to start the year for us. Now, we move to VIR (April 27-29) and hope to continue this trend.”

“For today’s race, Mark got off the starting line well and it is a team effort for me,” said Lewis. “It really didn’t matter if I won or Mark won, and he had a strong Hyundai i30 N TCR this afternoon. Yesterday, I got in a good move to take the lead on the first lap and today, it was Mark’s turn. As long as we are 1-2, that is the goal. Once Mark grabbed the lead, I want to slot in right behind him and protect the 1-2 for Hyundai. Ryan is tough, and I had to watch my mirrors to see where he was. In the end, it was a spectacular debut for the Bryan Herta Autosport team and the Hyundai i30 N TCR at COTA.”

The TCR, TC and TCA classes return to Pirelli World Challenge competition on April 27-29 at the pretty Virginia International Raceway in Danville, Va. The next PWC event will be a GT/GTS event in the streets of Long Beach, Calif., as part of the 44th Toyota Grand Prix of Long Beach on April 13-15.