A few weeks ago, we had spotted the 2018 Kia Sportage facelift on the roads of Germany with a high level of camouflage while Kia will try to recover the sales lost in favor of the Tucson. Also we got a render from Kksstudio, where we can imagine how the refreshed SUV will look, and today we found more pictures that show us for example a new LED tailight stripe. But today and thanks to SB-Medien we have caught the SUV fully undisguised.

A newly designed bumpers, fog lights and headlights have changed Sportage face. The fog light continue using the “ice cube” design, instead Kia has added a side-to-side chromed bar and also the headlight has the new “X-LED” design firm on the headlights like the ones launched on the Forte & Ceed.

At the back of the Sportage is where things gets more interesting, where you will see a complete new design of a bunch of leds lighting up the taillight but compared to the previous model these just go straight and no longer has the 3 lines curved downwards but just like the previous model the brakes will be connected on the middle section, at this time apparently, removing the chrome stripe.

The interior picture didn’t show any differences despite the new touchscreen. Some of Kia’s new safety features will be added as well to keep the Sportage. The facelifted Sportage will be the first Kia model to introduce a 48V mild-hybrid system (and will arrive to the Kia Ceed in 2019), continuing its plan to improve fuel economy and reduce its CO2 print on earth. 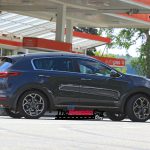 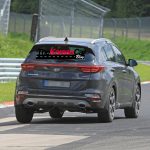 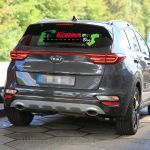 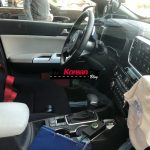 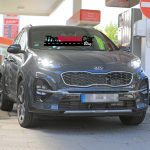