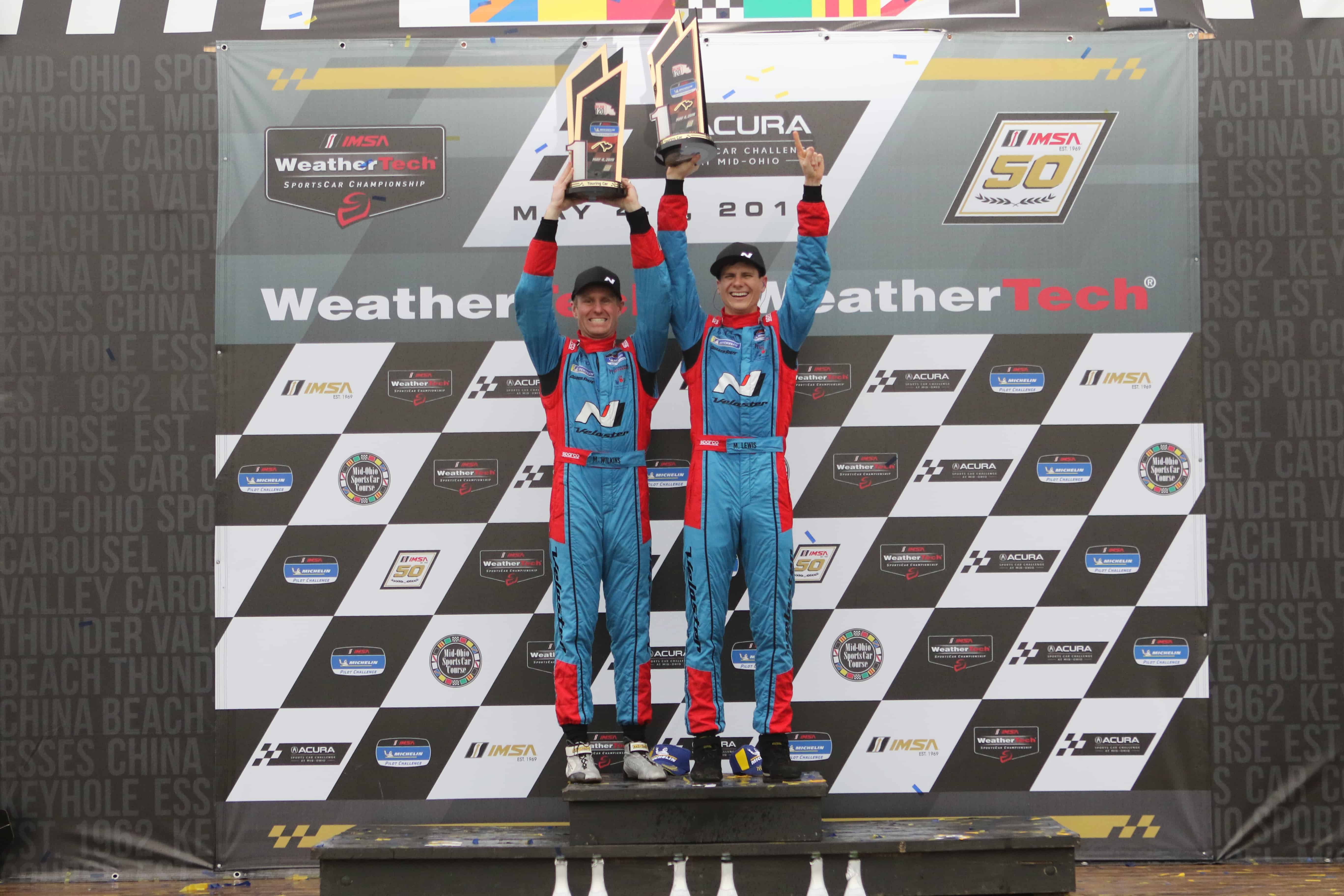 Weather was a factor throughout the weekend and Mother Nature played her hand during the 2-hour race, with cold temperatures and intermittent rain creating challenging decisions in the pit box and on the race track.  The experienced BHA crew’s strategy was the right one, the pitstops were perfect as both cars led the race with the #98 Veloster N TCR of Mark Wilkins and Michael Lewis ultimately taking the checkered flag and securing Hyundai’s first IMSA victory.

We played in the wet today @officialmidohio. The @hyundaiusa #velosterntcr was hooked up all day! Tomorrow we qualify in the morning and race at 1:45 pm est. I’ll start and @mjlracing will finish! Photo: @aaaaaaaandrew

Mark Wilkins qualified 6th in the #98 Veloster N TCR and teammate Mason Filippi 11th.  Both drivers had great starts; Wilkins moved to fourth and Filippi catapulted to sixth on the first lap.  Wilkins drove into the lead before turning the car over to co-driver Michael Lewis just past the half way point of the race. Meanwhile, after vaulting up six positions in the opening laps in the #21 Veloster N TCR, Filippi was racing hard in the top five when contact from a competitor broke the hood pin on the #21 Veloster N TCR, forcing Filippi to the pits for an unscheduled stop.  As Mason pitted for quick repairs the BHA crew were able to keep the car on the lead lap and in contention.  A yellow flag just past the half way point of the two-hour race saw both cars pit for driver changes, fresh tires and full tanks of fuel.  Quick work by the BHA crew enabled the #98 and #21 cars to lead all cars on pit road back out onto the track, with only two cars who had not pitted in front of them.

On the ensuing restart, Michael Lewis and Harry Gottsacker fought their way into first and second.  Gottsacker had just passed his teammate for the lead in the final 20 laps of the race when a fuel pump issue began to slow the #21 machine, dropping him to seventh by the finish.  Lewis continued his battle up front against the strong challenges from Honda and then swapped the top spot twice with the Audi in the closing laps.  The race was a nail-biter until the end as Lewis masterfully made his final pass with only two laps to go.  Lewis defended hard against the charging #81 Audi throughout the final corners to bring home the team and Hyundai’s first ever victory in IMSA competition.

In recognition of the team’s valiant victory, BHA was awarded the “Forgeline Spirit of the Race Award”.  Fans who enjoyed race day coverage via the IMSA.tv live stream and the IMSA Radio live broadcast submitted their votes via Twitter and selected the #98 Bryan Herta Autosport w/Curb Agajanian team for exemplifying the true spirit of MICHELIN Pilot Challenge racing.

“It was a fantastic day today for Hyundai first and foremost. We really had the best car here this weekend.  The Veloster N TCR was perfect on this tight and technical track and in variable conditions. It was a fantastic event overall. We didn’t qualify as well as would have hoped, but sometimes that’s the nature of the beast with timing.  My goal was to work my way forward and turn it over to Michael in a competitive position.  Michael took over and just did a fantastic job. It was a crazy nail-biter but awesome.  The Veloster N TCR performed really well here and it is a very satisfying way to go into the busy part of the season.”

“I am absolutely thrilled to get our first IMSA win and the first for Hyundai here at Mid-Ohio today. It wasn’t easy and it was a great show.  The Bryan Herta Autosport Team executed flawlessly, and we fought hard. Great racing, tough conditions and a fantastic finish.  I have to give credit to my teammate Mark Wilkins…he was so quick and gave me a car in position to win.”

“The start was awesome.  I was in one lane then it was almost like a freeway…I took a second and gave myself a gap and read the traffic, then just took the outside lane and passed about five cars.  The race was competitive and crazy with weather, luckily for most of my stint it stayed dry.   Harry did an amazing job getting to first.  Car was great…. all weekend…this Hyundai Veloster N TCR car is amazing in the mixed conditions….it really gave us an additional edge.”

“We had an eventful race today.  We had the hood come loose and had to serve a black flag to repair it under green flag.  Mason did a great job of getting us back into contention.  I took over in fourth and was able to fight my way to the lead after a restart.  It was really rewarding to lead a few laps for the BHA team.  The conditions were all over the place during my staying and it was changing every lap. Unfortunately, we had an issue with the fuel pump and fell back to seventh at the finish.”

“I am very happy for the team and Hyundai.  At the same time, I’m really gutted for Mason and Harry they had a great race going and I think we had a chance for a 1-2 finish today.  It was our first IMSA win…that’s big.  It was a super exciting race and we’d been saying we thought changeable conditions would favor us and our drivers and that’s what we saw.  Everyone nailed it out there…great job by the crew and the drivers were outstanding.  It was a wild race…maybe a little too wild for me, but I am thrilled with the finish for the #98 car and Hyundai.”