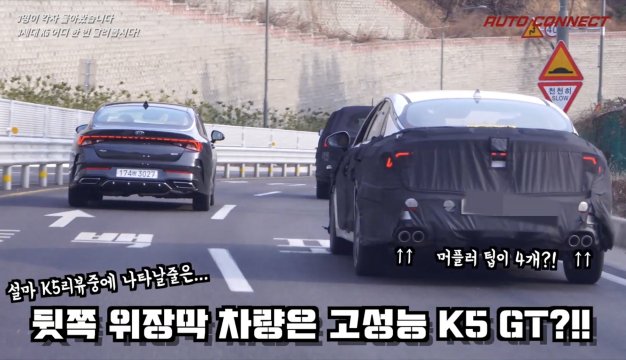 Shares
Today we have new pictures of the next-gen Kia K5, codenamed as JL3, who were caught wearing the top of the range GT trim again in the road in South Korea. What we know so far? You should remember when Albert Biermann have advanced the following information “For the next Optima GT, you can expect an interesting powertrain and suspension at the next level. It’ll be the next level of Kia driving performance.” So let’s find out all the new details. The K5 (as you know, will be called that way around the world) is already launched in South Korea with a more aggresive design, latest technology and safety system, as well as eco technologies like the Solar Roof. But today we will talk about the high aspiration GT trim which were spied in South Korea for the first time, wearing 4 exhaust. If we look what Hyundai did with the Sonata N-Line, we can expect, at least, the completely new Theta3 engine with 2.5-liter displacement Turbo, the new 8-speed Dual Clutch Transmission with AWD option and delivering 290 hp approximately. Unfortunately we can’t see much of the new design due to the heavy camouflage that hides a lot of the front end and back end features but we were told the front has a much aggressive design compare to the “normal” K5. The new Kia K5 on its US-spec will have 2 different engines, all turbo-chargered, and will use 3 different transmissions. A 1.6T will be available with two levels of power while one will have the 8-speed AT and the other will kept the 7-speed Dual Clutch. We expect a debut of the US-spec K5 during NY AutoShow on April, with launch to start in Summer.
← Prev: Hyundai & Kia To Electrify Tucson, Santa Fe, Sorento & Sportage in 2020 Kia Sorento Tailgate Design Leaked →