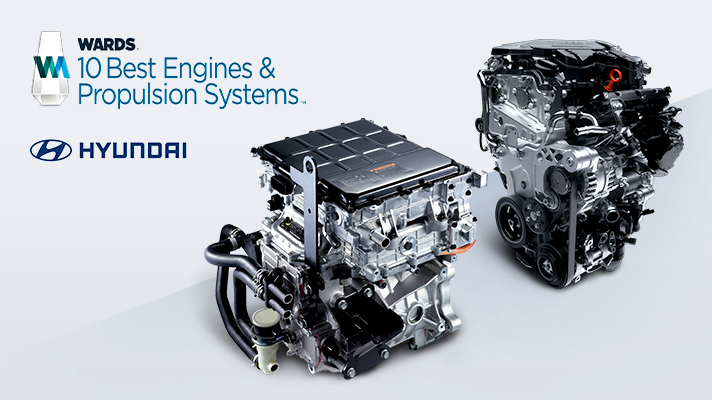 For a second consecutive year in a row, Hyundai earns two out of the ten coveted spots in the 2020 Wards 10 Best Engines and Propulsion Systems competition.

Featured in Hyundai’s all-new Sonata sedan, the new Smartstream 1.6L Turgocharged – GDi engine and a repeat for the 2020 Kona Electric powertrain are named to this year’s list. The recognition highlights the compelling powertrain advancements achieved by sophisticated fuel-efficient architecture and innovative propulsion enhancements. This marks the twelfth time Hyundai has earned Wards 10 Best Engines recognition since the awards’ annual inception in 1995. The Hyundai Kona EV and NEXO Fuel Cell vehicles received awards in 2019.

“We are very pleased to have our newest Smartstream technology, the 1.6L T-GDi engine with our world’s-first Continuously Variable Valve Duration (CVVD) technology recognized to the Wards 10 Best Engines and Propulsion Systems list and a repeat award for the Kona EV powertrain,” said Mike O’Brien, vice president, Product, Corporate and Digital Planning, Hyundai Motor America. “These accolades reinforce Hyundai’s commitment in leading the industry’s most diverse powertrain lineup and we are excited to continue our product onslaught and powertrain innovations with 13 eco-friendly vehicles in the U.S. by 2022.”

Hyundai Motor Group developed the world’s first CVVD technology featured initially in the all-new Sonata. CVVD optimizes both engine performance and fuel efficiency while also being eco-friendly. The valve control technology regulates the duration of valve opening and closing according to driving conditions, achieving a 4 percent boost in performance and a 5 percent improvement in fuel efficiency according to internal Hyundai estimates. Furthermore, the technology reduces emissions by 12 percent.

Pressure-EGR (LP-EGR) is also a key technology for SmartStream G1.6 T-GDi. Is one of. The main function of the EGR system is to recycle some of the exhaust gas to the engine intake to reduce the combustion chamber temperature. The difference is that LP-EGR goes one step further and introduces the exhaust into the front of the turbocharger compressor rather than the intake. This lowers the temperature of the turbocharger and increases efficiency in areas with heavy loads.

An integrated thermal management system (ITMS) has also been added to quickly increase or decrease engine temperature. ITMS optimizes coolant temperature control. For example, you can reduce friction by rapidly increasing engine and transmission oil temperatures when the engine is cold. This can increase engine efficiency.

It is also noticeable that the fuel injection pressure is increased from 250 bar to 350 bar compared to the existing Hyundai turbo engine, improving response and combustion efficiency. In addition, the friction reduction engine moving system (FOMS: Friction-Optimized Moving System), which minimizes friction throughout the engine, was added to reduce mechanical friction by 34%. Reduced friction naturally improves fuel economy and engine responsiveness.

CVVD takes technology in a new direction by adjusting how long a valve is open. Until now, an internal combustion engine’s performance and efficiency have been governed by variable valve control technology that adjusts the timing of valve opening and closing and depth of the valve’s opening, with engine power produced through the fuel intake-compression-expansion-exhaustion cycle.

When the vehicle is maintaining a constant speed and requires low engine output, CVVD opens the intake valve from the middle to end of the compression stroke. This helps to improve fuel efficiency by reducing the resistance caused by compression. On the other hand, when engine output is high, such as when the car is driving at a high speed, the intake valve is closed at the beginning of the compression stroke to maximize the amount of air used for combustion, enhancing torque to improve acceleration.

Typical variable valve control technologies manage the timing of the valve’s opening and closing (as in Continuously Variable Valve Timing – CVVT) or control the volume of air admitted by adjusting the depth of the opening (Continuously Variable Valve Lift – CVVL). Previous variable valve control technologies could not regulate valve duration.

According to Tom Murphy, managing editor at Wards, “Appearing first in the all-new Sonata sedan, this clean-sheet 4-cyl., is part of a family of new Hyundai engines. It’s an absolute gem – stout, refined, punchy, a delightful daily driver and it’s the world’s first application of continuously variable valve duration.” He further added, “It’s constantly altering how much air enters the combustion chamber based on throttle inputs and driving conditions.

Hyundai’s system actually has VVT and CVVD working in tandem, allowing intake valves to remain open for shorter or longer spans, independent of whether they open early or late.”

According to Christie Schweinsberg, Wards editor, “As we noted last year for its inaugural win, the Kona’s robust Li-ion pack, liquid-cooled and operating at 356V, enables relatively long-distance travel similar to an ICE-powered vehicle and lessening the need to stop and charge. For instance, one can travel from San Diego to Santa Barbara in a Kona Electric (218 miles [315 km]) on its EPA-estimated range, so long as accelerator inputs – and use of the HVAC system – are somewhat restrained.”

She further commented, “Despite all the luxury BEV newcomers in 2019, the mass-market Kona still has one of the longest-range lithium-ion battery packs in the industry.”

The Kona Electric powertrain employs a high-efficiency 150 kW (201 horsepower) permanent-magnet synchronous electric motor supplied by a high-voltage 64 kWh lithium-ion battery. The motor develops 291 lb. ft. of torque distributed to the front wheels. The powertrain inverter has a power density of 25.4 kVA per liter. The battery system is liquid cooled and operates at 356 volts. Battery pack energy density is 141.3 Wh/kg (greater than Chevy Bolt), with a total battery system weight under 1,000 lbs. In addition, Kona Electric EPA estimated MPGe is 132 city, 108 highway, and 120 combined.

This is the 26th year for Wards 10 Best Engines and Propulsion Systems, a competition created to recognize outstanding powertrain achievement, world-class technologies and those rare engines or electric propulsion systems that are so compelling that they help sell the vehicle. This year, 26 entries were competing for the prestigious recognition and were chosen from 2019 and 2020 model year vehicles. To be eligible, a new or significantly modified engine or propulsion system must be on sale in a production vehicle during the first quarter of 2020, with a base price capped at $64,000.