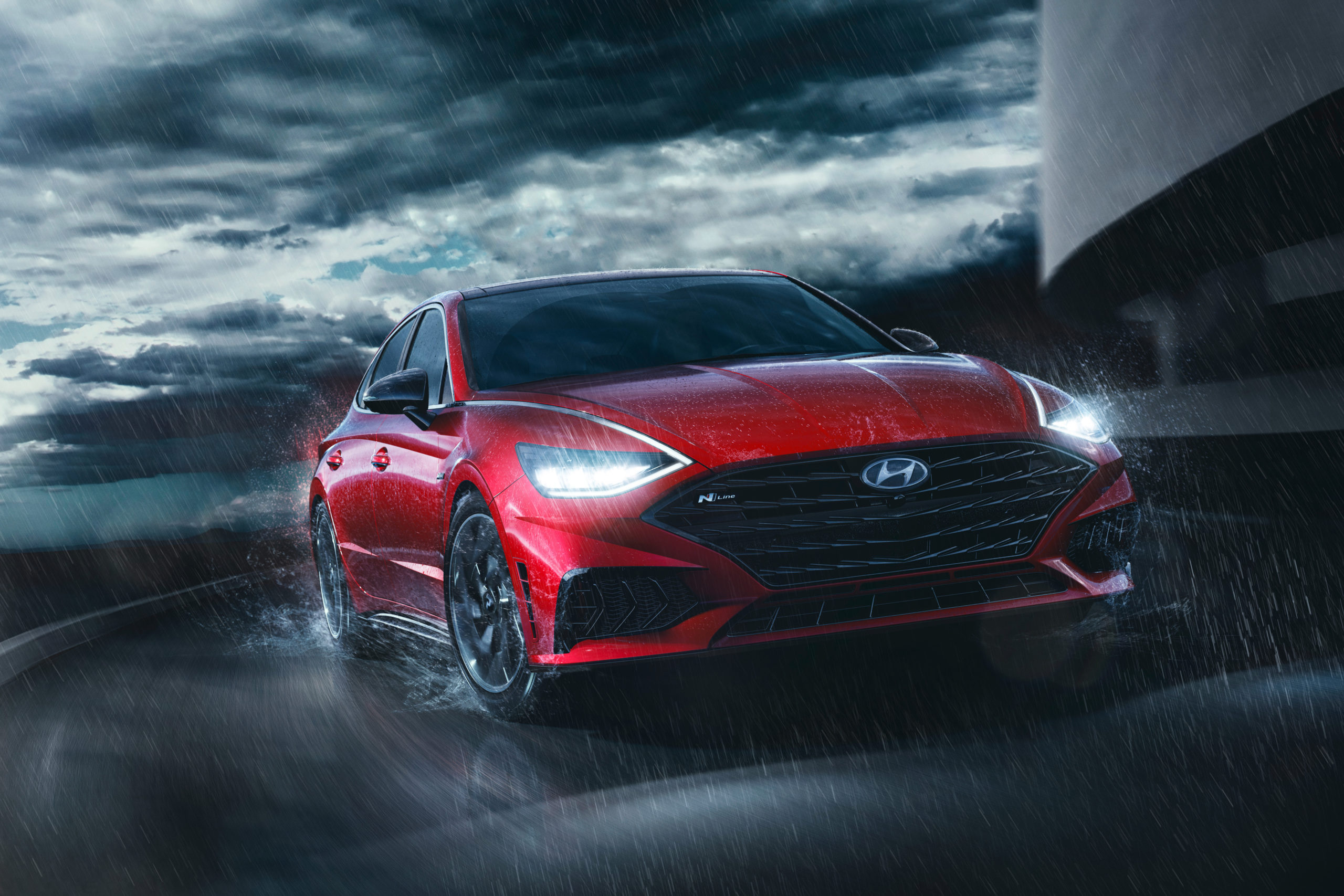 Hyundai officially showed off the Sonata N Line for the first time ever today in Seoul. Powertrains were not announced but we expect the US market to receive the 2.5 liter turbocharged four cylinder engine with 290hp and 311 lb-ft torque to match the Kia K5 GT. There’s no sign that this variant of the Sonata would receive AWD.

The Sonata N Line features a notably sportier design compared to other members of the Sonata family, with a unique grille that has more intricate detailing and cascades down to three sport-inspired air slots in the lower front bumper. The N Line front bumper ends up providing a smaller upper grille but a larger lower air intake than the standard Sonata, with bigger side air intakes to match the sporty appearance.

All Sonatas have an appearance of sitting low to the ground for this generation, and the sportier side skirts on the Sonata N Line accentuate this character of the sedan with a deep cut that gives an effect of the car leaning into its haunches. The Sonata N Line also gets unique 19 inch machined alloy wheels which appear a little busy for the otherwise simple profile of the car.

For the interior of the Sonata N Line, Hyundai has opted for a light gray with bright red piping and stitching throughout. The well-bolstered sport seats are a cloth/leatherette combination that features the N logo on the seatbacks. The cabin is finished in dark chrome trim to further differentiate it from lesser Sonata models. The N logo also appears at the base of the steering wheel, which is a traditional circular wheel rather than the D-cut wheel found in the K5 GT. The gearshift in the Sonata N Line is the same drive-by-wire push-button unit from other Sonatas, although another N badge is tacked on below the gearshift mechanism. Paddle shifters are retained from higher spec Sonatas in the new N Line.

From a technology perspective, the Sonata N Line does not appear to bring much new to the table, but does appear to offer all the amenities of a fully loaded Sonata, with a panoramic sunroof, digital gauge cluster, a 10.25” touchscreen infotainment head unit with navigation, smart cruise control, and much more.

While the car was unveiled in Korea, we noticed that the press photos were taken in California, implying that the car seen in these photos is the US spec Sonata N Line. That means that we’re likely to get the full suite of goodies which were denied to us in the Sonata N Line’s corporate cousin, the Kia K5 GT.

The car should go on sale next year, and we’ll bring you powertrain details when we know them.