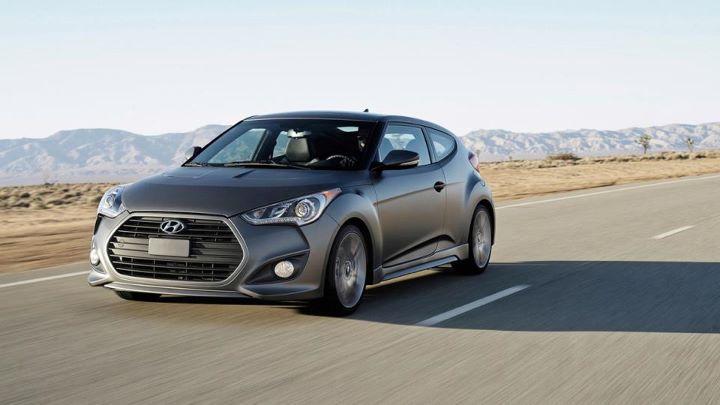 Updated again with new information, pictures and a video.

Thanks to our Facebook’s follower Jason Salvatore, today we can show the first official pictures of the 2013 Hyundai Veloster Turbo. Hit the jump to see three first pictures!

The 2013 Veloster Turbo arrives in the Summer of 2012, facing off against worthy competitors such as the Volkswagen GTI, Honda Civic Si and Mini Cooper/Clubman S with a better power-to-weight ratio than all of them, and a unique sport-tuned steering and suspension hardware set.

TWIN-SCROLL TURBOCHARGER AND GDI TECHNOLOGY
The 1.6-liter turbocharged GDI four-cylinder engine in the 2013 Veloster Turbo produces 201 horsepower at 6000 rpm and 195 lb-ft of torque from 1750 – 4500 rpm with regular fuel. The Veloster Turbo is estimated to deliver 27 mpg city and best-in-class 38 mpg highway for manual transmission models. Hyundai’s 1.6-liter Gamma turbocharged engine features a twin-scroll turbocharger that when combined with the GDI system, results in instantaneous power delivery. Twin-scroll turbochargers have traditionally been used on more expensive high performance engines, but Hyundai has brought this technology down its line-up from the Sonata 2.0T.

The result of this superior scavenging effect from a twin-scroll design leads to better pressure distribution in the exhaust ports and a more efficient delivery of exhaust gas energy to the turbocharger’s turbine. This in turn allows greater valve overlap, resulting in an improved quality and quantity of the air charge entering each cylinder. In fact, with more valve overlap, the scavenging effect of the exhaust flow can literally draw more air in on the intake side. At the same time, drawing out the last of the low-pressure exhaust gases help pack each cylinder with a denser and purer air charge. Maximum boost from the turbocharger is 18 psi.

Thanks to the integrated stainless-steel turbine housing with the exhaust manifold, not only is the weight and cost of the casting dramatically reduced, the durability of the turbine housing is also improved. In addition, heat energy recovery and thus turbo efficiency is significantly improved based on the fact that a traditional two-piece design effectively insulates some of the heat energy at the joint/gasket area.

By adapting the motor-driven electrical waste-gate, the boost pressure is precisely controlled. The back pressure is reduced when turbo boost is not necessary by opening the waste-gate, which improves fuel efficiency. During cold starts, the waste-gate remains open, which results in faster catalyst light-off for reduced exhaust emissions.

A GDI fuel delivery system contributes to improved fuel efficiency and lower emissions. This shorter, more direct path of fuel delivery allows for greater control of the fuel mixture at the optimum moment, thus improving efficiency. The fuel is injected by a camshaft-driven, high pressure pump that operates at pressures up to 2175 psi. Direct injection also utilizes a higher-than-normal 9.5 compression ratio, while achieving a best-in-class 125.6 horsepower-per-liter. The piston heads are “dished” to increase combustion efficiency in the cylinder.

CUSTOM TWO-WHEEL TUNER INSPIRATION
Veloster Turbo’s unique design takes inspiration from a custom high-performance sport bike. One of the most popular sport bike upgrades is to modify the exhaust. Hyundai designers have removed the Veloster’s trapezoidal center exhaust and replaced it with two larger free flowing circular pipes. These new pipes and the new intake manifold also allowed engineers to give the engine a more robust sound, which will delight enthusiasts.

SPORT-TUNED
Working in harmony with the aggressive appearance is the finely tuned suspension setup of the Veloster. Only key components in the steering were upgraded for the Veloster Turbo. Veloster Turbo features a quicker ratio steering rack and a revised steering calibration to match, which both give drivers precise cornering, feedback and control. All Veloster Turbo’s ride on Kumho Solus KH25 215/40R18 85V tires designed to extract the best performance out of the car without compromising the ride.

NEW INTERIOR FEATURES
Inside, full leather seats with the word “Turbo” stitched into the seatbacks help deliver a unique look and provide exceptional support and comfort. An exclusive Supervision Cluster offers the driver information in a larger, clearer and more interactive format. This is due to the Supervision Cluster’s two TFT screens located between the tachometer and the speedometer. Heated front seats are also standard on the Turbo version. The center stack and controls also resemble a sport bike fuel tank and incorporate a push-button starter and alloy pedals.

SIX-SPEED MANUAL OR AUTOMATIC
To handle the power enhancements and keep with Hyundai’s commitment to making fuel efficient vehicles, Veloster Turbo is paired with a standard six-speed manual transmission or a six-speed automatic transmission. Both transmissions were developed in house at Hyundai. The manual features a wider gear ratio spread (5.71 vs. 5.25) to handle the additional torque output. The high-revving turbo helps during acceleration, especially at highway speeds.
The Veloster Turbo is mated to a six-speed automatic transmission with steering wheel-mounted paddle-shifter and and Shiftronic® controls rather than the base Vesloster’s EcoShift DCT. This is due to the increased torque output from the 1.6-liter Turbocharged-GDI engine. The gear ratio spread on the automatic transmission is slightly narrower than the DCT (6.0 vs. 6.38). A narrower spread maintains the engine in the power band when going from one gear to the other. The base Veloster’s EcoShift DCT is tuned for fuel efficiency and not for the performance feel needed for the Veloster Turbo.

WORLD-CLASS WEIGHT EFFICIENCY
World-class weight efficiency is a program target for all Hyundai models. This strategy delivers outstanding fuel economy and performance simultaneously. At just 2,800 pounds, Veloster is 77 pounds lighter than the Honda Civic Si Coupe and 234 pounds lighter than the Volkswagen GTI. This priority on weight efficiency allows the Veloster Turbo to deliver a great combination of agility, performance, and fuel efficiency.

VSM works to control two effects. The first is when a driver accelerates or brakes on a split-mu surface (slippery on one side, dry pavement on the other) and the vehicle wants to pull in one direction. VSM detects this condition and sends a signal to the MDPS to apply steering assist. VSM counters the pull and automatically provides up to eight Newton meters of counter steering. VSM reacts the same way during sudden lane changes or fast cornering.
All Velosters feature six airbags-including dual front, front seat-mounted side-impact, and front and rear side curtain airbags.

CONNECTIVITY/TECHNOLOGY
In the digital age, everyone wants to be connected to their electronics at all times, so Velosters come standard with a multifunction seven-inch touch-screen display. At engine start-up, the screen comes to life with a Veloster image and a unique sound. There are three interface layouts the user can choose from.

Pandora internet radio is integrated into all Velosters. The display screen has a Pandora icon to stream internet radio from an iPhone or Android. Pandora can also be viewed on the display screen and songs can be given the familiar Pandora thumbs up or thumbs down. (By selecting the thumbs down icon, that particular song will never be played again.)

• Pandora, the leading internet radio service, gives people music they love anytime, anywhere, through personalized radio stations available on a wide variety of connected devices.
• According to Nielsen, today Pandora is one of the top five most popular apps across all smartphone platforms.
• Pandora gives people music they love through personalized radio stations, created instantly from a single song, artist or composer “seed.”
• Today, tens of millions of people have a deeply personal connection with Pandora, based on the delight of personalized radio listening and discovery.
• Pandora currently has more than 65 million listeners throughout the United States.

Gracenote improves how Veloster drivers access and manage their music, using enhanced voice recognition commands in concert with your iPod®. Gracenote MediaVOCS® technology improves the accuracy of the system’s voice recognition capabilities for music search, letting drivers pinpoint artists, album and genre. For instance, Gracenote MediaVOCS® helps the system understand artist names like Beyoncé and AC/DC. Drivers can also use “The Boss” as a voice command to access tracks from Bruce Springsteen. In addition, the song’s album cover art displays on Veloster’s touchscreen.

With video games being an important element of entertainment, Hyundai integrated an RCA cable and an available 115-volt power outlet in Veloster to support gaming consoles for ultimate gaming sessions when parked or watch videos on the seven-inch multimedia touchscreen.

COLOR PALETTE
Veloster Turbo’s aggressive personality means it can be dressed in an exclusive Matte Gray, a Hyundai first. All 2013 Velosters will be available in colors that fit the cars “own-it” attitude and characteristics of a long-distance runner, including Elite White. Interior color choices are Graphite Black or exclusive to the Turbo Graphite Black with Blue accents and headliner graphics for non-panoramic sunroof models.