2012 Geneva Autoshow: All details about the next Kia cee'd. 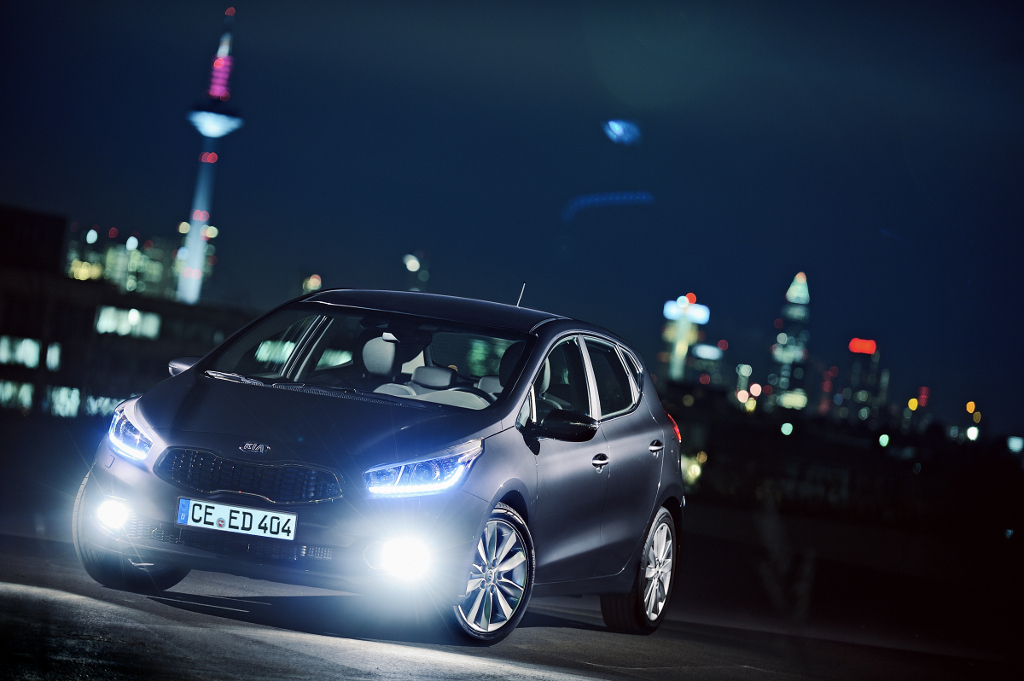 Making its global premiere at the 2012 Geneva International Motor Show is the all-new Kia cee’d. More sophisticated, more efficient, more refined and with a more engaging driving experience than its predecessor, new cee’d is expected to build on the success of the original model, further establishing Kia as one of the leading automotive brands in Europe.

Launched in 2007, the original cee’d was a landmark and game-changing model for Kia. Designed, developed and built in Europe, cee’d was the first model to establish Kia as a serious contender to the established brands. Winning praise from media and public alike for its all-round ownership proposition, cee’d claimed fourth place in the European Car of the Year Awards that year – the highest ever ranking for a Kia vehicle.

“The original cee’d was a paradigm shift for Kia, taking the company into the hotly contested C-segment with a truly competitive car for the first time,” comments Paul Philpott, Chief Operating Officer, Kia Motors Europe. Just as the original cee’d represented a major step forward for Kia in 2007, this second-generation model represents a further leap for the brand – both in terms of the capability and sophistication of the vehicle, and what it will do to drive further momentum in our European sales.

Since launch, the cee’d family has recorded over 430,000 sales in Western Europe, changing the public perception of our brand and laying the foundations for a series of new Kia models across a broad spread of market sectors.

“The remarkable success of our newest models, Picanto, Rio, Soul, Venga, Sportage and Sorento, owes much to the impact made by the original cee’d and the innovative seven year Kia warranty we introduced with that model,” Philpott concludes.

New cee’d five-door goes on sale across Europe from the second quarter of 2012, depending on market, and will play a significant role in driving Kia’s sales in Europe even higher. Further information about other models in the new cee’d family – including the SW version displayed at Geneva – will be made available later this year. 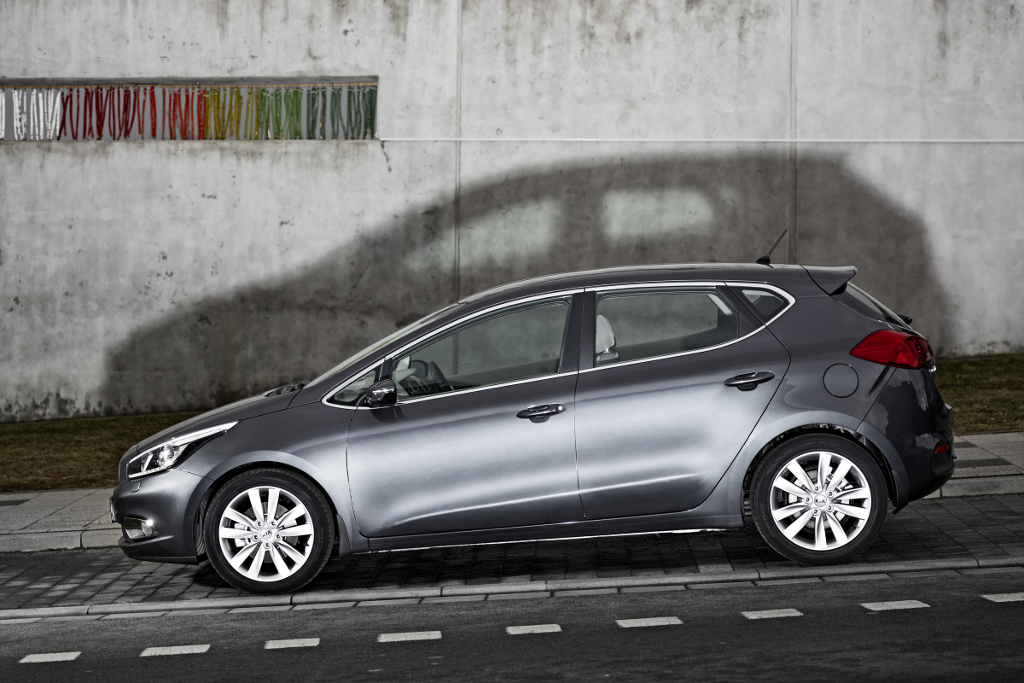 New cee’d is both longer and lower than its predecessor, giving the five-door hatchback a more sporty profile. Overall length is increased by 50 mm (to 4,310 mm) and overall height has been reduced by 10 mm (to 1,470 mm) by lowering the ride height. Despite being based on a completely new platform, new cee’d carries over the 2,650 mm wheelbase, one of the longest in the C-segment, from its predecessor.

This more athletic appearance is further enhanced by a wider track. While the overall bodyshell is 10 mm narrower, the front and rear track have been increased (by 17 mm and 32 mm, respectively). The impact on the car’s aesthetics is heightened by the availability of 17- and 18-inch diameter alloy wheels, resulting in a minimal gap between tyres and bodywork.

The new model’s sleek silhouette was shaped by extensive testing in the state-of-the-art wind tunnel at Kia’s R&D centre at Namyang, Korea. A reduced windscreen angle, smooth covers beneath the engine bay and the central floor, a rear spoiler above the tailgate and carefully profiled rear lamp clusters all help new cee’d achieve a Cd figure of just 0.30, placing it among the best-in-class, and helping to reduce fuel consumption and cabin noise.

New cee’d will be manufactured exclusively at Kia’s Zilina facility in Slovakia in a range of 10 exterior colours – including five new – and will be among the first models to bear the new-look Kia badge on its bonnet. Simpler, sleeker and with a more modern appearance, the new badge design echoes the premium feel of new cee’d and incorporates the Kia script in a single raised section for greater legibility. 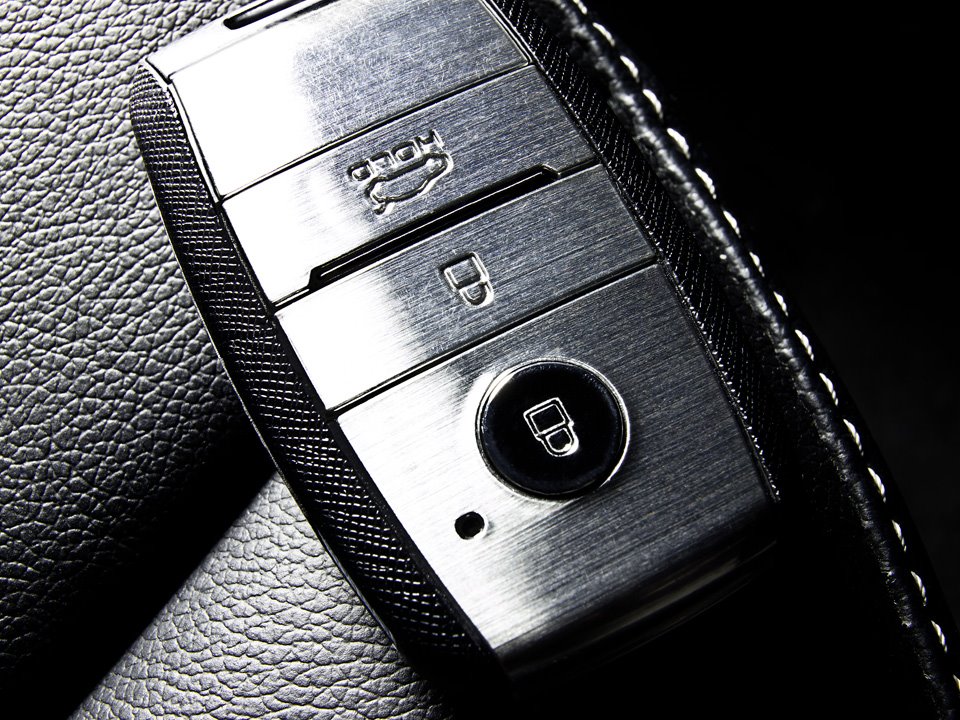 In developing new cee’d, Kia’s engineers had a strong focus on reducing fuel consumption and emissions without sacrificing engine response or power output. Updated engines and various small but impactful changes have resulted in an average fuel consumption improvement of four per cent across the model range.

Depending on individual market preferences, the new cee’d will be available with a wide choice of engines offering power outputs from 90 to 135 ps. Across most of Western Europe there will be two petrol engines – a 1.4 MPi and a 1.6 GDi producing 100 and 135 ps respectively – plus two diesels – a 1.4 WGT with an output of 90 ps and 1.6 VGT diesel CRDi offered in two states of tune (110 and 128 ps). Certain markets in Europe will also offer a 1.6 MPI petrol unit producing 130 ps.

Kia anticipates that its top of the range diesel – the highly-efficient 1.6-litre variable geometry turbo unit – will be the most popular choice in most markets. Generating 128 ps and 260 Nm, the engine will be offered with a choice of six-speed manual or automatic transmissions and will accelerate the new cee’d to 100 kph in less than 11 seconds. Fuel consumption will be just 4.1 l/100 km on the combined cycle (3.7 l/100 km in cars fitted with Kia’s EcoDynamics technologies), and CO2 emissions start at just 97 g/km.

The ‘Gamma’ petrol engines also offer an excellent balance between performance and economy. The most powerful, the 1.6-litre Gamma GDi engine introduced in the Kia Sportage, features direct injection to maximise power (135 ps) and torque (165 Nm) while minimising fuel consumption and emissions. With this engine, new cee’d will accelerate to 100 kph in 9.9 seconds while delivering fuel consumption of 5.8 l/100 km (5.2 l/100 km with EcoDynamics), and tailpipe CO2 emissions from 119 g/km.

All engines will be offered with a choice of manual or automatic six-speed transmissions. Depending on version, the 1.6 GDI will also be available with Kia’s all-new six-speed Dual Clutch Transmission (DCT), which improves fuel efficiency and delivers smooth automatic gear shifts for maximum comfort.

Developed by Kia’s in-house transmission development team in partnership with a German-based engineering firm, the DCT makes the Korean brand one of a very small number of car makers in the world to produce its own dual-clutch transmission.

The DCT combines two manual transmissions within a single housing, each with its own dry clutch. One transmission shaft is dedicated to 2nd, 4th, 6th and reverse gear, while the other operates with 1st, 3rd and 5th gears.

Working in parallel, one shaft prepares to engage the next ratio, while the other is still engaged with a gear. Electric motor-driven actuators controlled by the Transmission Control Unit (TCU) execute gear selection and clutch engagement, resulting in swift and precise gear changes and uninterrupted torque transfer to the driven wheels, with a minimum of the efficiency loss normally associated with conventional automatics (with a torque converter).

As with other Kia models in Europe, new cee’d will be available with fuel-saving technologies developed under the company’s EcoDynamicsTM sub-brand to optimise efficiency and lower emissions. These technologies, which will be available on both diesel and petrol models with manual transmission, include ISG (Start/Stop), low-rolling resistance tyres and an alternator management system (AMS).

Ride and handling for new cee’d was benchmarked against class-leading competitor vehicles from near-premium brands.

Fully-independent, subframe-mounted suspension with MacPherson struts at the front and a multi-link set-up at the rear exploit the newcomer’s wider track to deliver improved handling and road-holding.

The hugely increased torsional rigidity of the new cee’d bodyshell (45 per cent stiffer than the original model), has also enabled Kia‘s engineers to introduce numerous small changes to components, springs and shock absorbers that influence ride quality, refinement and NVH.

Improvements to the front suspension include an increased castor angle (from 4.4 to 5.2 degrees) for greater straight-line stability, larger wheel bearings in a reinforced hub, and larger diameter bushes for the subframe attachments. At the rear, geometry changes ensure more accurate tracking, the trailing arms have larger bushes and friction has been reduced throughout the system.

The standard steering system employs electric power-assistance and requires 2.85 turns lock-to-lock for a 10.34-metre turning circle. New cee’d is also available, on certain models, with an all-new Flex Steer system for improved driving dynamics. This system introduces three operating modes – comfort, normal and sport – allowing the driver to vary the level of steering assistance and the weight of feedback, in order to best suit the current driving conditions and the driver’s personal preferences. 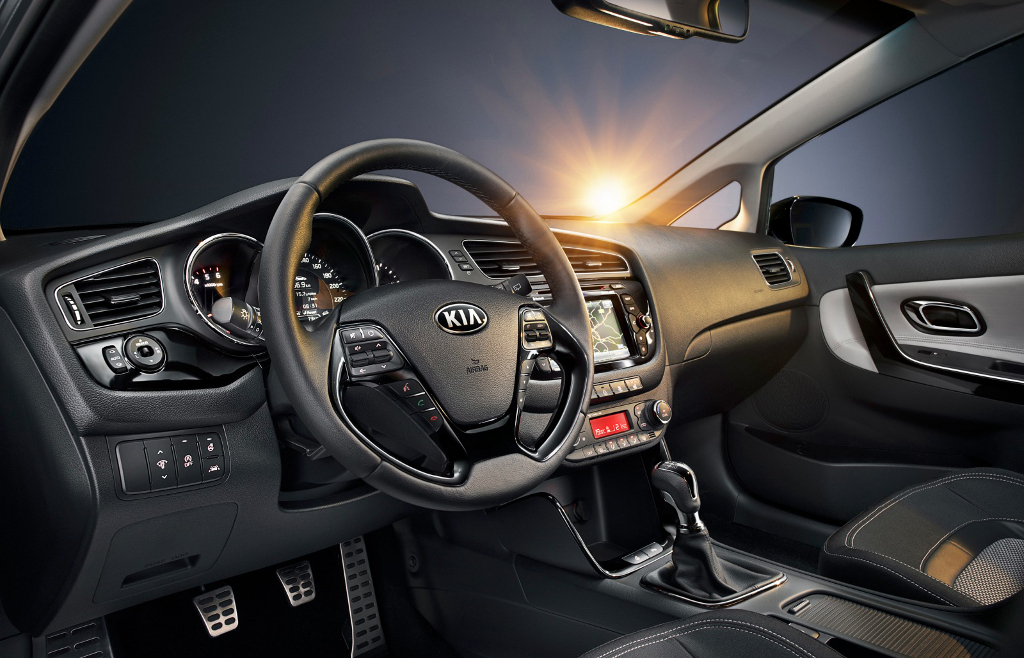 Kia’s engineering team was determined to achieve significant improvements over the previous model in terms of cabin refinement and NVH. Measures adopted include fitting 14 per cent thicker front door window glass, low-drag exterior mirror housings, new vibration-damping engine mounts, hollow drive shafts, stronger bodyshell joints between the sills and B-pillars, double-layer door seals, and increased foam-filling in the A-, B- and C-pillars. As a result of these measures, cabin noise levels have been cut to match class-best standards.

Although the 2,650 mm wheelbase is carried over for new cee’d, the increase in overall length contributes to more interior space for people and cargo. Front seat occupants have 12 mm more headroom and 21 mm more legroom, while rear passengers gain 5 mm of shoulder room. Cargo capacity is boosted by 12 per cent to 380 litres (up 40 litres) with the rear seats upright and the split-folding rear seats can be made fully flat for maximum versatility.

Higher quality cabin materials and a broader range of high-tech equipment will ensure the interior of new cee’d matches the premium exterior appearance.

Primary and secondary controls are grouped in a driver-oriented layout for intuitive ease of use, while new standard equipment will include tilt and telescopic steering wheel adjustment, iPod, Aux and USB support, six speaker audio system and a multi-mode trip computer.

A choice of bright chrome, piano black and anodized metal trim accents will be offered, while indirect LED lighting of the centre console and sweeping ‘vertical fin’ door handles establish an upmarket ambience for the cabin. The seat and cabin trim will be available in a choice of two colours as standard – black one-tone and stone beige two-tone – in cloth, with a full leather interior available on high specification versions.

New cee’d will be available, depending on version, with LED daytime running lights, fixed cornering lamps (illuminated depending on steering angle), and advanced HID headlamps that turn the low beam to match curves in the road and enhance the driver’s night vision.

Parking can be made easier with the new Parallel Park Assist System (PPAS). This features front, side and rear sensors and automatic steering control by an on-board computer to safely perform parallel parking. The driver remains in control of the accelerator and brake.

Kia continues to make safety a top priority and the new cee’d features advanced active and passive safety technologies to ensure maximum protection for its occupants and other road users. Kia is determined to achieve the maximum rating when tested by EuroNCAP with this new model.

In terms of passive safety, the bodyshell is constructed using a high percentage (57 per cent) of ultra high-tensile steel and features numerous improvements to enhance impact resistance. New transverse cross-members are fitted to link the front and rear suspension mounts, new pressings link the rear trunk floor to the tailgate opening and the rear roof rail is connected to the C-pillars and a new floor cross-member to create an extremely strong ‘safety ring’.

Side impact protection is enhanced with 50 per cent thicker door beams, plus a stronger roof cross-member between the B-pillars and side sills made from ultra high-tensile steel.

Each new cee’d is fitted with six airbags as standard – front, front side and full length curtain. Pedestrian safety is improved with the adoption of collapsible headlamps, a stiffer lower bumper lip, and shock-absorbing structures in the hood and its hinges.

Five-door, five-seater hatchback, with all-steel unitary construction bodyshell. Choice of up to five transversely mounted diesel and petrol engines driving the front wheels via a six-speed manual or automatic transmission – depending on model and market. 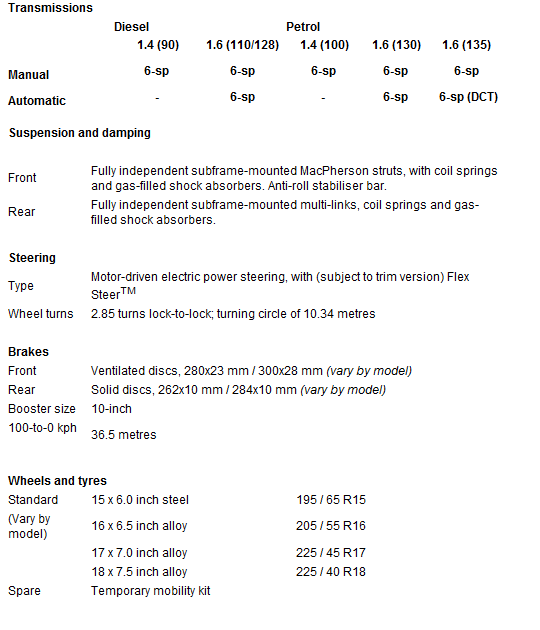 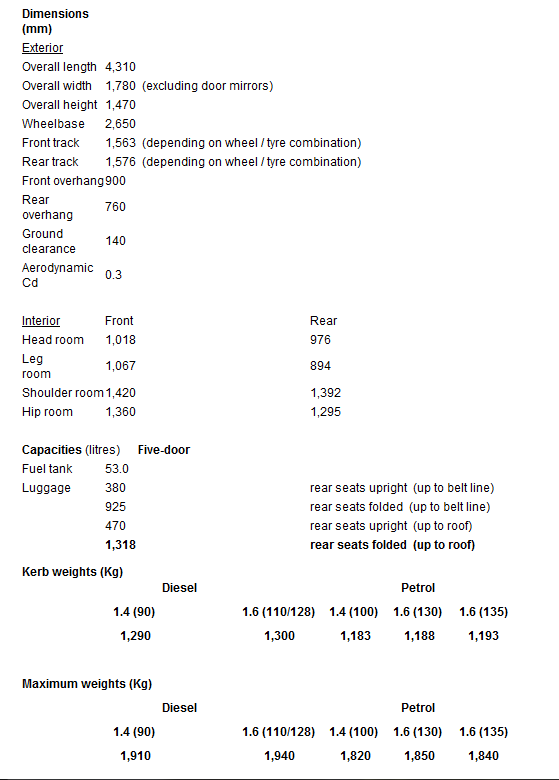 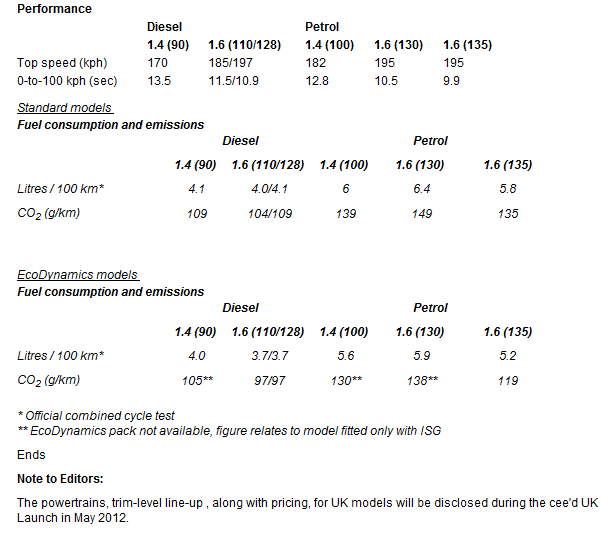 ← Prev: The 2012 Kia cee'd SW to debut at the Geneva Motor Show [Updated] We attended to the official new Hyundai i30 event and party. →