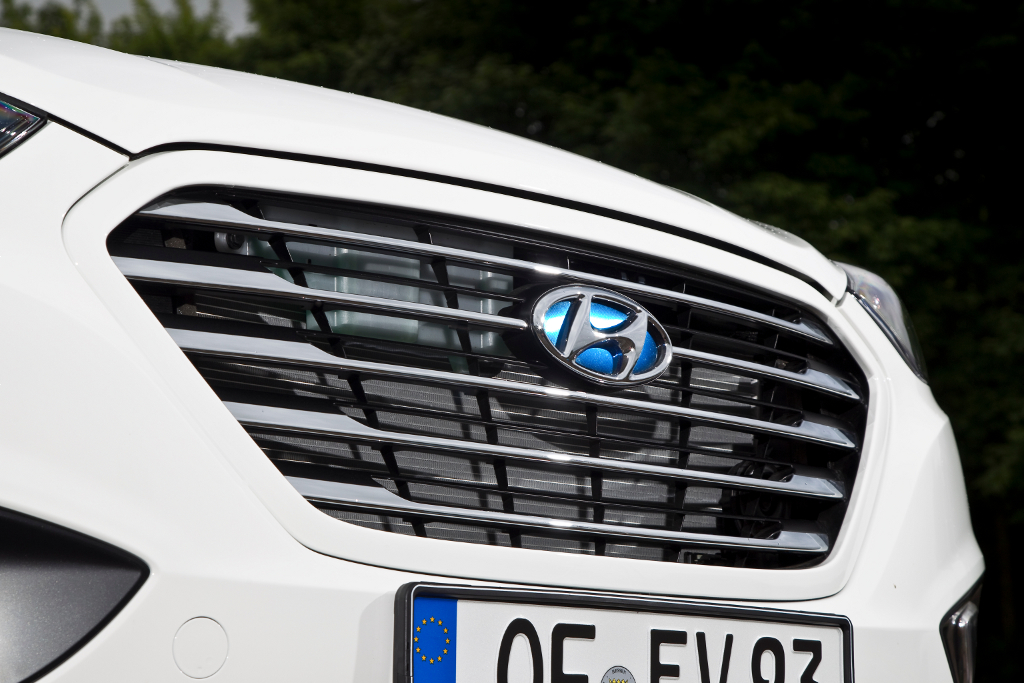 At first glance the Hyundai ix35 Fuel Cell looks just like every other car that rolls off the assembly line in Ulsan, Korea. There are a few subtle changes – the blue-tinged badging, the grille and the lack of an exhaust pipe for example – but essentially it looks identical to the petrol and diesel-powered examples built on the same line.

[ads id=”0″ style=”float:left;padding:5px;”]And that is as it should be. The design philosophy behind the world’s first series production ix35 Fuel Cell vehicle is that it should look, drive and behave just like a conventional car, demanding no compromises from its driver. It should also offer similar performance and range of any other conventional petrol or diesel model.

The one big difference, however, is that it produces no tailpipe emissions. The result of intensive development since 1998, the first production ix35 Fuel Cell rolled off the line at the end of February 2013. The white ix35 was the first of 17 examples destined for fleet customers in Copenhagen, Denmark and Skane, Sweden where local authorities have started an extensive hydrogen project. 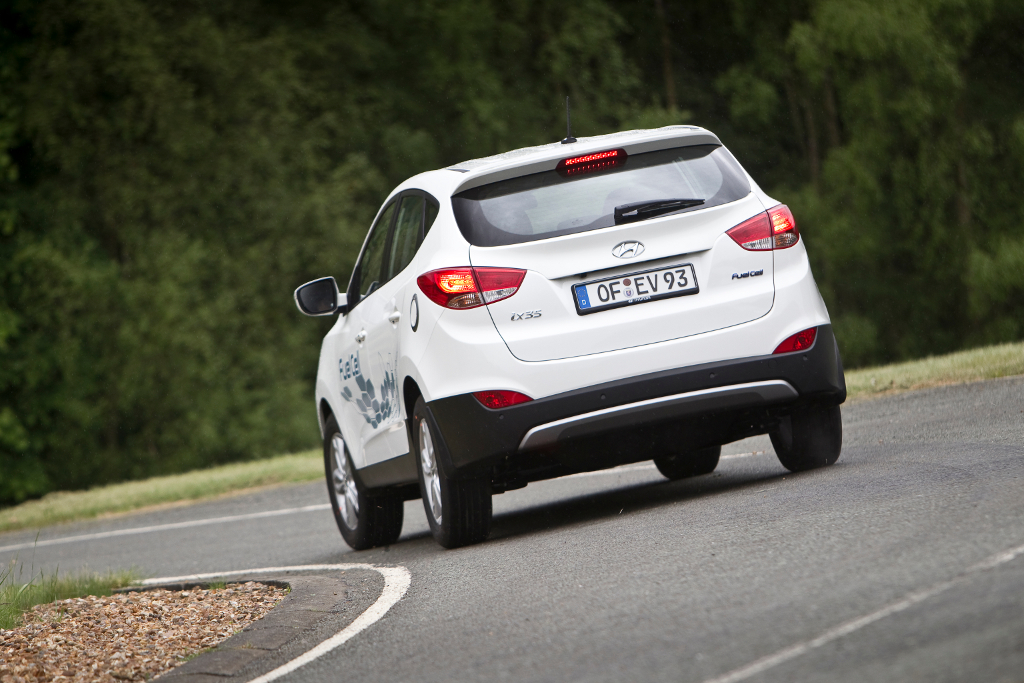 The car and its driveline was engineered at Hyundai’s fuel cell R&D centre in Mabuk, Korea. The concept has already logged more than 2 million miles of testing under real-world conditions in Europe, Korea and the US.

Between now and 2015, Hyundai has committed to produce a total of 1,000 ix35 Fuel Cell vehicles to be available across the globe – many in Europe – where they will take part in similar trials as a sustainable Hydrogen Road Map is established. It is the intention that five vehicles will soon be tested on the streets of London, with more planned for delivery before the end of the year.

The ix35 was chosen as the basis for Hyundai’s first Fuel Cell vehicle partly due to the appeal of the conventional car. Part SUV, part family car, ix35 combines practicality and style in equal measures.

In creating the Fuel Cell version, Hyundai’s engineers have ensured that the installation of the fuel cell stack, hydrogen tanks, batteries and other key control systems of the drivetrain have not impacted on the usability of the car.

The fuel cell is located under the bonnet, alongside other components such as the high voltage junction box and the compact electric motor which drives the front wheels. The high voltage battery and inverter system are housed in a waterproof casing, underneath the vehicle and mid mouinted for optimum weight distribution.

The major components of the fuel cell itself are the negatively charged anode and a positively charged cathode, with a proton exchange membrane (or PEM) sandwiched between the two.

Hydrogen is drawn into the fuel cell stack, where it passes over the anode. At this point, the electrons within the hydrogen molecules are passed along the anode, whilst the hydrogen molecules protons are passed through the proton exchange membrane. The electrons continue to flow along the anode, through an electrical circuit and then along the cathode. It is this flow of electrons that produce electrical charge to both the onboard battery and the motor. The electrons join again with the protons that passed through the PEM and react with air from the atmosphere, producing water vapour. 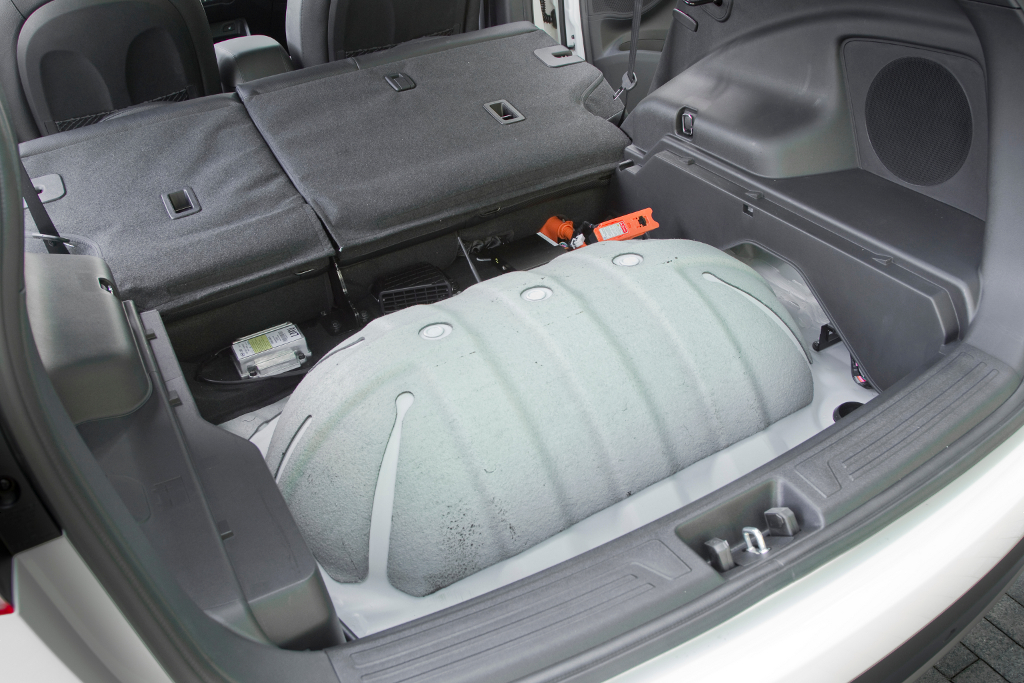 [ads id=”0″ style=”float:left;padding:5px;”]Heat is generated during the fuel cell stack operation, which can affect its efficiency. In the ix35 Fuel Cell, the TMS maintains the temperature of the fuel cell stack at an optimal level and has a number of different elements, including a stack water pump with a three-way valve that directs cooling water to different locations depending on requirements.

A fuel cell vehicle also requires a reliable supply of air (oxygen) for the electrochemical reaction within the fuel cell. The ix35 Fuel Cell APS consists of a near silent and quick response blower and shut off valve, which shuts down air flow when the vehicle is not in use whilst a high grade air filter blocks particulate matters and chemicals such as SO2 (sulphur dioxide) from entering the fuel cell. 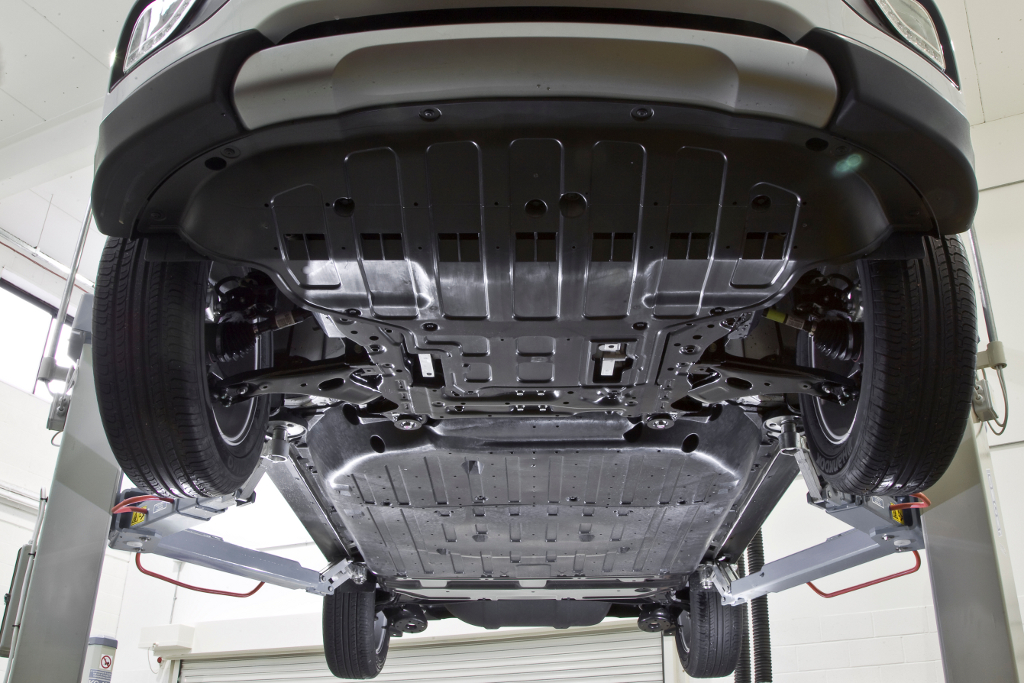 Lithium-ion batteries are mounted low in the centre of the car for optimum weight distribution and to provide a low centre of gravity. The ix35 Fuel Cell also has a conventional 12v battery located in the boot, which is used for starting and for powering ancillary devices such as the navigation system.

There are two inter-linked hydrogen gas tanks that are made from carbonfibre and aluminium to save weight without compromising strength. One is located under the luggage floor and the second, smaller, tank is ahead of the rear axle. Together they hold 5.6kg of hydrogen at 700 bar: enough for a range of 594 kilometres (369 miles).

Fuel consumption figures can be difficult to translate into traditional km/l or mpg figures, however to do so requires the comparison of the energy content of hydrogen and petrol. With a range of 594km and a tank capacity of 5.6kg of hydrogen, it equates that 1kg of hydrogen will deliver 106km of range. Hydrogen has around the same energy content of 3.7 litres of petrol, therefore this would give a “traditional” figure of 28.6 km.

Performance is similar to a conventional ix35, with the fuel cell’s output of 100kW (136hp) giving a top speed of 100mph whilst 0-62mph takes 12.5 seconds, with 300Nm, of torque being available from a standstill. And there are no tailpipe emissions

The Fuel Cell vehicle is heavier by 100 kg than the conventional ix35 and the hydrogen tank under the boot floor is larger than a petrol or diesel tank. This means a luggage capacity of about 436 litres. All ix35 Fuel Cell vehicles produced will be left-hand drive only at this stage. 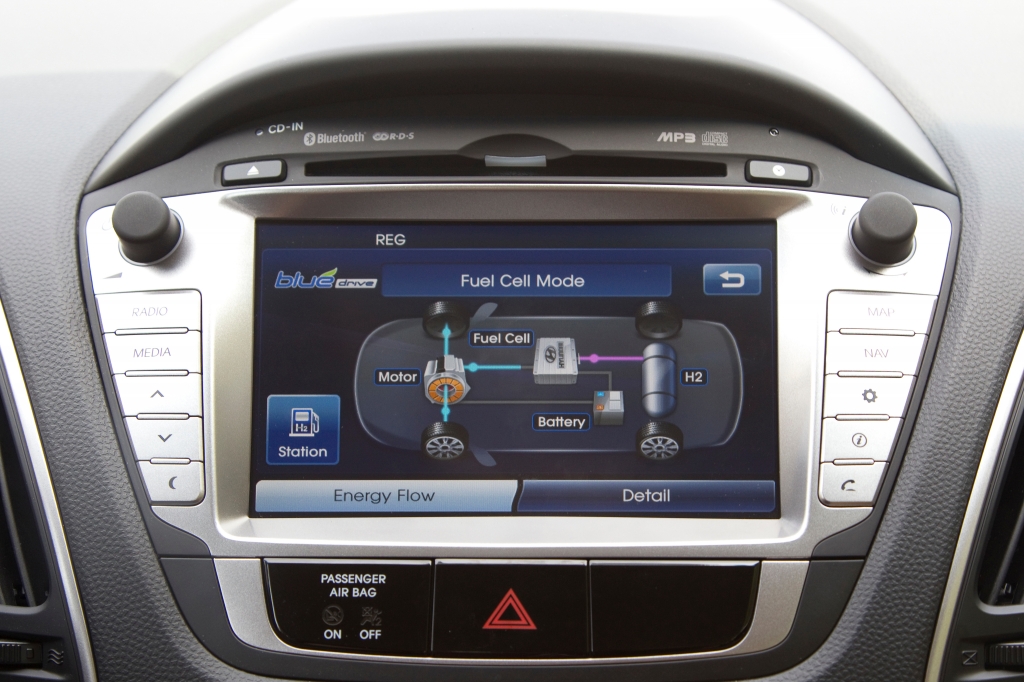 The ix35 Fuel Cell has several modes of operation:

Under deceleration and braking, Regenerative Braking Mode allows kinetic energy to be converted back into electricity by the motor and inverter and is stored in the battery.

From the driver’s seat the only significant changes are to the instrumentation, with different dials showing the levels of charge or power recouped during regenerative braking depending on the operation mode of the vehicle, and the single speed transmission.

Eok Jo Kim, Hyundai Motor Vice Chairman, said: “With the ix35 Fuel Cell vehicle Hyundai is leading the way into the zero-emissions future. “The ix35 Fuel Cell is the most eco-friendly vehicle in the auto-industry and proves that hydrogen fuel cell technology in daily driving is no longer a dream.”