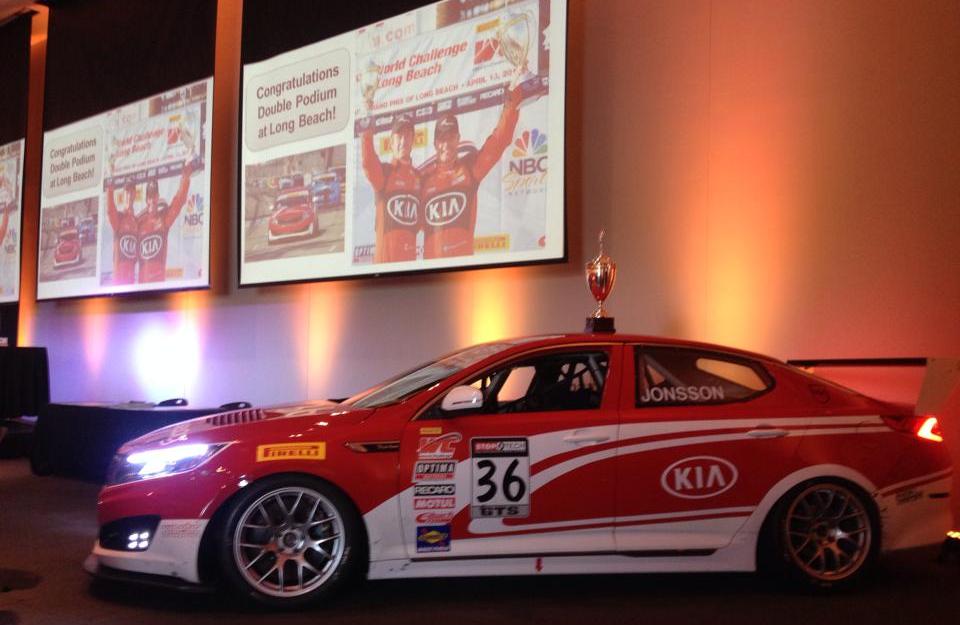 “It’s so satisfying to win here at Long Beach, just a few miles from Kia’s U.S. headquarters down in Irvine (Calif.),” said Jönsson, who scored Kia Motors America’s (KMA) first professional road racing championship in the U.S. in 2011. “Last season was pretty rough for me. The car was strong, and Mark (Wilkins) scored well, but we weren’t able to post those kind of results, so it’s fantastic to get back into victory circle. And to be able to share it in-person with all of the KMA team members is just outstanding.”

Jonsson qualified his No. 36 DonorsChoose.org Optima turbo second among the 20-car GTS-Class field and turned the fastest lap of the 50-lap contest with a 1:27.918 on the 1.968-mile, 11-turn temporary street circuit in downtown Long Beach. Wilkins qualified the No. 38 B.R.A.K.E.S. Optima turbo seventh and ran most of the race among the top five before making a last-lap pass to score his first podium finish of the year and giving Kia Racing a double podium on its home track. 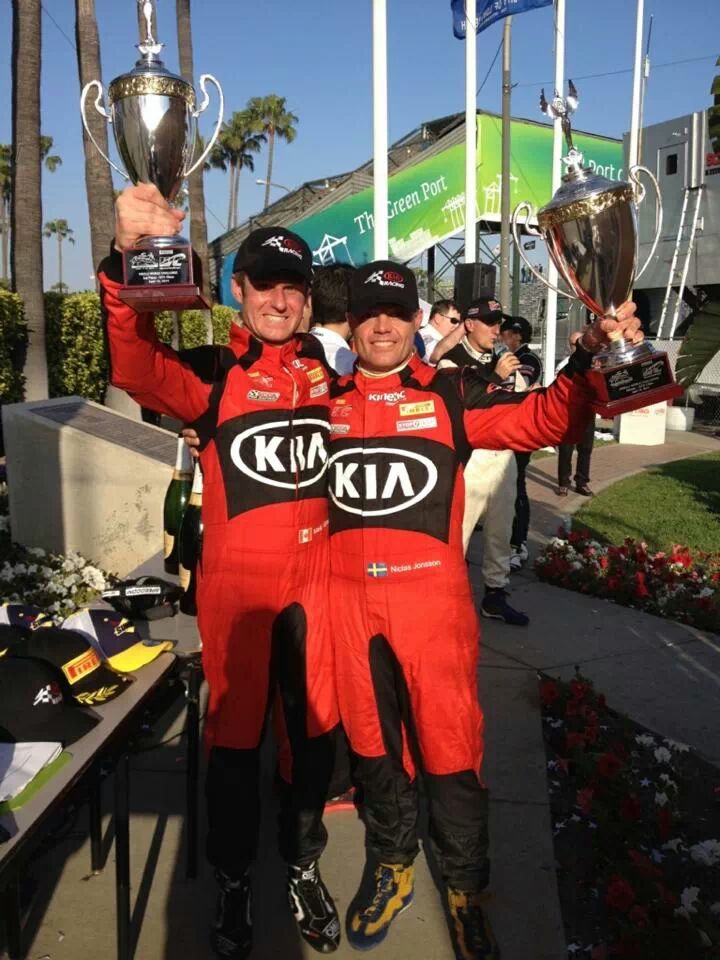 “This was really great weekend for Kia Racing and for Kia as a whole. With their headquarters close by and the turnout of fans we had cheering us on, it was just incredible,” said Wilkins.  “We keep showing how really well built the Optima is. We worked hard during the off-season to get the most out of the car, and it’s paying off right now.  With the improvements we made in handling, the track suited us a little better this year than last. I’m happy for Nic to get the win, and we’re all looking forward to the next race, down in Alabama, which is another home race of sorts for Kia because it’s close to their U.S. manufacturing plant in West Point, Georgia, where our Optima racecars were first built.”

With both turbocharged Kinetic Motorsports Optimas having scored hard-fought top-ten finishes at the 2014 Pirelli World Challenge season opener in St. Petersburg, Fla., the team has momentum heading into the next race at Barber Motorsports Park in Birmingham, Ala., April 25-27.

Televised coverage of the “Roar by the Shore Presented by Kia” on the Streets of Long Beach will be broadcast Sunday, April 20 at 5:30pm ET on the NBC Sports Network.  Race fans can also watch coverage of the races online at www.world-challengetv.com and catch the latest news and updates from the Kia Racing Facebook page at www.facebook.com/kiaracing and follow the team on Twitter: @KiaRacing.

Also we want to congratulate Kyle Keenan driving the Kia Rio B-spec at the US Major Tour series placing 2nd place with a very competitive race with driver Derrick Ambrose.

Edit: We spoke to Kyle this morning and there is some info missing, this is what he told us.

“Hey Erick, thanks for the post! Just a correction: We won on Saturday, and finished 2nd on Sunday. It was what we call a “double” race weekend, so two races total. “ 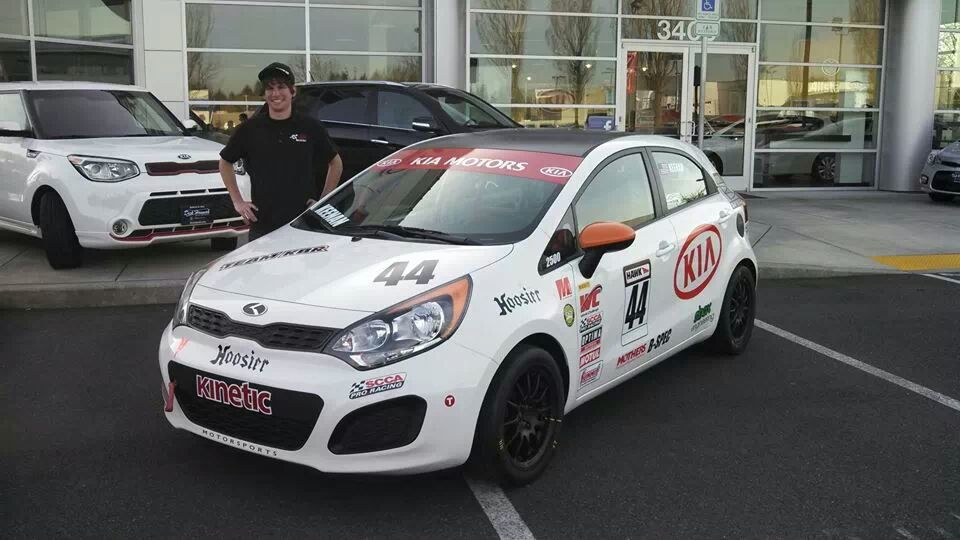 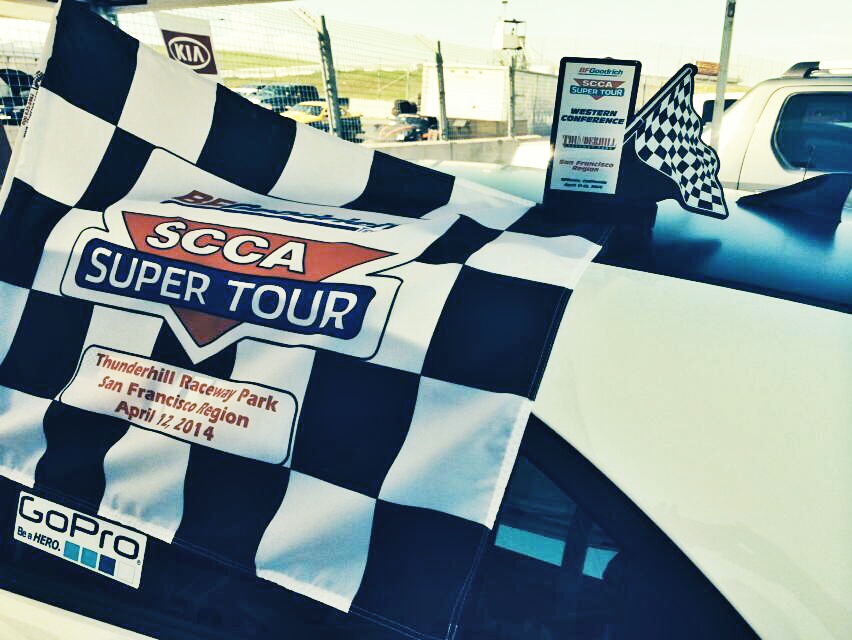