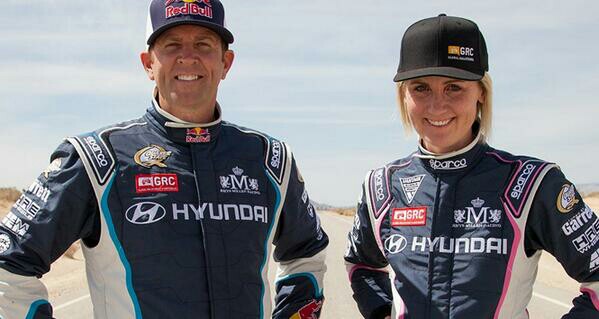 Rhys Millen aggressively piloted his Hyundai Veloster rallycross car into the ultra-competitive final round of the Global Rallycross Championship race on the idyllic Caribbean island of Barbados. Millen’s teammate, Emma Gilmour, also had an impressive performance at her debut in Global Rallycross, becoming more competitive in every round as the series’ first female driver.

The team’s Veloster rallycross racers proved their performance and durability once again, going wheel-to-wheel with the best in the industry. Held at the Bushy Park Circuit in Barbados and operated in conjunction with the BBC’s Top Gear Festival, Hyundai’s Rallycross team battled 14 other cars and drivers across two days of racing through dirt, mud, sand and concrete.

“We’re proud of our team’s performance for the first race of the 2014 season,” said Millen. “The competition was intense in the final, and I always enjoy the challenge of going up against some of the best drivers in the world. As thrilled as I was to rub fenders in the final, it’s even more satisfying to have my teammate, Emma Gilmour make dramatic improvements each race amidst such formidable competition. We’re already making adjustments for the X-Games in Austin, both in strategies and tuning.”

The Hyundai/Rhys Millen Racing team will compete in every race of the 2014 Global Rallycross season. Millen, Gilmour and their Veloster rally cars will continue the momentum-building next month at the inaugural X-Games Austin with even more vigor. Taking place June 7, the second leg of the 2014 Red Bull Rallycross championship will be held at the newly created Circuit of the Americas complex, with new challenges and opportunities for the team.

← Prev: Hyundai Will Discontinued 2.0 Turbo Engine on the MY2015 Genesis Coupe Exclusive: Kia to Debut Next Generation Sorento in August →