Last summer I traveled to Montgomery, Alabama for the All-New Sonata media presentation where we had the opportunity to do a tour at the manufacturing plant, watching part of the process how Hyundai makes the Sonata from scratch, from the stamping process through the assembly.

[ads id=”0″ style=”float:left;padding:9px;”]In this opportunity we were invited to the very sunny city Huntington Beach in South California to find what the 2016 Hyundai Sonata Hybrid & Plug-In Hybrid new models are all about in saving you some gasoline’s money for those daily commute from home to work.

We find Hyundai’s Fluidic Sculpture 2.0 Design just like the Gasoline version with few changes to improve perfomance and apparence. The first facelift you’ll notice will be the front fascia with the same upside-down trapezoid grill but with an extra block below that extends to almost the bottom of the bumper, next will be a new shape headlights plus a new rocker panels on the side.

The back now has a new aero bumper with a larger diffuser hiding the exhaust pipes. One of the things you’ll love, like i did, will the be clear tailights and more than likely a lot of people will be replacing theirs with this one. Last but not least, there is a new eco-spoke alloy wheels for the hybrid. I feel these new changes might be more appealing compare to the gasoline version.

All of these changes were not just for the looks but also to improve on the aerodynamics of the car, thanks to them the coefficient drag has dropped to 0.24 that is 0.3 lower than the gasoline model and matching the Tesla Model S.

The Sonata has gone bigger from the inside and out, making the Sonata a little more roomier than before. The exterior and interior will get new colors, for example the HEV has the Graphite Blue Pearl and Seaport Mist, the latter also been available on the PHEV. A new exclusive interior color for the Sonata HEV and PHEV is available, Blue Pearl in which we had the opportunity to have in our drive on the HEV Limited. I really enjoyed my driving looking at that deep blue and the ocean view on my window, I feel this will be a color some people will enjoy. 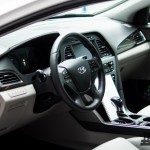 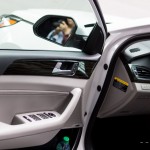 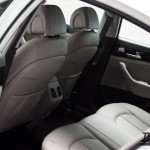 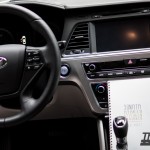 The first Sonata we drove was the Diamond White Pearl PHEV with power front seats and Driver seat memory, vetilated front seats and heated steering wheel. For powertrain it uses the 2.0 Theta II GDI engine for gasoline with 154 of HP and 140 of Torque, and an electric motor with 50 kW with a higher capacity Lithium-ion Polymer batteries at 9.8 kWh. Hyundai showed us an internal estimate of 24 miles all-electric range, 93 MPGE and 40 comb MPG.

For the HEV model, we choosed the Seaport Mist color and it was the Limited version so it came Panoramic sunroof, heated front and rear seats and rear window manual sunshades. For powertrain we also find the Theta II GDI engine with an electric motor pushing 38 kW but with an smaller capacity of 1.62 kWh compare to the Plug-in model. As far as fuel economy, Hyundai said it’s 39/43/41.

Hyundai tried something new with the transmission for the Sonata Hybrid, in this case we find the 6-speed A/T compared to the competition which uses the e-CVT. I can say that driving through the gears felt good, not much of a difference from the gasoline version.

Now Inside the cockpit both cars are very similar to the gasoline only version, its very silent but now with the electric motor it feels weird quiteness of the engine starting and that was exactly what happend when my partner Jason Sasaki turned on the PHEV for the first. Both models are equipped with safety features like individual tire pressure, Blind Spot Detection, Lane Departure Warning, Rear Parking Sensors, Auto High Beam, Forward Collision Warning and a new Virtual Engine Sound System ( this will help pedestrians hear the Sonata when it’s near by). 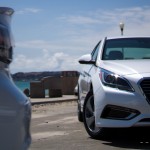 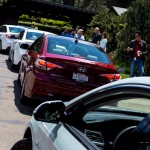 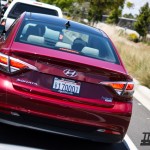 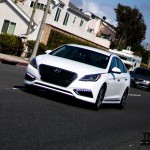 When buying a hybrid can sometimes be difficult to understand them (specially if you are new on hybrid cars) but once we took the car on the road looking at screens it was really easy to understand how the Sonata is working plus how to improve my driving for all those golden mpg.

The first thing you’ll notice at the instrument cluster is the tachometer is replaced by the new Vehicle Energy Gauge that indicates the system power levels and regenerative energy capture, and below we have the battery state-of-charge replacing the engine temperature.

It also have the same the multi-info display screen found on the gasoline version but with new options such as total range between electric and gasoline, energy flow animation showing power to the wheels between battery and gasoline and driving style, this one clasify with a percentage the way your steeping on the pedal on economical, normal and aggressive. We flipped through those options using the steering wheel button.

The Navigation system is also the same as the Gasoline version but with a new screen option only available for the PHEV, where it shows in greater details how your Sonata is performing. The Eco Driving will show us different mpg graphs and a history of your mpgs by dates, and the Energy Information is an animation when your driving on full electric motor or gasoline engine as well as recharge through the regenerative braking (I should mention that the recharging using the brake was making a loud noise and some vibration feedback that for some might be a very annoying but we were told these pre-production models and there still room for improvements).

Also there is an extra button below the shifter call HEV, which provides drivers a selection between Electric, Hybrid and Battery Charge mode (this mode will charge the battery while using the gasoline engine). And talking about charging, poping the door at the driver fender, at the charging station the PHEV’s batteries can be fully charge in 3 hrs using 240V and 9 hrs with 120V (there is a charging cable kit at the trunk). Right next to the HEV button you also have the drive mode, which has eco, normal and sport.

One thing most people will be glad to know in comparison to the competitors, Hyundai is offering a hybrid lifetime warranty to all those lithium-ion batteries in which none of the competitors are providing.

We all know batteries can take a large space on your car and most competitors have sacrifice the cargo room but Hyundai in the other hand has accomplished a flat cargo floor on the HEV model, and even the PHEV model been reduced due to carrying more batteries, still have a decent size for your cargo.

The Blue Link application on your phone has a new feature on the PHEV, is call Blue EV. This will show the charge status on your car but best part of all you can schedule to either charge to full or stop at a specific time. This is great feature for those who like to control their electricity bill since some has the option of reduce or free electricity cost depending on the time.

Hyundai did not mention prices but they said it will be competitive to other automakers. Along with that, they mention PHEV owners are elegible to different federal tax credit and possibly state as well, with a total approximately above of 4,000 dollars.