As we told you, Hyundai has a new twin-turbo V6 engine under development and will add to its Hyundai Genesis sedan turbo in 2017. We just nabbed our first concrete, physical evidence during hot-weather tests in the California desert.

[ads id=”0″ style=”float:left;padding:9px;”]The camouflaged Hyundai Genesis sedan Turbo is fitted with a new front-fascia design, which makes room for a newly-applied intercooler–visible through the lower air-intake below the prototype’s revised grille. The new engine will launch in conjunction with a thorough facelift, likely due in 2017 for the 2018 model year.

This prototype represents real-world confirmation of a story that we were published here this past April. In the story, Hyundai CEO Dave Zuchowski detailed the Korean automaker’s move to smaller turbocharged engines to save weight, improve fuel-economy, and lower emissions to meet tougher regulatory standards.

Some outlets wonder if Hyundai will turbocharge its existing 3.8-liter V6, while other outlets point to a new 3.3-liter twin-turbocharged unit reportedly in the works, but Hyundai showed a 3.3 Twin Turbo engine at the Detroit Auto Show in January. Regardless, Zuchowski had promised that the new, turbocharged V6 would generate enough power to match the 420-hp of Hyundai’s 5.0-liter Tau V8–likely signalling the Tau V8’s demise at the time of the Genesis sedan’s mid-cycle facelift.

The prototype photographed here was running with a camouflaged interior, but we managed to get a peek at the dash with the camo pulled back. From what we can see, no significant changes have been applied just yet. However, this is clearly an early prototype that is focused primarily on developing the new powertrain. Fine-tuning the creature comforts will come later, as updates are expected to be added to prototypes closer to the production date. 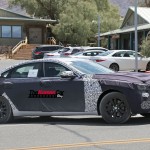 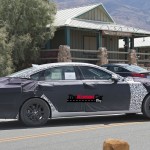 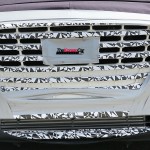 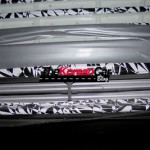 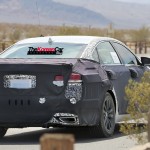 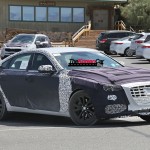 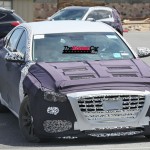 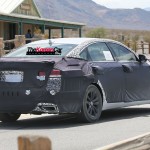 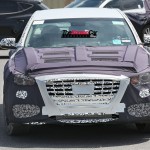 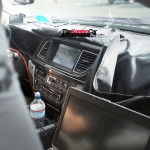