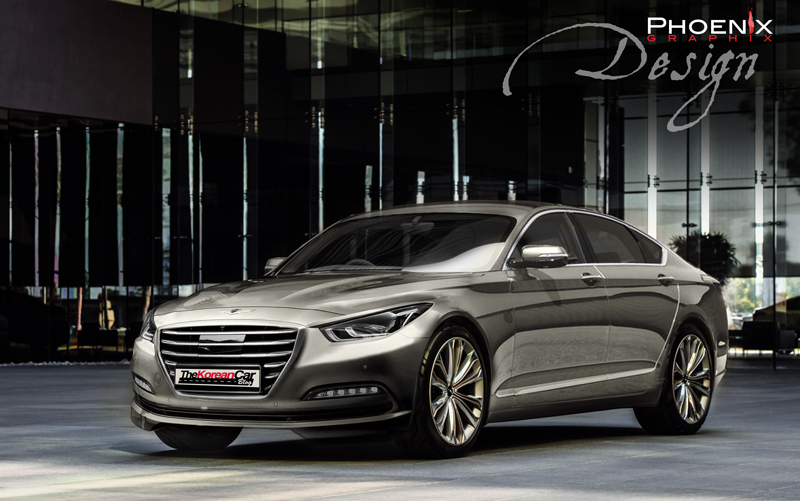 The new Genesis EQ900 is almost out and we asked our good friend Ozzie from the Phoenix Graphx to visualize the new model soon to be shown in december.

[ads id=”0″ style=”float:left;padding:9px;”]The new Genesis EQ900 is almost out and we asked our good friend Ozzie from the Phoenix Graphix to visualize the new model soon to be shown in december. This was made from the sketches, veiled preview and the camouflage. We have the same hexagonal signature grill from Hyundai but this time even larger and on top the Wings Genesis emblem.

The headlights will come with HID as standard, looking at headlights we have a new design with DRL lights running across. Down below we get a LED for fog lights, something very similar to the Genesis sedan.

We feel there is a strong influence on the G90 from the concept model Vision G Coupe shown in Los Angeles, the front and side of the coupe has been emboided to the G90. The dimension for the Genesis G90 are 5,205 mm long, 1,915 mm wide, 1,495 mm high, with a wheelbase of 3,160 mm.
Just like all new models from Hyundai Motors, the new G90 will sport about 51.7% of the high-strength steel making the G90 lighter but at the same twice strong.

This EQ900 will compete with the BMW 7 series, Mercedes Benz S-class and Lexus. It was said there won’t be an increase of prices, so we are expecting a starting price of 61,500 dollars.